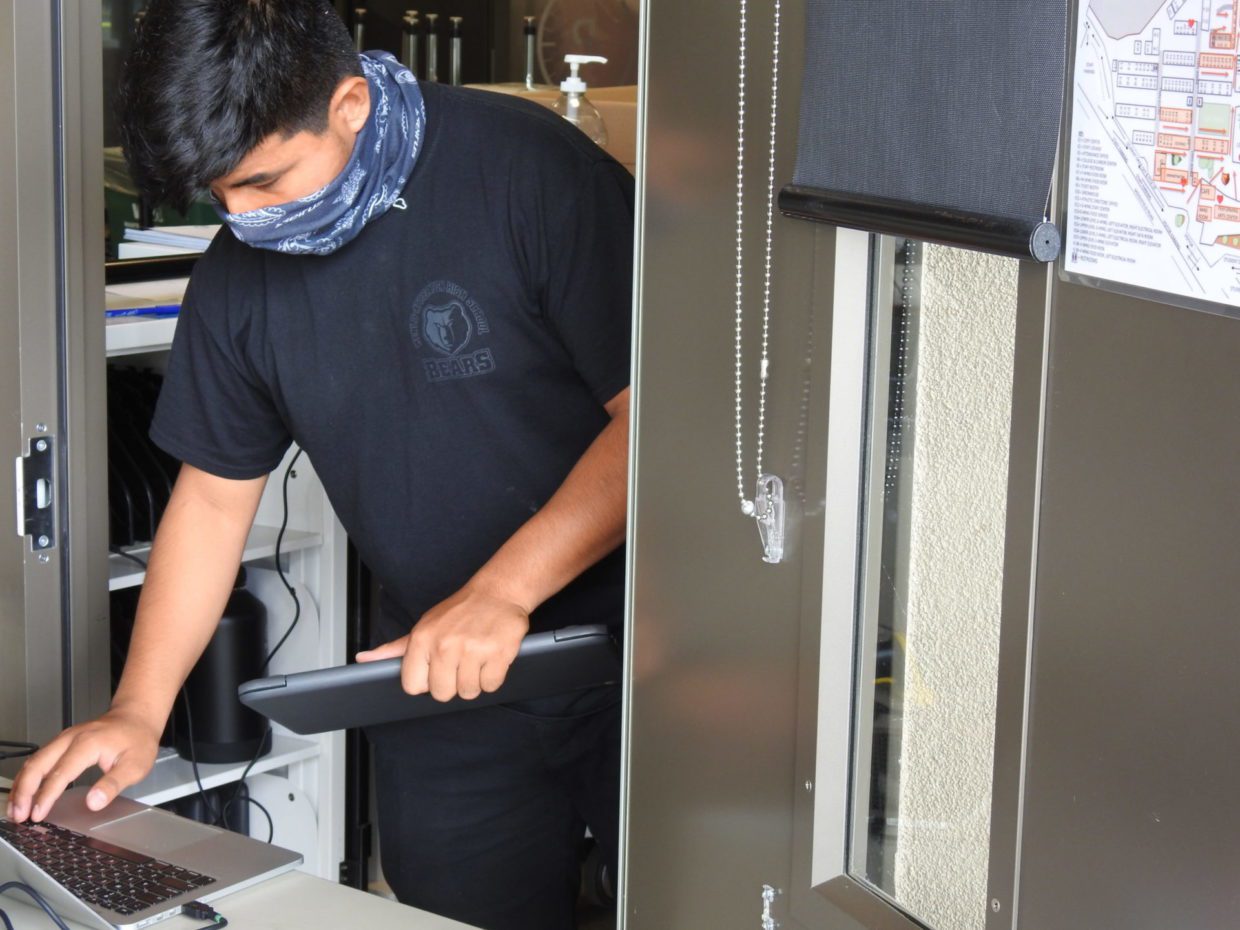 According to Buzzfeed News, “a survey by the county found that 2,000 students, or 20% of households, in the Sequoia Union High School District (SUHSD) had no internet access at home.”

The start of online learning has presented many tech issues in the SUHSD community and required the District to distribute 516 hotspots to students lacking internet connection.

In the Spring semester, when M-A first started distance learning, school was primarily asynchronous assignments like videos, reading, and quizzes. Once the Fall semester started, classes transitioned to zoom, with a specific schedule each day.

“Before receiving my hotspot, my WiFi wasn’t great because there were other people in my family doing school or working from home. This usually caused me to be late or I couldn’t turn on my camera because everything would glitch,” said junior Gaby Martinez. To resolve internet access issues like Martinez’s, the District gave chromebooks and hotspots to any student who requested them. In the Spring, the hotspots that were distributed had a limited amount of bandwidth, but the District transitioned to hotspots with unlimited network in the fall.

In addition to providing hotspots, SUHSD and SMCOE are setting up a broadcast network of public WiFi in EPA and Redwood City in order to make it easier for students to get online. Teacher John Giambruno, who represents M-A on the District’s technology committee added, “We should have had this solved years ago, but it took COVID-19 for the realization to happen. High speed internet is a necessity and should be treated as a public utility, like water or electricity. Social distancing has highlighted what many of us assumed was shrinking: the digital divide.”

Principal Simone Rick-Kennel explained, “We have provided hotspots with unlimited bandwidth and connected families to the Comcast Internet Essentials program; the district picks up the cost for the monthly fee. M-A has another 75 T-Mobile hotspots on order. A T-mobile hotspot initially costs $84 and then $15.17 per month.”

While M-A and the District has supported students who have poor internet access at home, there have been minor issues with the unlimited hotspots they distributed, like their connection cutting out occasionally. One student said, “While I’m happy the school has given me internet access, sometimes it will cut out, and the sound will stop, even though I didn’t leave the class. This causes me to miss some class time, which other students around me don’t have to deal with.”

Kennel added, “Students have told us that sometimes getting into breakout rooms takes more time and that their voice quality sounds robotic with the Sprint hotspots. This could also be due to location within a residence, like concrete walls or dead spots in which WiFi access might be compromised.”

The problems with the hotspots distributed in the Spring was their original lack of bandwidth, as well as the type of hotspot each student received. While the students who were given hotspots with limited data received new unlimited hotspots, the District is making accommodations for the students who live out of reach of Sprint Towers.

Reyes added, “Sprint coverage is very bad in some areas like East Palo Alto and in areas close to Facebook in Menlo Park. The students who live in those areas are given a T-Mobile hotspot. The hotspots we are distributing are the same as what we were giving out in the Spring, the only difference is that both the T-mobile and Sprint hotspots now have unlimited data. Sprint hotspots will continue to be distributed to students in areas close to their towers.”

Other students have yet to run into any issues at all with their unlimited hotspots. Junior Vivianna Luna said, “My hotspot has been working well and it does not cut out. I am able to attend to zoom classes without my internet being unstable. I think that the school is doing a good job of handling internet problems, the hotspots are a great example.”

Despite malfunctioning hotspots presenting some issues, almost all students have faced at least some problems with technology. AS English II teacher, Susie Choe said, “It’s true that a hotspot might have a bad signal one day and the student misses out on instruction. I’ve also had students in my AS class who had tech issues in Menlo Park with the fires. Everyone is having tech issues, including teachers.”

While the “digital divide” in the SUHSD is still yet to be resolved, the District will continue to distribute hotspots and is still working to help all students gain access to their assignments. Giambruno added, “Hopefully, accessible wifi and hotspots help to shrink the divide, but we’ve still got a long way to go.”