Keeping M-A running with close to 2,500 people requires a lot of effort— a combination of the work of classified staff, teachers, and the administration. But too often, students forget the hands behind it all: the M-A custodians. As part one of our Heroes of M-A series, we will be profiling Jesús García, also known as Primo.

García works at M-A during the day and Las Lomitas Elementary School at night, which is why many M-A students are familiar with him. Most do not know, however, that he works 16-hour days Monday through Friday to help keep both schools clean.

6:15 a.m. – He arrives at M-A and starts cleaning the new gym, the new dance studio, and the training room. They have to be ready before classes start.

7:30 a.m. – García starts checking the outside garbage cans and empties them if they are full.

8 a.m. – He has a short break. After break, he checks the outside garbage cans and puts a new liner in them for the day. He also checks for any graffiti that may have occurred overnight. “Sometimes kids will go into the bathrooms after school and [graffiti the walls],” he said. It is his job to remove the vandalism before morning.

9:30 a.m. – During brunch, García checks in on students and helps collect their trash. Usually students are good about not littering, but sometimes that is not the case. He explained, “Sometimes I train them, I teach them not to leave a lot of trash.” It usually takes a few reminders, but García finds it very gratifying to see former litterers throwing away their garbage in the bin. 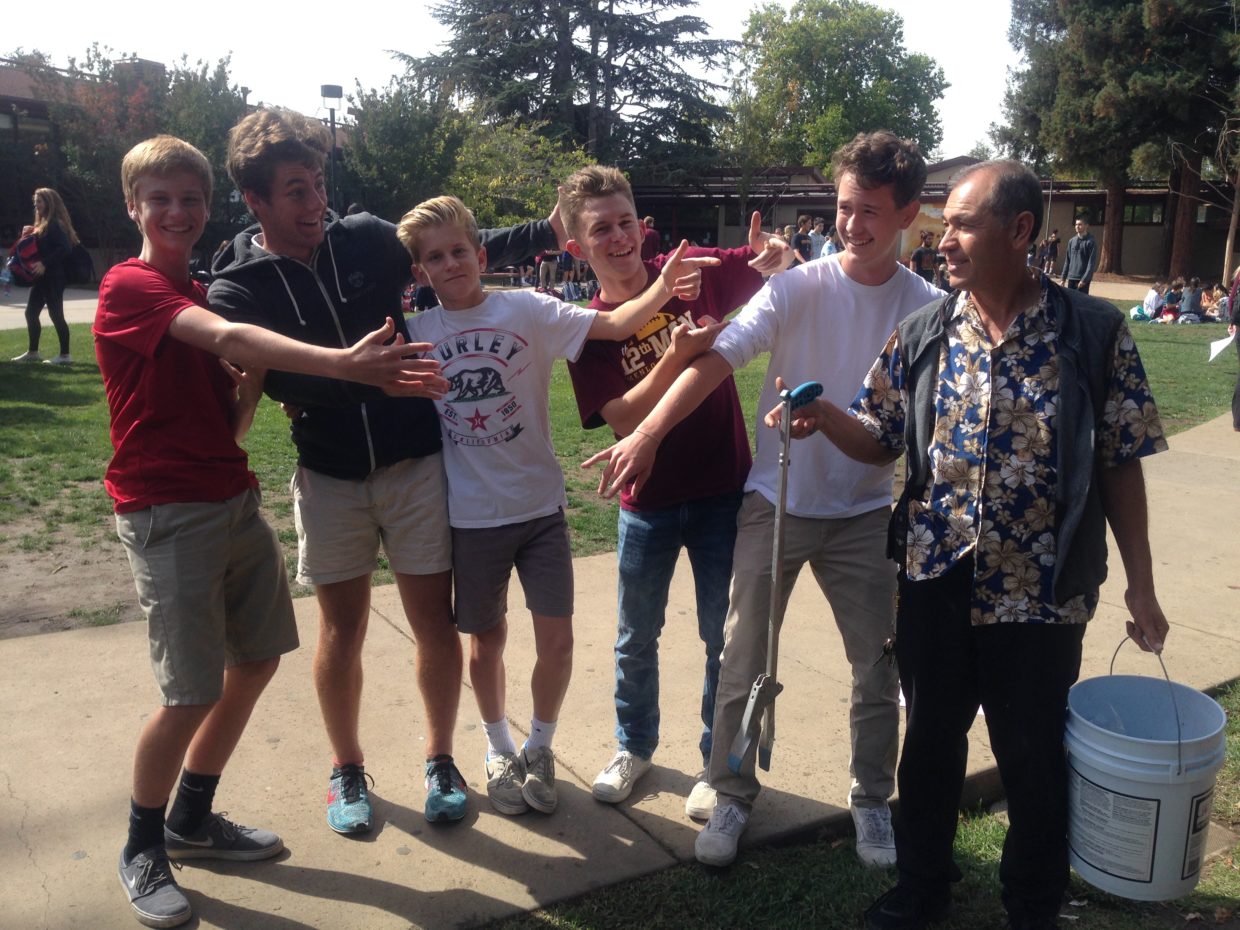 García is popular among students for his friendly nature. He calls them all his “primos” (Spanish for “cousins”) because it is too hard to remember the names of more than 2,500 students.

10 a.m. – García gets another break, and during this time he runs about five miles through the neighborhood. He likes to jog with Stephanie Owens, a new science teacher at M-A.

10:45 a.m. – He checks the blue recycling bins and lines them up so that the trash collectors can come by and get them.

11:15 a.m. – García cleans the bathrooms. After some complaints a few years back about the cleanliness of the restrooms in Pride Hall, García now cleans them after brunch and lunch. He is proud to say that since then, no one has complained.

12:50 p.m. – At lunch, García walks around campus with a bucket and a trash picker, collecting litter and approaching groups of students “so they don’t need to get up and go to the trash can.” Sometimes, he walks around with another student helping him collect trash if said student was caught littering or had too many tardies. Most of the time students are very respectful and friendly with him, but he does recall an incident several years ago, where he told a freshman to pick up his trash and the boy retorted “that’s your job to pick it up.” García makes it very clear that his job is not to collect individual students’ trash, but rather to keep the campus clean as a whole.

García makes his rounds at lunchtime and collects trash from students.

1:30 p.m. – The last thing he needs to do before heading over to Las Lomitas is clean the bathrooms one more time.

2:30 p.m. – García arrives at Las Lomitas, where he is one of two night custodians. He spends the next eight hours cleaning classrooms and bathrooms to be ready for the next day.

While there are seven night custodians at M-A, Las Lomitas only has two. The Las Lomitas custodians are on a tight schedule; they are given 12 minutes to clean each classroom, 15 minutes for bathrooms, and 30 minutes for larger rooms such as the library.

García said the hardest part of his job is when he is sick or takes a day off work. He is still expected to clean as usual upon return, but there is double the work to do, and it can take him a whole extra day to get caught up. Despite this challenge, García explained the most rewarding part of his job: “[It is rewarding] when I’m helping all of the students because each piece of garbage they put in my bucket is a piece of garbage I don’t have to pick up,” he laughed.

Work also has a fun element — every Thursday, all the custodians and campus security wear Hawaiian shirts, keeping the work environment light.

García is a dedicated worker, having been at M-A for 16 years, and Las Lomitas and La Entrada Middle School for eight years. “I’ve watched people grow up… I see their faces [at Las Lomitas] and then again at M-A.” Given that he develops such strong relationships with some students, seniors sometimes ask García to hand them their diplomas during graduation. Some M-A alumni come back and visit him when they can.

Many people don’t know the lives and stories of people who work so hard to make M-A the school it is. For more profiles on the M-A custodial staff, follow up on our Heroes of M-A series.