Warning: this article contains spoilers for season one and the first episode of season two of Westworld.

Westworld is known for its intentional withholding of plot information, ambiguous timelines, and dramatic cliffhangers. The 2016 season one finale gave viewers some vital information, including the fact that the nine previous episodes had taken place in two different timelines, and that the mysterious Man in Black (Ed Harris) is actually William (Jimmi Simpson), aged 30 years. However, new developments Dolores’ (Evan Rachel Wood) unexpected murder of the park’s founder, Robert Ford (Anthony Hopkins) and the reveal that there are multiple parks similar to Westworld, each simulating a different culture, opened a new world of questions which viewers have waited two years to have answered. Now, after the premiere of season two, few questions have been answered and many new ones have been raised. Here are the most important questions left unanswered after season two, episode one of Westworld.

How many timelines will play out simultaneously in season two?

The first episode of season two seems to follow in the footsteps of season one by jumping effortlessly between different timelines with no indication of where in the story a scene takes place. It already appears that there are at least two different storylines occurring at the same time: the immediate aftermath on the night of Ford’s murder, continuing at least into the following day; and the Delos clean-up mission two weeks later. However, there are many scenes that, while assumed to take place one or two days after the murder, are never explicitly tied to a timeline. In addition, the beginning of the episode shows a series of quick-cuts featuring interactions between Dolores and Bernard (Jeffrey Wright) as she appears to help him come to terms with his existence as a host. Dolores and Bernard do not meet again in the episode, meaning these scenes could lead up to Bernard waking up on the beach, or they could even take place after the events at the end of the episode. 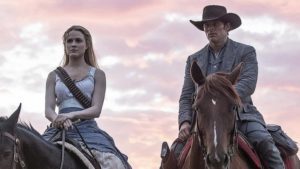 Dolores (Evan Rachel Wood) and Teddy (James Marsden) ride through the park together.

What happened in between Ford’s murder and the end of the episode?

The main purpose of this episode appears to be to set up the major plotline for the rest of the season, which will likely focus on exploring how Bernard comes to find the sea of drowned hosts and realize that he had killed them all. While Dolores and Teddy (James Marsden) had been riding around the park together, leaving a trail of destruction in what appeared to be the earlier timeline, Dolores is noticeably absent from the final scene while Teddy is the only drowned host that is positively identifiable among the crowd. Adding to the mystery is the fact Dolores had delivered a passionate monologue only a few minutes before, insisting to a skeptical Teddy that everything ends with the two of them. It seems likely that the sequence of interactions between Dolores and Bernard at the beginning of the episode is significant to his journey during the missing two weeks, however, it is unclear how Dolores and Teddy have become separated, as well as where Dolores is at the end of the episode.

Why are Dolores and Maeve the two hosts who appear to have gained consciousness?

Season one gave viewers extensive information about Dolores’ backstory and relationship with the park’s founders. It seems clear that Dolores is a special case as a result of her status as the oldest host in the park, as well as her close relationship with Arnold and the role she has played in both founders’ deaths. It seems that Arnold specifically imbued in Dolores the capability to gain consciousness, and Ford chose to awaken that capability. However, it is less clear why Maeve (Thandie Newton) has been able to gain the level of control that she has, as the show has not provided any reasons that Maeve is as inherently significant as Dolores. One significant scene from season one, however, shows Dolores beginning to act outside of her normal loop after hearing the phrase “these violent delights have violent ends” and repeats the phrase to Maeve in their only shared scene in the series. This quote from Romeo and Juliet is later revealed to be the voice command which activates Dolores’ “Wyatt” program, an alternate, more violent character which Arnold programmed in order to orchestrate his own death by Dolores’ hands. Although the quote is never implied to have special meaning for Maeve, she begins to act weirdly and gain more control over her actions and memories as the season progresses, indicating that someone may have altered her code in order to lead her to consciousness as well. 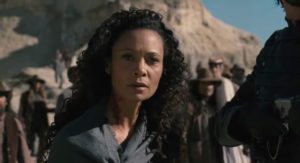 Are Maeve and Dolores truly conscious, or are they still following Ford’s program? Is this all part of Ford’s storyline?

This is the most significant question that will be explored as season two progresses. While the first episode of season two convincingly portrays Maeve and Dolores as though they have fully taken control of their actions, small clues may indicate otherwise. A scene from the season one finale in which Maeve is preparing to escape the park on an outbound train. As the human coders rebalance her character traits to help her escape, a new storyline appears on the tablet, which predicts Maeve’s next actions. As one of the coders begins to read the story out loud, Maeve stops him as he is about to tell her what will happen when she arrives at the train station, claiming that she is in control. Although the viewers never hear what the code predicted she would do, the incident inspires doubt that Maeve is truly making her own decision when she gets off the train in order to find her daughter. In addition, Ford spends the latter part of season one making ambiguous plans for a ‘new storyline’ for the park, as well as completing major renovations of the park’s landscape. Dolores’ murder of Ford at the climax of his speech in the finale, just as his board members are stealing information on how to create the hosts and planning to push him into retirement, creates a perfect storm that makes it almost impossible to argue that Dolores acted of her own free will, rather than a program implemented by Ford. Finally, Ford’s new storyline was called “Journey Into Night,” which is also the title of the first episode of season two. All of this seems to indicate that all of the hosts are still carrying out pre-programmed instructions from Ford rather than acting of their own free will. However, viewers will likely not get confirmation one way or the other on this point until late in season two, if even this season.

Episode two of the second season of Westworld will air on Sunday, April 29 on HBO at 9 p.m. PST.