This Tuesday saw the Orchestra and Bands’ first concert of the year, and what a way to start it off.

M-A’s music program, led by director Kent Kurrus, performed sixteen pieces at the concert, from Blue Swede’s “Hooked on a Feeling” to Stravinsky’s “Danse Infernale.” Kurrus said, “I’m eclectic with my programming. I try to pick and choose between a wide variety of things so that the program is very interesting.”

Students actually learned many more charts than they performed. Jazz Band III, for example, learned sixteen charts that Kurrus eventually pared down to five. Kurrus said, “It’s a way to get them slapped into shape. We read a lot, and we prepare a lot of charts. I hold the bar high and I expect them to reach it. And you know what? It worked.” 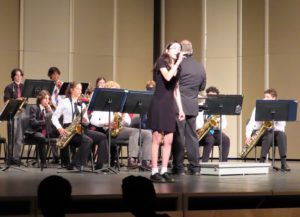 Jazz Band II with vocalist Kealy Bryman perform “But Not For Me,” a jazz song composed by George Gershwin in 1930 for the musical Girl Crazy.

The concert opened with Jazz Band II’s “Blues in Hoss Flat,” “It’s Only a Paper Moon,” “But Not for Me,” and “Fiesta Latina.” Freshman Kealy Bryman, the vocalist for “But Not For Me,” said, “I really like the piece that I got to sing. I just like the way the music sounds.”

Bryman, although a freshman, is not new to the stage. She said, “I’ve been singing since I was super little. I’m just surrounded by music all the time. My mom and my grandpa are in a trio together called the Dave Miller Trio. He’s the pianist and she’s the vocalist.” I’m not too experienced with jazz music in general, but Jazz Band II’s performance was enchanting regardless. 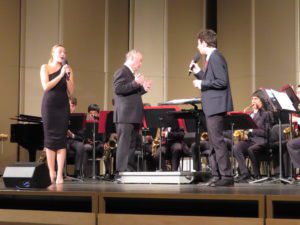 Next was Jazz Band III, which performed “Cambios de Otono,” “Ain’t That A Kick in the Head,” “Unforgettable,” “I’ve Got You Under My Skin,” and “Tall Cotton.” Senior Evan Wong, the lead tenor saxophone, said, “My favorite piece we played has got to be ‘Tall Cotton.’ It had a saxophone Soli, which is when all the saxophones play the same thing for a solid 60 measures without much accompaniment. It’s a lot of complex rhythms for a long period of time. It’s difficult, and I enjoyed it a lot.”

Sophomore Silvana Schmidt, a member of Concert Band, said her favorite song by other bands was “Unforgettable” performed by Jazz Band III, a duet by seniors Ryann Barnes and Jackson Bryman. Schmidt said, “I thought their duet was really beautiful.” 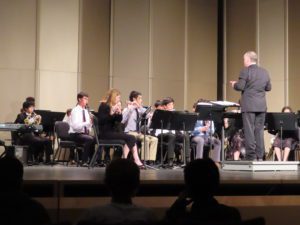 Concert Band perform “On a Hymnsong of Phillip Bliss,” by David Holsinger.

Concert Band, which performed “Invicta,” “On a Hymnsong of Phillip Bliss,” and “Hooked on a Feeling,” began after a ten minute intermission. Schmidt, who’s played the clarinet since fifth grade, said, “I liked our pep band piece, ‘Hooked on a Feeling,’ because it was more upbeat and interesting to play. We always play it at football games, so it’s really familiar.” You can see M-A’s pep band—composed of Concert and Jazz Band musicians—play at almost every M-A football home game.

Finally, in the best possible conclusion to the night, Orchestra took the stage and carried the audience through “Wilderness,” highlights from the musical “Wicked,” and three movements from The Firebird suite: “Danse Infernale,” “Berceuse,” and “Finale.”

Senior Mia Garcia, the concertmaster, said, “I really like the piece ‘Wilderness.’ It sounds very nice. But we’re also playing a really beautiful piece called ‘Danse Infernale,’ though the easier arranged version because it’s still the start of the year.” 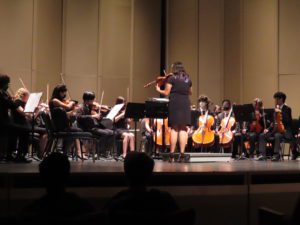 Concertmaster Mia Garcia and the Orchestra tune to A.

Garcia’s favorite piece the orchestra’s ever played is “New World Symphony” by Antonín Dvořák, from her freshman year. She said, “It’s so magical to me, I don’t know how to describe it. You just feel powerful when you play it.” I felt much the same way listening to Orchestra play their pieces.

The audience agreed. One audience member put it succinctly: “It was hard to believe it was high school.”

Administrative Vice-Principal Nick Muys, who attended the concert, agreed. “We’re really blessed here to have so many students who want to play music, and who come to us with so much talent. It’s great that we have a program that really pushes them to learn new pieces and be exposed to a repertoire that will hopefully become part of their musical education.” 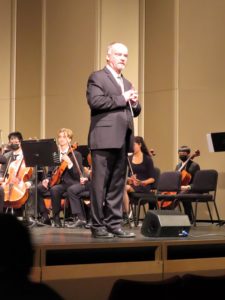 Director Kent Kurrus introduces the three movements of The Firebird suite. After the concert, Nick Muys said about the piece, “I think it was an incredibly bold choice for a first event like Kurrus said when he first introduced it. It pushes a lot of musical boundaries for our young players and experienced players alike.”

For Kurrus, though, the most important thing is his students. “If the students are not enjoying themselves playing the song, then I’m not doing my job.” When the students get joy from playing, Kurrus said, “that’s the best affirmation I could get.”

For many students, M-A’s music program is a community. Senior Anjali Sujithan said, “Because we’re spending so much time with each other, it definitely feels like a family.”

Garcia agrees: “You’re with these people for, what, four years? So you become really connected to them because you get to see them every year. It really is a great community.” Garcia’s statement was supported in live time, as we were interrupted three times during our four-minute interview by other members just saying “Hi.”

I caught Kurrus as he was packing up at the end of the night after the concert. He said, “I’m totally over the top, especially so early in the year. I think things are in a good place, and what’s even better is that I feel the vibe from the kids, and they’re happy with where things are at, which matters more than what I think.”

Orchestra will play at the Festival of Gold in Nashville, Tennessee in March. Garcia said, “Nashville is the hub of music and I’m pretty excited about it.” Concert Band and Jazz Band are expected to play in the Anaheim Heritage Festival in the spring.

The next time the whole music program plays together is in November, for their Winter concert. Kurrus said, “This is a treasure and almost no one knows about it at M-A. A ton of students are in classes with these kids and don’t even know that they’re in a group.” Seats are free, so clear your schedule for November 29th to catch these talented students live.