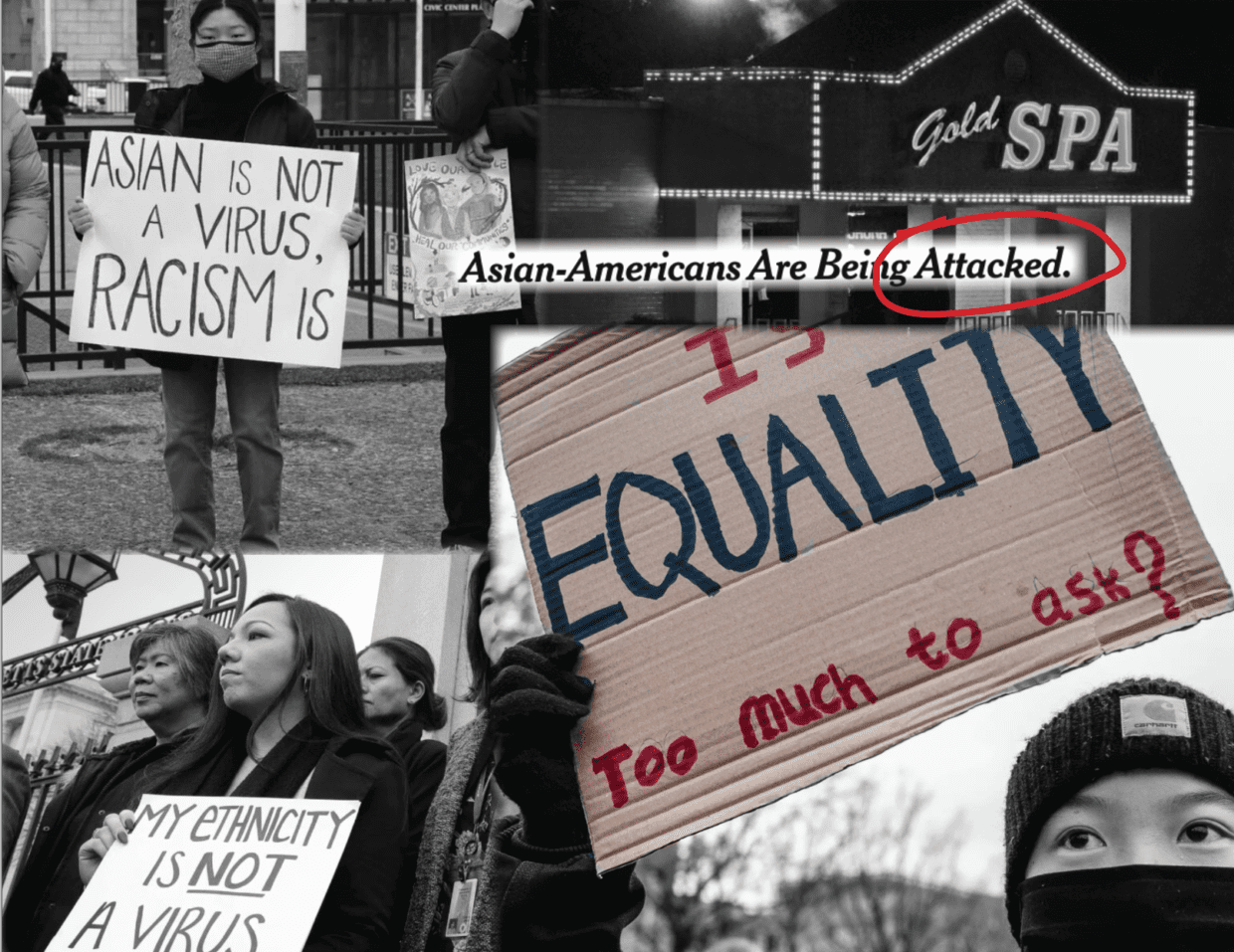 Hate is a Virus: How COVID-19 has Exacerbated Violence Against Asian Americans

The recent violence targeting Asian Americans has struck fear, anger, and anxiety in many Asian communities throughout the country.

This week, eight people were killed in Atlanta, Georgia. Six of them were Asian women.

Since the start of the COVID-19 pandemic, the violence towards Asian Americans has escalated, as hate crimes targeting Asian Americans have increased by 150%. Often referring to the COVID-19 virus as the “Wuhan virus” and “kung flu,” former President Trump’s rhetoric further encouraged anti-Asian racism. As the virus spreads, so have the narratives of xenophobia and intolerance with many of the violent incidents concentrated in the Bay Area. Now, the discrimination that many Asian Americans face is in the spotlight of a national discussion.

“I feel incredibly torn that Asian communities have a target on their backs because of stereotypes, and especially due to unforeseen and unjustified hate as a result of the virus, or possibly due to the previous president’s hatred towards the Chinese because they supposedly ‘started the virus.’”

In response to the recent killings in Atlanta, sophomore Nadia Ruiz expressed, “With what’s been going on, I feel very unsafe going out. I worry that if I’m in public, someone will start shouting racial slurs at me because it’s so common now. When I read articles about Asian hate crimes, it makes me feel like I could be next. I also worry about my family, and if they’re unsafe. I worry if my grandparents are no longer safe because of the recent crimes against Asian elders.”

Similarly, senior Ben Sakamoto worries for his family during this time. “Coming from a Japanese background on my dad’s side, I am always joyful and happy whenever I get to see my Japanese relatives because they are always so welcoming and full of life. For these recent events to occur, it’s heart-crushing, to say the least. The recent events are just devastating to the Asian community, and friends of mine.”

“There has been an overwhelming amount of Asian-bias in this country for several years and the stereotype of the pandemic was just the tipping point, which equates to the extreme uprise in Asian hate crimes,” Sakamoto stated.

Verbal harassment (68.1%) and shunning (20.5%) (i.e., the deliberate avoidance of Asian Americans) make up the two largest proportions of the total incidents reported.

Senior Aurelia Gemmet-Young conveyed that she felt “nausea and disbelief” when she first heard about the hate crime in Atlanta. “My first reaction is to want to curl up in a little ball and hide away. Then, I felt a sort of deep resigned frustration. I feel like a lot of Asian American struggles against racism are disregarded because we’re supposedly ‘prosperous’ and because we’re not always so obviously and violently mistreated.”

In fact, many Asian Americans struggle with the label as the “model minority” for stereotypically doing well in academic settings and pursuing high-paying occupations. This has been used to pit minority groups against each other and often leads to the invalidation of these experiences as a person of color (POC) because of their image as a successful or privileged person.

Gemmet-Young shared, “I’ve always felt invalidated for my struggles because the Asian community stereotypically does well in school and has decent-paying professions. As I said, we’re not so obviously discriminated against as other minorities so we often go unheard and unlistened to.”

“I think that’s what most Asian Americans struggle with; they don’t want to tell people about some racist experience they had because they think no one will care. Racism against Asians wasn’t brought up as often before the pandemic, so people didn’t normalize talking about it,” Ruiz said. She continued, “It’s horrible, and what angers me is that some people lack empathy and think it’s okay to do these kinds of things. I am grateful that many more Asian Americans are speaking up about the harassment they’ve faced because it’s very comforting, it’s just sad that it’s so common, even before the pandemic. I just think that more people need to realize that the Asian community could use some help and support.”

“I’m tired of no one taking us seriously, I’m tired of the tiny imperialist voice in my head telling me that my struggles aren’t as bad as other communities so it shouldn’t matter. I’m tired of being pitted against other minorities and painted as “other” before I’m recognized as American, especially when I know for a fact that my family has been right here in the Bay Area longer than the majority of my white “American” peers. I’m tired of the burnout from the constant outrage, and I’m deeply, deeply sick of the racism and xenophobia in this country.

Ruiz expressed that the best way to help Asian communities is to “educate people. They need to know why this is important.” “Also, support Asian-owned companies, donate, or even just check in on friends and family to see if they feel safe. Show them that they have your support and be willing to listen and learn about their experiences,” Ruiz further explained.

Gemmet-Young concluded, “Be aware of what’s happening and take action when you can. Listen to your Asian American and Pacific Islander (AAPI) peers, friends, mentors, and so on. Recognize the insidious ways we are discriminated against and fight against it when you can. Amplify our voices and validate our struggles. Stand in solidarity no matter what race or ethnicity you belong to, because these attacks are a result of division and fear. Do not allow racists and terrorists to divide us, we are stronger together.”