It’s only fitting to watch some spooky horror movies in anticipation of Halloween. If you want some spine-chilling films, this is the list for you! These movies have everything from suspense to jumpscares, and even some gore. Only watch these movies if you’re okay with not sleeping tonight as they are truly frightening. Keep in mind that all the films on this list are rated R, viewer discretion is advised. 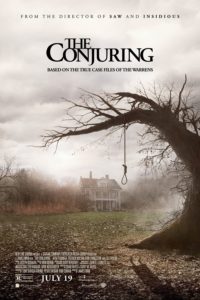 The Conjuring is a modern classic that kickstarted a whole horror movie cinematic universe centered around the true stories Ed and Lorianne Warren, who were paranormal investigators, were hired to look into. The knowledge that this story is based on true events makes it all the more eerie and unsettling. The film follows a family who moves into a new home, only to be met by an evil and unwanted guest. This movie is rather slow-paced, but the sudden jump scares and perfectly built-up tension make up for it. This is a Halloween must-watch. Midsommar follows a couple who travels to a secluded village in Sweden. Things quickly escalate as they find themselves in the midst of a centuries old ritual. Ari Aster is a brilliant director who puts you in the perspective of his characters and makes you feel their confusion, grief, and anger. The lighting of this film deviates from the typical horror 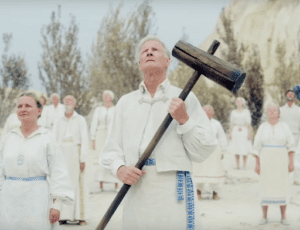 films, as it is constantly bright and blinding, a huge contrast to the dark and cool tones of usual horror. The bright white commonly seen on screen serves to unnerve the audience instead of soothe them. The serene setting of the film further masks the underlying horror, making this a visually unique and genius horror film.

Cabin in the Woods Cabin in the Woods is an excellent comedy-horror that pokes fun at traditional horror tropes. It follows a group of teenagers that appear to embody typical horror characters– the fool, the athlete, the scholar, the final girl (survivor), and the promiscuous. They vacation at a desolate cabin in the woods, where they face a horrific family of zombies and other monsters. This movie strays from normal slasher films because their situation is actually being carefully formulated by scientists. This is a bizarre setup for a horror movie and gives us a new perspective on the characters because they are coerced unknowingly into making their decisions. The strict way the characters are pushed into their supposed “roles” and stripped of their other character traits serves as an interesting, and hilarious, commentary on today’s slasher film tropes.

Director Ari Aster strikes again with Hereditary. In this film, strange events are inflicted on a family after the death of their grandmother. The acting in this film is excellent and perfects the movie’s unsettling atmosphere. Watching the characters’ different ways of coping with grief in the wake of their grandma’s death draws the audience into their situation. Toni Collete, who plays the mother, delivers an especially amazing performance as we watch her descent into grief and madness. 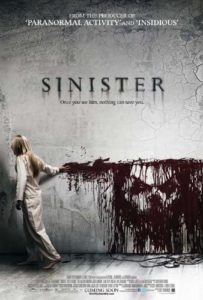 Sinister centers around a family who recently moved into a house with a dark past; the previous family to live there was brutally murdered. Ethan Hawke plays the lead, a struggling writer desperate to find writing inspiration from the grueling murder and mystery shrouding the house. This film builds an increasingly creepy and hopeless mood through dark lighting and an eerie soundtrack. Viewers feel a mounting sense of dread as the mystery behind the deaths unravels, and the ending is unexpected and unsettling.

These movies are the perfect watch for Halloween. They tie in suspense, jumpscares, and gore, creating amazing scary movies. Halloween is coming up fast, so embody the Halloween spirit and put one of these movies on!