The last week of girls volleyball preseason play was challenging for M-A. The week kicked off for the Bears with a tough match versus Valley Christian, and while they ended up losing, the Bears played with amazing energy and proved that they are fired up for league play, which begins next week.

The starting lineup included freshman middle blocker Marit Hoyem, senior right-side hitter Eliza Grover, and senior libero Chloe Johnson. The Bears struggled in the first set but kept the score close through the first 12 points with the help of three consecutive service errors by Valley Christian. At a score of 12-15 favoring the Warriors, M-A was uncharacteristically called out of rotation, and Valley Christian went on to win the set 15-25.

After set one, senior Kiana Sales switched to the libero position and the Bears rallied around hard-working defense and fierce offense. Grover fired with a kill to open set two and the Bears won after an impressive five-serve streak by senior outside hitter Jacqueline DiSanto.

Grover jumps up to attack.

M-A achieved a victory in set three, but fell to Valley Christian in set four. The Bears displayed tremendous heart in the final set and kept the score within two points, Grover notably serving up an ace when the score was tied 4-4, but in the end M-A lost the fifth set 13-15.

Head coach Fletcher Anderson said, “We did a great job serving I thought. Eliza Grover and Lauren Heller had great games tonight, but many of the girls were feeling sick and it showed; we had very little energy.”

M-A may have lost this preseason match, but league play kicks off next week with matches against Half Moon Bay and Aragon! Come watch as the players defend their Northern California championship title in a match versus Aragon at 6 p.m. in Ayers gym next Thursday, September 15. 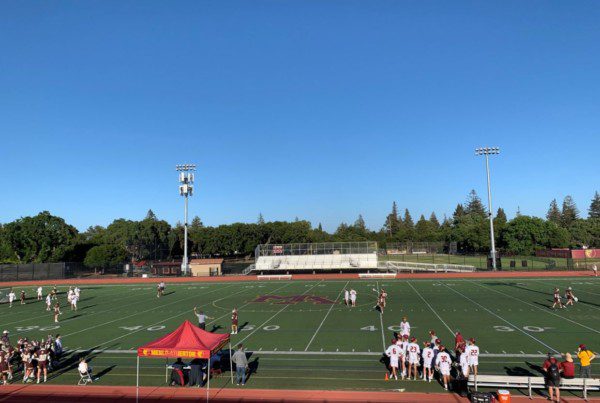