After a victory over Aragon last Thursday, the M-A girls varsity volleyball team went undefeated in Saturday’s Menlo Invitational tournament and was victorious yet again on Tuesday, September 20 in an intense match versus rival Carlmont.

Assistant coach Lauryn Anderson explained, “We felt great after winning the Menlo tournament. We’ve been playing pretty smooth and we’ve been executing the things we’ve been working on fairly consistently. Our focuses the past week have been siding out and our out-of-system offense which I think helped us today.” 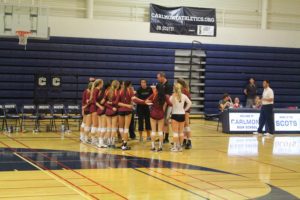 In set one, the Bears put up a solid block and attacked successfully against Carlmont’s defense. When the Bears led 10-6, Carlmont took a timeout in an attempt to gain control of the game, but when play resumed senior Kiana Sales went on a massive serving streak. The Bears eventually won the set 25-13 with several kills from sophomore Alicia Letvin, DiSanto, and senior right-side hitter Eliza Grover. 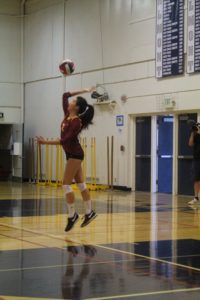 Set two was painfully close. The Carlmont players led off with a kill and increased their lead to 5-1, but the Bears came back with a block by Grover and freshman Marit Hoyem and caught up to the Scots.

When the teams were tied 7-7, Sales fired with a crucial service ace that put the Bears ahead of their rivals. DiSanto followed up with a tricky roll shot right over Carlmont’s block, which kept M-A in the lead until the Scots pushed ahead 12-10 with powerful attacks. Grover contributed a kill on a difficult “slide” set to bring the score to 21-23, but Carlmont fought back and won the second set 25-21. 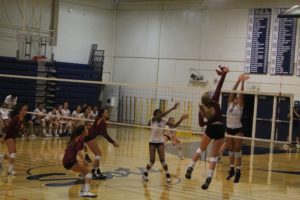 Eliza Grover attacks from the right side.

Following this loss in set two, the Bears came back and competed relentlessly to pull out a win in set three, despite a tough Carlmont offense. M-A moved on to set four with the chance to take the match.

M-A carved out an early lead in the fourth set, scoring three consecutive points before Carlmont was on the board. The Bears showed their determination to end the match with countless smart plays, including an impressive setter dump by Knapp, right over Carlmont’s block. When the score was 9-6 favoring M-A, F. Anderson subbed senior Elise Carlomagno in to serve, and she responded with an ace. 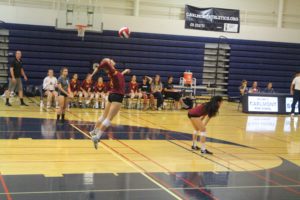 Elise Carlomagno leaps into her serve.

This ace prompted the Scots to take a timeout, but M-A came back strong, and Grover showed off her athleticism with another kill off a slide. L. Anderson added, “Eliza Grover has been a rock for us this season and she produced another awesome match tonight. Both of our setters also ran great offenses, especially given our passing struggle tonight.” 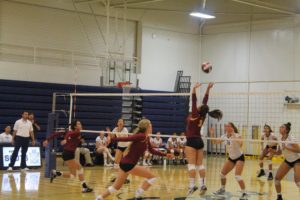 DiSanto contributed a well-placed kill out of the back row to bring the Bears ahead 22-20, and she continued serving, eventually acing Carlmont to give the Bears game point. M-A won the exciting match 25-21 in set four when the Scots sent the ball out of bounds!

Said L. Anderson, “This team consistently gives us reasons to believe in them and be impressed by their work ethic and determination. Our main focus is always serving and passing, as it will continue to be for the rest of the season.” 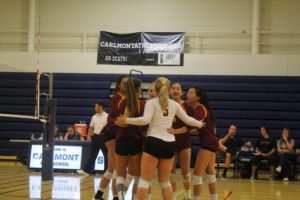