With one minute of overtime left, the Bears were tied with the Tigers, 42 points each. Tuesday night marked the end of the Girls Varsity Basketball season after narrowly losing 43-46 to Lick-Wilmerding during the first round of CIF Norcal Playoffs in a game that was neck and neck until the very end (and then some) as the game went into four minutes of overtime.

Dominance of the court shifted throughout the game, with the Bears starting out strong, falling behind around the third quarter, and then picking it up again in the fourth. With 10 seconds left on the clock, junior Malia Latu sunk a basket to tie the score, bringing the game into overtime. During overtime, tensions ran high as each team played to secure a spot in the next round of playoffs. Due to fouls, both teams had multiple free throws in the final minutes, and seconds, of the game. “The game was super high energy and intense,” said spectator junior Stella Kaval. 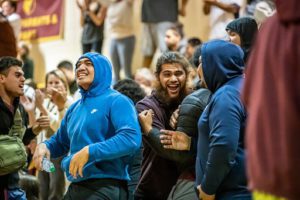 The crowd cheers after a basket for the Bears.

“It’s been tremendous. It’s been an awesome run. We won CCS Champions for the first time 27 years or so, so I couldn’t ask for anything better,” said first-year coach Steve Yob about the season as a whole. Girls Varsity Basketball one CCS Championships on Saturday in a game against Palo Alto High School. “I told the girls, even though we lost, it was still one of our best games. I’m so proud of the girls,” continued Yob. 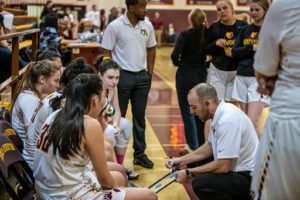 “Overall I think we did pretty well as a team. We got closer as a team, both on and off the court. We grew to play well with each other,” said senior Mariah Dunlap.

“I’m pretty proud of how the season ended. I just couldn’t ask for a better team,” said Latu.