After a 51-44 victory over rival Carlmont in the CCS division 1 semifinals, the Bears finished runners up to Silvers Creek, losing 42-30. The Bears ended their season with an overall record of 21-9 and 11-1 in Peninsula Athletic League (PAL) play.

The Bears got off to a slow start in the first quarter with the Raiders starting the game on an 8-2 run. The Bears struggled to get into an offensive rhythm, only mustering four points the whole quarter, all from senior Greer Hoyem. The first quarter ended with the Bears down 10-4. 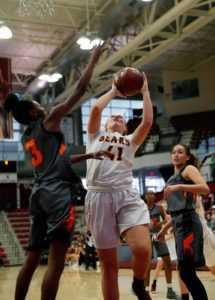 Hoyem goes up strong for a layup.

After going down double digits to start the second quarter, the Bears were able to battle back in in the latter half of the period with Hoyem’s field goal sparking an 8-0 run to get within 4. During this run, senior Carly McLanahan hit a three pointer and freshman Catherine Chai made a shot and a free throw. The game remained within reach at halftime with the Raiders leading 18-13.

The Bears found new life coming out of the locker room with Hoyem continuing her dominance in the paint and the Bears creating turnovers on the defensive end of the court. The Bears held the Raiders to 5 points the whole quarter and cut the lead to just two after Hoyem’s score. Hoyem had an outstanding performance with an incredible 19 points. The Bears ended the quarter down by two 23-21 ending into the final 8 minutes of play. 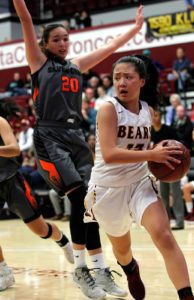 Chai drives to the basket.

The Bears comeback fell short with the dynamic duo of sisters Aniyah and Leilani Augmon combining for 17 of the 19 points the Raiders scored in the final quarter. However, Hoyem wouldn’t let her team go down without a fight, keeping them within striking distance. Nonetheless, the amazing play and free throw shooting of the Augmon sisters saw the Raiders pull away late defeating the Bears 42-30.

Even though the Bears lost, their season continues with a first round matchup against Montgomery High School in the CIF NorCal Girls basketball championships. Come out and cheer them on as they look to advance to the second round on Wednesday night.