Last Friday, the M-A Bears beat Sequoia by a landslide of 63-32. This was the second time both sides faced each other in the past two weeks and the Bears held nothing back as they defeated the Cherokees for the second time straight.

The Bears got off to a fast 8-2 start which was due to their noticeable size advantage. Junior Greer Hoyem and senior Ofa Silli grabbed several early key boards that allowed the Bears to get easy second chance opportunities. 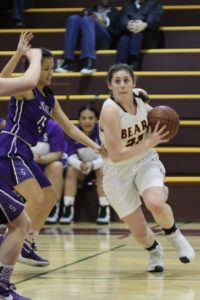 After leading 18-11 at the end of the first quarter, the Bears lost a bit of momentum as

Sequoia caused the Bears to commit a few turnovers. Even with a 29-18 lead at the half, Coach Markisha Coleman wasn’t extremely pleased with her squad’s performance.

Coleman reflected, “Our team allowed [Sequoia] to drive on us a lot, so that is something we talked about at halftime.”

The Bears came out hot in the second half with several threes by junior Carly McLanahan and several big offensive boards by Hoyem.

In the third quarter, M-A allowed only three points, while scoring 24 points of its own. The fourth quarter was slow, with little scoring from either side.

With Coleman’s strong demand of a great performance from her players, she was still happy with the win but felt that her players are going to need to play better in the weeks leading up to playoffs. She stated, “I think we could have played better, but when you win by 30 it is hard to critique them.” 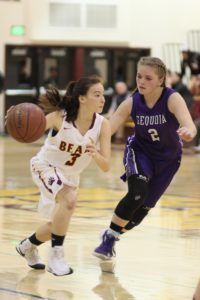 Coleman, similar to most coaches, doesn’t like looking too far into the future when it comes to her team. “We still have to focus on the rest of the league. There are still teams that we haven’t played such as Hillsdale and they only have one loss. Our focus is on league and once we get done with league we will prepare for the PAL tournament and CCS.”

Senior Megan Sparrow and juniors Mclanahan and Hoyem dominated throughout the game. Sparrow had an incredible 19 point performance, taking the ball to the rim at will. Mclanahan led all scorers with 20 points, including five threes, in a red-hot performance as well.

The Bears’ next game is at Carlmont on Wednesday. Good luck to the players as they close out the regular season!