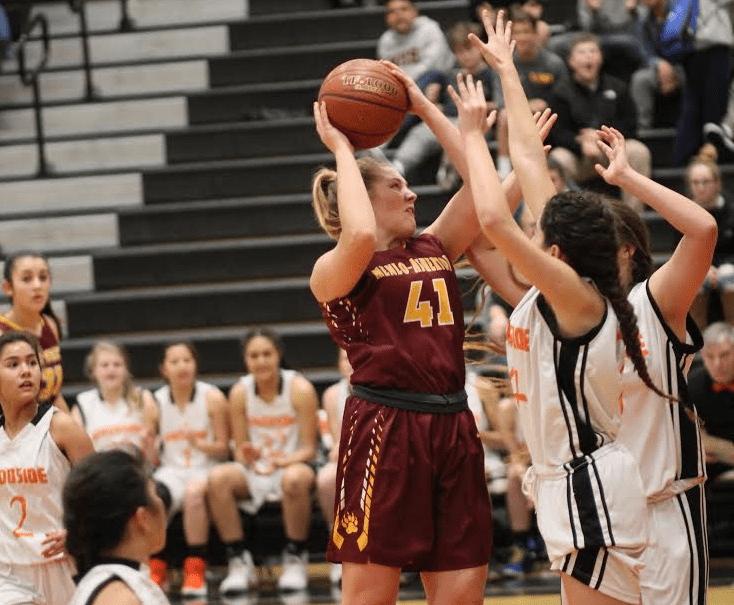 The girls basketball team struggled early and often Friday night, but Coach Markisha Coleman rallied her players and led them to a 51-31 victory.

Woodside got off to a quick start as senior Leandra Quijano hit three big three-pointers to give the Wildcats a comfortable 17-6 lead. Junior Carly McLanahan struggled from beyond the arc and the Bears were also hurt by a couple of key traveling calls in the first quarter.

The Bears huddle and discuss their game plan before the game. Credit: Lara Hoyem.

The Bears seemed to gain some momentum as senior Megan Sparrow scored five straight points to cut into Woodside’s lead and even hit a 3-pointer at the buzzer to end the second quarter. The Bears led by only a point at the half, but that was because Woodside was 5-5 from beyond the arc.

In the third quarter, M-A’s star junior, Greer Hoyem, took over. Her 14 points in the game and the Bears’ full-court press held Woodside to just five points in the second half alone.

The Bears did this all without the Kailahi sisters who were missing from the contest. In a strange moment in the third quarter, Woodside coach Ron Rossi realized that the teams had been playing with a men’s ball during the early stages of the second half.

After the game, Coleman spoke about her team’s performance: “[Woodside] came out hitting a lot of good shots and beating our defense. I think we then settled down and went back to what we were comfortable with. We started out in a 2-2-1 [zone] and then quickly switched to a full-court press. The press helped us a lot. Greer Hoyem did a great job on the inside and I think our guards hit some good shots as well. They sent two or three people at Greer, so the shots our guards made were very important.”

Nonetheless, the Bears still finished the night strong and kept their 16-game win streak alive. The Bears continue their league play in a match-up with Capuchino on Wednesday, January 25 at M-A. Go out and support the Bears as they look to build on this incredible run.