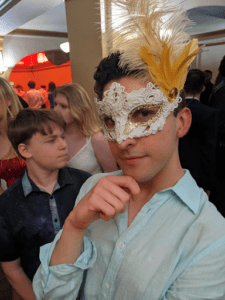 Last Saturday was M-A’s annual Homecoming Dance. Following our victory against the Menlo Knights on Friday night, Bears of all grades and their friends filed into the historic Fox Theatre in Redwood City. This year’s theme was “Midnight Masquerade,” and the numerous fanciful masks added a touch of flair and extravagance to the dance floor.

From eight till eleven pm, Fox Theatre’s acoustics amplified the booming beats and kept the dance floor packed with M-A students singing and dancing all night long. But, the DJ’s song choices prompted mixed opinions from students. Junior Jeeya Parekh said, “The music could’ve been better,” while sophomore Emmett Hoffman responded, “I didn’t really like the songs at the beginning, but towards the end, they were great! My favorite song was ‘Superbass’ by Nicki Minaj.” 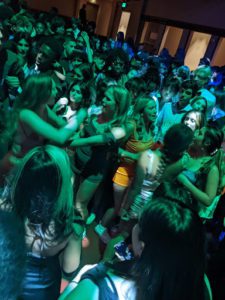 In one of the bigger upsets of the night, Ed Sheeran did not feature in the queue of slow-dance songs. In fact, only two slow-dance songs played at all (one being “Don’t Stop Believin’” by Journey, which is arguably not a slow-dance song).

Leadership worked fervently to allow the dance to take place. Senior Class Advisor Annika Kaval said, “My co-advisor Jocey Lunt and I combined efforts for this year’s Homecoming. It’s been a lot of work organizing with Fox Theatre.” 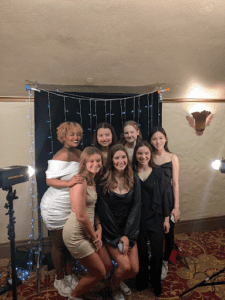 The dance did have a few disappointing qualities. Tickets were $30 more expensive than last year. Kaval explained, “The higher prices are because we are going off campus, and the Fox Theatre is a very expensive venue.” And unfortunately, the historic building prohibits food and drink except for water. But even water became somewhat inaccessible due to the limited number of paper cups.

The 93-year-old theatre was very elaborate. Red lights illuminated the grand entry hall, and students took in Leadership’s masquerade-themed decorating while checking in.

Volunteers ran a coat and accessories storage system on the top floor so students could be unburdened with their belongings while dancing, and there was a small photo booth for couple and group photos.

The theatre’s bottom floor seating had been rearranged to open room for a dance floor. Students squeezed into every inch of available space, often cramped back to back. Senior Naomi Stamler said, “Dancing was like getting trampled, but in a fun way.” Hoffman added, “And so many people made the room crazy hot.” 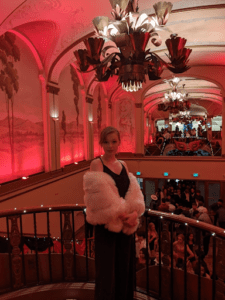 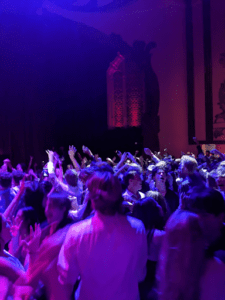 Students singing and dancing to the final song of the night, “Don’t Stop Believin’.” 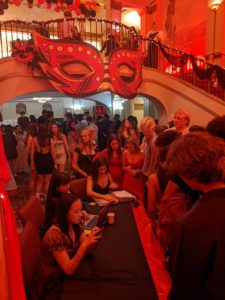 Erin Young and other Leadership members working the check-in table.

Devon Schindler is a senior at M-A and in his first year of journalism. He enjoys analytical writing about local politics and social justice. He spends most of his time rowing for Norcal Crew and playing D&D on the weekend.