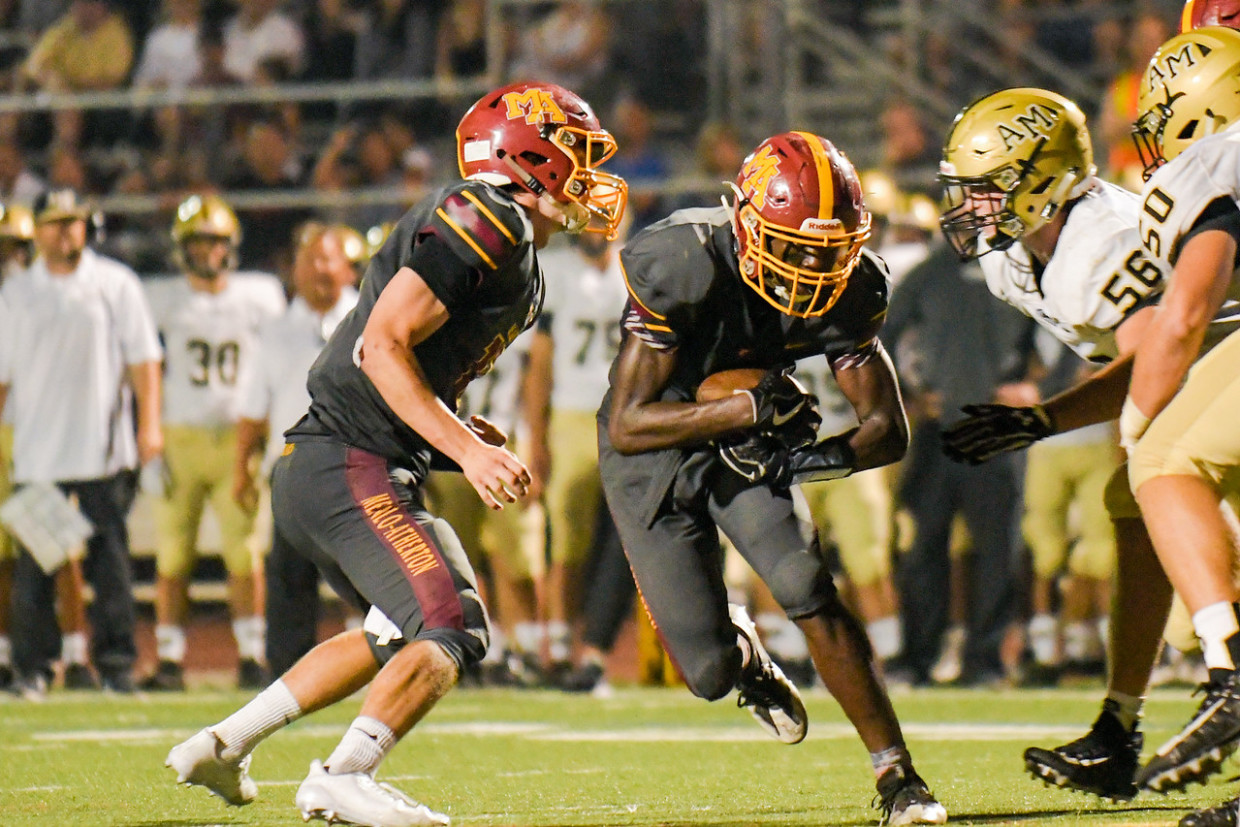 After the M-A Varsity football team lost their home opener to Bellarmine 21-16, the Bears lost their second straight game to Archbishop Mitty 30-23 on Friday night. The Bears fell to 0-2 on the season and are looking to rebound from two straight losses at home on the road at Palma High School. 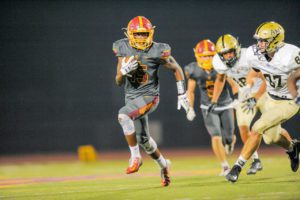 Senior Nick Anderson looks to slips through the defense after completion near midfield. Credit: Bob Dahlberg.

The Bears went down 9-0 early in the first quarter after a quick touchdown and field goal by Mitty. The Bears got a field goal of their own to make the score 9-3 in favor of the Monarchs. The score remained the same at the end of the first quarter with both defenses holding up strong after the early scores. 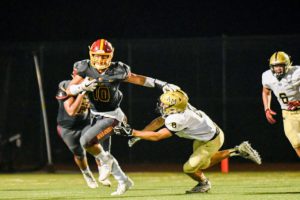 Senior transfer Kilifi Leaaetoa breaks a tackle and on his way to a huge gain. Credit: Bob Dahlberg.

The second quarter started similar to the first. Mitty scored a touchdown to extend their lead to 16-3. Unlike the first quarter, the Bears responded with a touchdown of their own after senior quarterback Miles Conrad threw a deep pass to freshman when wide receiver Troy Franklin who caught it and ran it into the end zone to bring the Bears back within seven after the missed extra point. Franklin finished the game with five receptions for 88 yards and one touchdown. After a quick stop by the Bears, M-A got the ball back and marched down the field led by some outstanding running from senior running back Kilifi Leaaetoa, who had ten carries for an impressive 114 yards. Inside the red zone, Conrad found senior Spencer Corona open in the end zone for another touchdown to bring the Bears level with Mitty at 16 a piece. The score would remain level going into halftime. 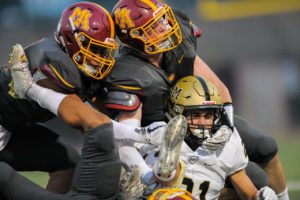 The Bears had a rough time getting anything going in the third quarter. Mitty pounced on the Bears early to extend their lead to 23-16 and played some outstanding defense to keep the Bears scoreless throughout the entire third quarter. After the early touchdown by Mitty, the Bears defense also held strong to keep Mitty off the scoresheet for the rest of the quarter and more importantly keep the Bears within striking distance. The defense was lead by Juniors Daniel Heimuli and Noa Ngalu who had ten and seven tackles respectively. 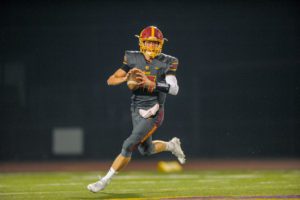 Mitty started with the ball in the fourth quarter and marched down the field with impressive running, warring down on the Bears defense. Finally, Mitty’s running back got loose on the outside and scored to make it a two touchdown deficit for the Bears. But the Bears were not done yet. Conrad marched the Bears down the field with impressive throws to Corona. Inside the ten yard line, Conrad faked the handoff and took off into the end zone to trim the deficit to just seven. Conrad had 19 completions for 293 yards and two passing touchdowns plus one rushing touchdown as well. After a quick stop by the Bears, Conrad again led the Bears down the field and had the ball inside the opponent’s five yard line with a couple minutes left on the clock. But a bad snap and miscommunication led to a fumble by the Bears and a fumble recovery by the Mitty defense. The final score was 30-23 in favor of the Monarchs.

The Bears look to bounce back from the tough loss on the road against Palma High School next Friday at 7:30 p.m.