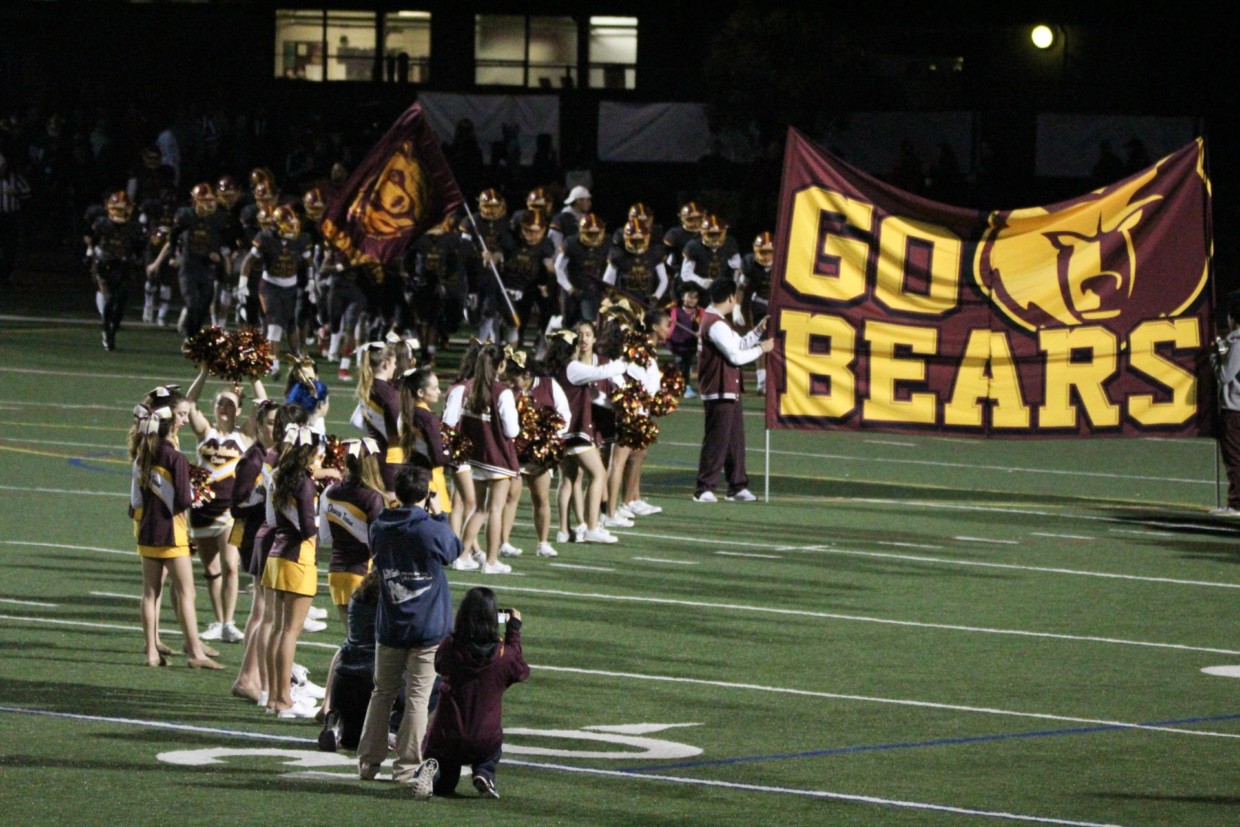 In the CIF State Division 3-AA Semifinals, the Bears played outstanding football to beat Manteca in dominating fashion, 49-21. The Bears will be playing Southern California team Paraclete (11-4, 3-1 in league), a team that just won its semifinal game against SoCal powerhouse Mater Dei by a score of 34-18, for the state championship. The championship will be played next Saturday, December 17, in Lancaster, just North of Los Angeles. 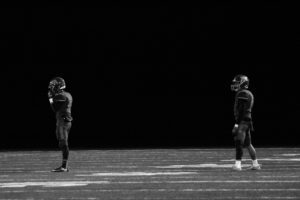 Two of the Bears’ special team players line up for the kickoff.

The game started off with great defense from both teams. Late in the first quarter, the Bears drove down the field and star running back Jordan Mims ran the ball into the end zone from 13 yards out to take the lead 7-0. Manteca bounced right back with a 56-yard touchdown to tie the game at 7. With a minute left in the first quarter, the Bears were carving up the Buffs’ defense and Mims broke away from the defense to score another rushing touchdown, this one from 31 yards. The first quarter ended with the Bears up 14-7. 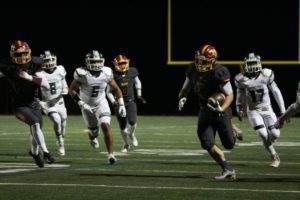 Stavro Papadakis takes the ball into the endzone.

The Bears started the second quarter where they left off in the first, with another rushing touchdown, but this one from Stavro Papadakis to extend the Bears’ lead to 21-7. Late in the second quarter, Manteca was looking to score, but junior Spencer Corona intercepted quarterback Gino Campiotti, ending the half with the Bears leading 21-7. Corona, who had been injured the week prior, said, “Last Thursday during practice I tweaked my knee and I wasn’t able to practice all week. My decision to play was last minute and it paid off. I had the full support of Coach Adhir and the rest of the coaching staff.” Corona — who plays wide receiver, cornerback, and kicker — made a lasting impact in the game for the Bears. 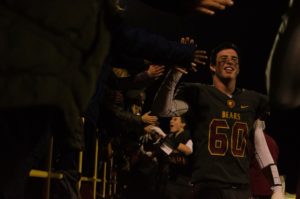 The Bears celebrate with the fans after the game.

On just the second play of the second half, quarterback Aajon Johnson ran the read-option perfectly, faking out the defense and running 55 yards for a touchdown to make it 28-7, after the extra point made by Corona. Johnson then had another touchdown on a short run and converted the two-point conversion with a short pass to his twin brother Aaron, making the score 35-7, after another extra point. Manteca attempted to mount a comeback, scoring before the end of the third quarter on a 35-yard passing touchdown. After the win, Aajon Johnson commented, “We just stuck to what our coaches told us all week. It all started with our [offensive] line, they did a great job keeping that [Manteca] defensive line under control.” 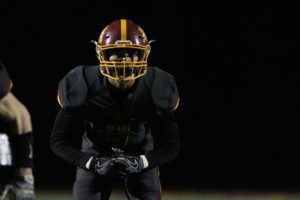 Early in the fourth quarter, Manteca scored on a 20-yard pass to make the score 35-21. Four minutes later, Mims broke a tackle, found a gap in the defense, and took the ball to the end zone for a huge 72-yard touchdown. To finally put the game out of reach for Manteca, the Bears intercepted a pass at the Manteca 25-yard line. Johnson then had a 22-yard run, and finally, Mims put the ball in the end zone on a 3-yard run for his fourth touchdown of the night. The star running back finished the night with 269 yards and four TDs. Mims told us after the game that M-A “seized the day.” 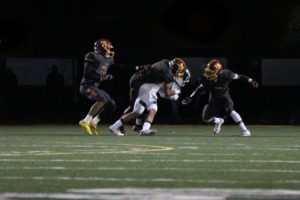 The Bears were outstanding on defense making tackles all night.

After a phenomenal season, the Bears will make a trip down to Southern California as they try to achieve something never before done in M-A football history. If you can, go support the Bears as they take on Paraclete at Antelope College in Lancaster.