*Editor’s note: This article was originally posted on InMenlo.com; used with permission.

Off the Grid is a gathering of food trucks which takes place in multiple locations in the San Francisco Bay Area, the closest being near the Menlo Park train station. Every Wednesday from 5 to 8 p.m., street food vendors provide numerous kinds of food to the public. A popular destination for families, friends, and date nights, the food trucks present a casual setting for live music and togetherness but have also been a subject of controversy since the proposal of the Off the Grid project two years ago.

In the words of Off the Grid employee Brian Malmstrom, Off the Grid is a “coming together place to meet people and unite around really good food.” Malmstrom has worked with Off the Grid for two years and describes his job as a way to “follow [his] passion, to travel, and to create connections to different communities.” 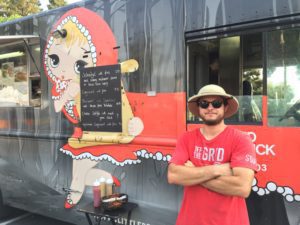 Malmstrom says Menlo Park is one of the most family-friendly locations he has worked at; children are free to “run around and spill things” without giving their parents cause to worry.

AT&T-sponsored games, such as beanbag tosses, have been a recent addition to Off the Grid’s Bay Area events, serving to entertain children and promote the company’s hiring campaign.

Jennifer, a longtime employee of Capelo’s Barbecue food truck, cited the personal significance of regular customers as one of the reasons she loves her job at Off the Grid. 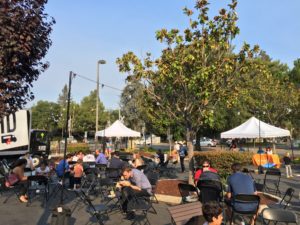 Photo by M-A Chronicle Staff Off the Grid attendees enjoy their food in the dining area.

This rose-colored view of the food trucks and their place in Menlo Park’s community sharply contrasts the opinion of many local business owners.

The food itself, while reviewed positively on Yelp and enjoyed by crowds of people every week, is certainly not on par with the standards of nearby restaurants. Food trucks are generally hailed as fusions of convenience and cuisine, rife with innovative chefs and inspiring recipes. However, the food truck business model of wholesaler-sourced ingredients, pared-down menus, and high pricing creates a profit disproportionate to the owner’s investment. While this is excellent from a business standpoint, establishments that provide artisanal foods should be concerned with the quality of their food before the quantity of their earnings. A local business owner described Off the Grid as an establishment which “takes the money and runs.”

Additionally, food trucks pay no property taxes and do not sponsor local activities such as Little League and AYSO. Popular restaurants that have been in Menlo Park for over 20 years contribute to the community by supporting local teams and organizations.

Counter to this, Taryn Thiele-Sardiña, a past intern of the National Food Truck Association, explained that food trucks “have less expendable capital to invest locally than brick-and-mortar restaurants” and are still important fixtures of the community. 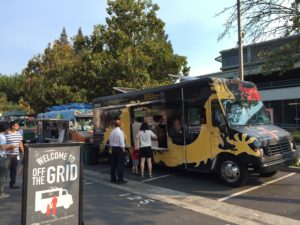 Photo by M-A Chronicle Staff Customers line up in front of the Seoul of Taipei food truck.

According to the Menlo Park City Council, Off the Grid is part of the plan to rejuvenate the downtown area. Other regular events such as Summerfest (formerly Connoisseur’s Marketplace) and the Fremont Park Concert Series illustrate attempts to accomplish this goal. However, many believe that such a revival should not be brought by an outside corporation; it should come from within, from local businesses which form the true spirit of downtown Menlo Park.