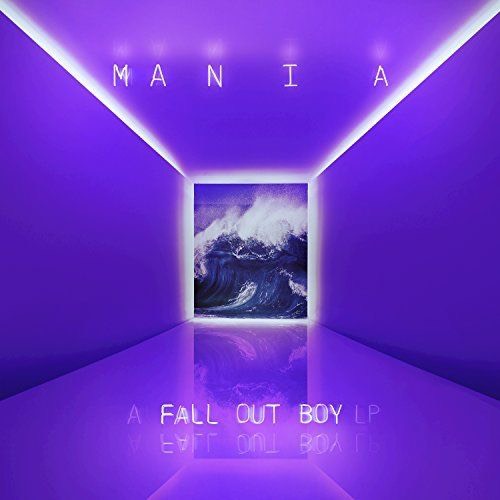 Famous pop-punk band Fall Out Boy is back and better with unique musical elements in their newest album Mania. After the long delay of the album and a successful U.S. tour, Mania dropped on January 19 on iTunes, Spotify and CD in stores.

Although the original date was set for September 15, 2017, half of the album’s songs were released: “Young and Menace,” “Champion,” “The Last Of The Real Ones,” “Hold Me Tight Or Don’t,” and “Wilson (Expensive Mistakes).”

With each album, Fall Out Boy has a recurring theme, which usually either consists of a blue color scheme or a red color scheme with the exception of “American Beauty/American Psycho” which featured a black color scheme. “Mania” has a purple theme with waves, symbolizing that the new album will incorporate styles new for fans while keeping in touch with their old school Chicago sound.

After their 2009 hiatus, the band started moving towards the mainstream by utilizing dubstep beats and other electro-pop sounds besides their four main instruments. “Young and Menace” was their first released single from their album. The song was the first to be released because it gives insight on the new album. It highlights soft guitar melody and quiet lyrics in the first minute as an ode to their older songs like “Golden” and “Lullabye.” During the chorus, lead singer Patrick Stump sings “And send a message, ‘I was young and a menace.’” with various autotune pitches repeating “young and a menace.”

“Young and Menace” was the first official released music video for the album.

While “Mania” showcases the band’s modern songs, it still pays homage to their past work. Their song “Stay Frost Royal Milk Tea” represents their love for long and obscure song titles from their previous album From Under the Cork Tree. “Sunshine Riptide” also represents frontman Pete Wentz’s play on lyrics. One that stands out is “The sign says don’t tap the glass but I read it in reverse, ssalg eht pat t’nod syas ngis ehT,” which is just the lyrics sung backwards to show they did read the sign in reverse.

Even their music videos use the band’s strange obsession for music video concepts that are a little out of the ordinary. For “Wilson (Expensive Mistakes),” the band mocks how ridiculous As Seen On TV advertisements are by pretending to sell old band relics for insane prices. “Young and Menace” has a child who wanders into a house with two llamas, and one of the llamas turns out to be Brendon Urie, frontman for American rock band Panic! At the Disco.

Brendon Urie featured in “Young and Menace” as one of the llamas.

The only disappointing factor in “Mania” was the release date. A month before the record was supposed to be available, all band members unanimously decided to record the album a second time because it did not demonstrate their best work. That meant their U.S. tour setlist was filled with older songs with the exception of “Young and Menace,” “The Last of the Real Ones,” and “Champion.” I would have definitely wanted to hear “Church” live because of the church bell sounds in the beginning, and the lyric “And if death is the last appointment then we’re all just sitting in the waiting room.”

Some of my personal favorite songs would be “The Last of the Real Ones” and “Hold Me Tight Or Don’t.” For “The Last of the Real Ones,” the piano throughout the song gives it a romantic sentiment and displays Stump’s versatility in instruments. For “Hold Me Tight Or Don’t” the music video is themed as Day of the Dead, a Mexican holiday that honors the ancestors and passed relatives of families. Both songs achieve success in entertaining me and having me sing along to the catchy lyrics such as “I was just an only child of the universe until I found you.”

Go out there, grab a friend, and listen to the new and revamped Fall Out Boy!