It’s 65 degrees and sunny on a Saturday morning. Scores of athletes are crowded in the bleachers. Friends and parents clutch the black fence that encircles M-A’s track and lean over for a better view. Jumpers do run-throughs. Coaches in baseball caps pace with clipboards, and top finishers mingle on the field waiting for their moment on the podium. Charlotte Schroeder stands in lane four with her hands on her hips. The 300 meter hurdles are about to start. 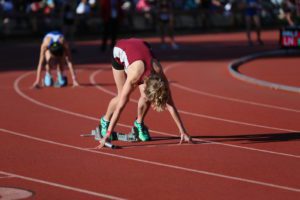 She takes two deep breaths and closes her eyes, then jumps twice, touches her toes and lunges back into the blocks, her blue eyes glued to the start line.

She presses her weight firmly into the green blocks and leans forward.

The gun goes off.

She is a blur as she leans into the curve. Fourteen steps — hurdle. Fourteen more — another hurdle. By the straightaway, she holds the lead. After just 46.23 seconds, her green New Balance spikes cross the finish line. She rests her hands on her hips and looks down. When she catches her breath, she grins and rushes to pull teammate Megan St. John into a tight hug.

Schroeder is completing an impressive high school track career. She is perhaps the most distinguished athlete on the Menlo-Atherton roster. At this meet, the Peninsula Athletic League (PAL) Finals, Schroeder won the 300 meter hurdle championship, something she has been dreaming about and working towards since she started running sophomore year.

Just a few weeks ago, at the annual Central Coast Section (CCS) Top 8 Meet, Schroeder became the fastest female 300 meter hurdler ever to compete for M-A. Her PAL finals time of 46.23 seconds, which broke her own school record by 0.05 seconds, will earn her a spot on M-A’s plaque of track and field records that hangs by the entrance to Coach Parks’ Field. Her hard work and talent was recognized by Palo Alto Daily News, which honored her as one of its two athletes of the week in April.

However, for Schroeder, the most important part of her season is just beginning. She not only won three blue medals at PAL championships, but also qualified her for the May 20 CCS meet in Gilroy, where she will run the 100 meter hurdles, the 4 x 100 meter relay, the first leg of the 4 x 400 meter relay, and of course, her best race, the 300 meter hurdles. 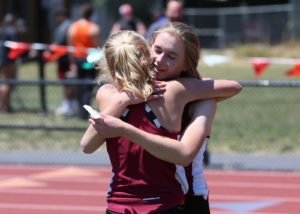 The meet will be the culmination of Schroeder’s three years of high school track and field. If you have the opportunity to watch Schroeder glide over the hurdles, you’ll notice how effortless and graceful she makes it look. But becoming a champion has been a difficult emotional and physical journey.

Like many athletes, struggles with anxiety have been an important aspect of Schroeder’s track experience. When she started running, she was “always anxious and worried.”

She recalled, “ I would feel sick to my stomach and even shake in the blocks sometimes.”

Now a senior, Schroeder still has trouble sleeping before some meets— like May 13’s Peninsula Athletic League finals. But by working through this tension for years, Schroeder has developed coping mechanisms that calm her when she’s in uniform and on the track.

To get into a “racing mindset” the hurdler goes through the same motions every time. “I know it may sound cheesy,” Schroeder explained, but “when I get into the blocks, I always take two deep breaths and close my eyes, imagining I’m breathing out black clouds of negativity and worry.”

Sometimes, for extra good luck, Schroeder wears a ring her grandparents gave her mother back when she was in high school and ran track.

The senior actively seeks to support underclassmen who struggle with anxiety that parallels her own from a couple years ago. “I try to help the girls as much as I can, because I know how it feels.”

Junior hurdler Sarah Kahle recognizes Schroeder’s mentorship: “last year was my first year, and I remember before each 100 meter hurdles I would get so nervous I felt like I was going to throw up. And each time, Charlotte would comfort me. It helped a lot… I’ll definitely miss her because she’s one of those ‘glue people’ you know?” she joked. “She just holds our team together— it’ll be really different without her.” 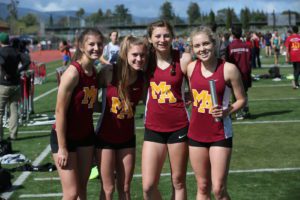 While Schroeder has been a leader on the team, track has also been important to her personal development. “Track was probably one of the biggest and best choices I’ve ever made in my life,” says Schroeder. “My teammates make me feel like I’m part of a family, and they push me everyday to improve myself and always believe in me.” According to Schroeder, this is exactly what makes track unlike any sport she has ever been a part of. “To me,” the senior explains, “track means being a individual who competes for a team effort. We are all trying to better ourselves to support each other.”

Her friends have also played a key role in making track a memorable experience. “The girls are so fun and extremely talented … one of my best friends, Megan St. John, pushes me every day in the hurdles and has really helped me cope with my anxiety before big races. We’re always there for each other!” Schroeder thinks of her two relay teams as sisterhoods. “[We] always have each other’s backs and know that we are there for one another.” She asserts, “I will never forget the amazing friendships I’ve made with all of them.”

Next fall will mark the beginning of yet another journey for Schroeder. She’ll be a freshman at San Francisco State University (SFSU), where she plans to study marine biology. She’ll try out for the track team, and will hopefully be hurdling in SFSU’s purple and gold uniform next spring. Though she’ll be at school 30 miles from the track where she currently spends hours every day, she is confident her support network of friends, family, and coaches will remain part of her life. “I will definitely be visiting them next year!” Schroeder promises.