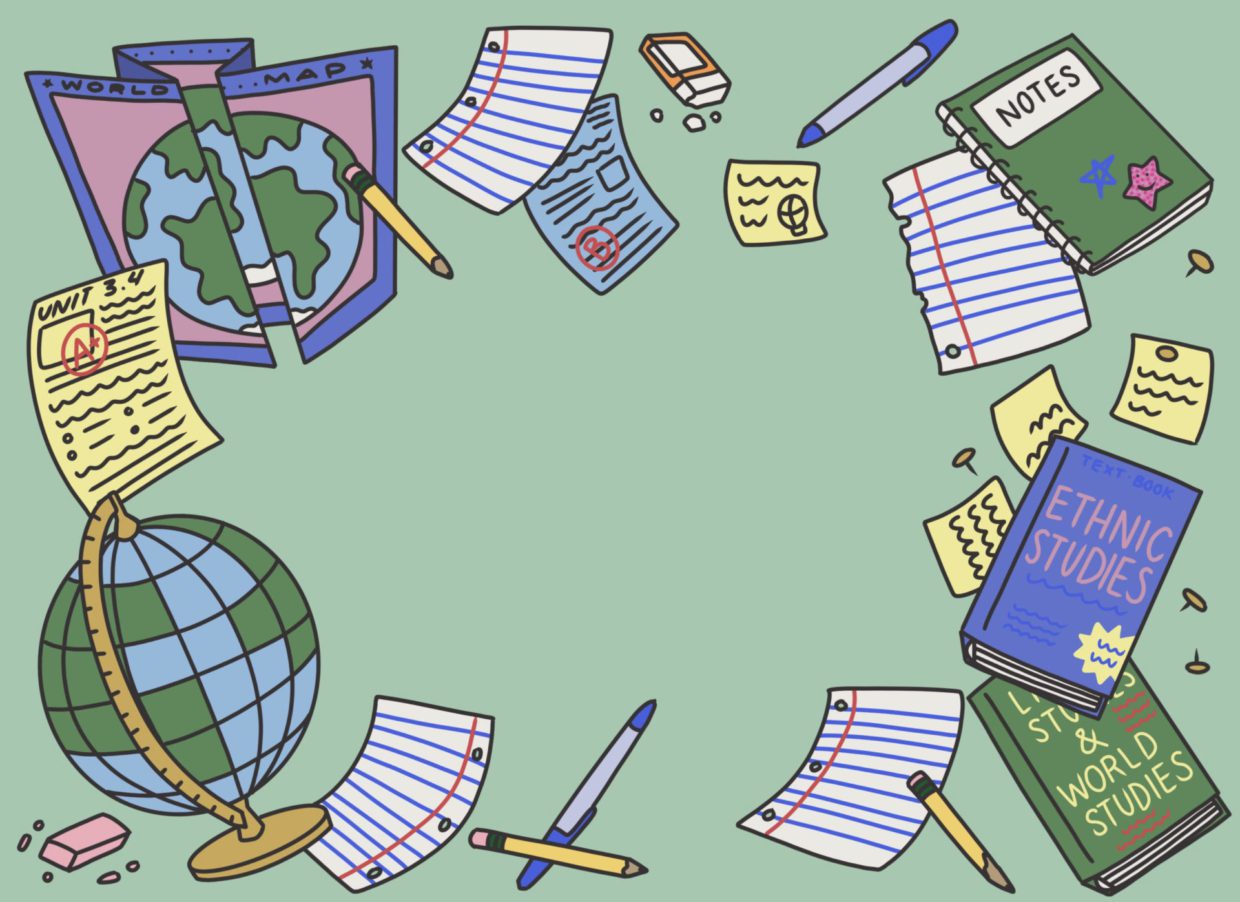 Last fall, a group of teachers from M-A and other Sequoia Union High School District (SUHSD) schools, proposed an Ethnic Studies course to be implemented into the history curriculum. Following the national reckoning with racial injustice last summer, calls for the course grew, but community members have also expressed their concerns over possible ties to the state’s controversial Ethnic Studies Model Curriculum.

Beginning next year, Ethnic Studies will replace the current ninth grade World Studies class, which will instead be taught sophomore year. A unit on European history will be included in the World Studies curriculum, while junior and senior year history requirements will remain the same.

This plan comes not long after the Ethnic Studies Model Curriculum (ESMC), a bill that would have made Ethnic Studies a statewide high school graduation requirement, was vetoed on September 30th, 2020, by Governor Gavin Newsom. In his message to the California state legislature, Newsom avoided listing specific issues he had with the bill, but did point to the need for revisions when there is “much uncertainty about the appropriate K-12 model curriculum for ethnic studies.”

As a whole, the SUHSD Ethnic Studies curriculum does not selectively teach about specific ethnic groups and instead centers around more loosely defined units like Migration and Movement and Systems of Power. Diana Nguyen, a World Studies and Modern European History teacher at Sequoia High School, explained that Migration and Movement aims to look at “how ethnic communities have changed the world around them, how they have been a place of support for each other, and how they have built a community,” while a Systems of Power unit would analyze “how history has shaped your own experience today.” This differs from the ESMC, which instead specifically highlights the histories of four ethnic groups: African Americans, Chicano and Latino people, Native American and Indigenous people, and Asian Americans.

Stephanie Cuff-Alvarado, an Economics teacher at M-A and one of the teachers that led the Ethnic Studies course proposal, explained that this is because, “when we talk about race and power, we want to acknowledge that we’re not talking about groups as monoliths.”

An excerpt from the District’s Ethnic Studies course proposal explains this concept when it says, “Intersectionality and the critical skills of Ethnic Studies are key in our framework and in all our units, departing from a traditional ‘Ethnic Studies’ model that divides each unit into racial categories.” Unlike the current World Studies course, which M-A history teacher Anne Olson said “gives students an opportunity to learn about non-western cultures and histories,” Ethnic Studies aims to give students the “necessary skills and contexts to make sense of local, national, and global histories through a lens of race, gender, and class.”

Ronald Sanchez, who is a first-year teacher at M-A and is currently teaching Modern European History said that the purpose of Ethnic Studies is not “just learning about African American History, Chicano History, or Asian American History,” but that “Ethnic Studies is meant to help students understand what their place in the world actually is and to help them explore their identities, what they have meant historically within this country, and how they fit in today’s society.”

At a SUHSD Board meeting in mid-October, members of the community expressed both their concerns and their hopes for the Ethnic Studies proposal. “I urge that the board not base the curriculum on the ESMC,” said M-A parent Rachael Barasch. “The ESMC was so problematic and riddled with divisiveness.”

The second proposal of the ESMC created controversy in August of last year, only a few months after the first proposed version also faced backlash for the way it misrepresented many ethnic groups. The central cause of controversy over the second ESMC stemmed from concerns of Jewish groups over the way the curriculum discussed relations between Israel and Palestine and claims that the curriculum fails to clearly define antisemitism.

Because of the controversy caused by the ESMC, a significant number of public comments, like those of M-A parent Devin Prouty, addressed concerns that the plan proposed to the Board would share similar ideas. Prouty said that although he supports the “broad aims of this proposal” he has “some concerns over the implementation.” He asked the Board, “What assurances can you give anxious parents and families that this curriculum will not promote antisemitism, either overtly or covertly?”

Alan Fisher, the parent of a former M-A student, also shared his concerns about possible antisemitism in the proposed Ethnic Studies curriculum and “the way in which this curriculum was constructed.” He said that the proposal “had antisemitic underpinnings; it is written by a group with heavy ideology and jargon…[which] you can see in the curriculum.”

Cuff-Alvarado and Olson have pioneered the development of the new curriculum. In response to the concerns about this course’s connections to the ESMC, Olson said, “We’ve already done the work ourselves to create a curriculum that is not xenophobic, that is not antisemitic, that features unheard voices, and that is local. I think that there was some confusion about the connection between our proposal and what was happening in Sacramento. They are two completely separate things.”

Former SUHSD Board President Allen Weiner also addressed these concerns during the Board meeting, saying, “There is no suggestion that we adopt the state’s Ethnic Studies Model Curriculum, so that is a straw man that people are expressing concerns about.” Weiner emphasized, “This curriculum is not the ESMC and so I don’t think we have to be worried about those concerns or objections.”

While some people expressed their concerns over the implementation of an Ethnic Studies course, others, like Carlmont alum Marjan Moshiri, shared their support for the proposal. Moshiri, who took the course in her senior year at Carlmont, said, “It is vital that everyone be exposed to Ethnic Studies. If it was not for this course, I would not know so many of the important things I know today.”

M-A alumni Mara Cavallaro and Ella Missan, two of the creators of the original petition that called for the addition of Ethnic Studies to the SUHSD’s curriculum requirements, also spoke at the Board meeting. Cuff-Alvarado explained that the “conversation about Ethnic Studies as a course requirement informally started among teachers a couple years ago.” However, she said that the growth of the Black Lives Matter movement last year and the petition created by Cavallaro, Missan, and two other M-A alumni, Danae Brister and Alex Chang, “launched the conversation to real action.”

When talking about why the proposal for Ethnic Studies has come about now, Alex Chang said, “Of course people will want to say ‘our current moment in history’ and whatever, but I kind of hate that honestly.” Chang explained that to her, “Ethnic Studies is something that people have always wanted.” Those in power, she said, did not understand “the value that Ethnic Studies has to students of color and how it can really transform a student’s high school experience.”

Brister said, “Personally, I grew up in the Menlo Park District my whole life, so I went to Encinal and Hillview. I always felt like there was a lack of understanding for me, especially me as a black person in a predominantly white district.”

At the Board meeting, Missan said she supports the Ethnic Studies course and as a Jewish American student she said she believes the course is “extremely important. Learning about other oppressed groups does not minimize the reality of oppression of Jewish people in America and in reality, an ethnic studies course will allow students to explore their Jewish identity in a way they weren’t able to prior.”

Cavallaro closed her own Board meeting comments by saying that “students of color deserve to see themselves represented in the curriculum; I deserve to have my history valued in a classroom. This district owns an educational debt to all students of color who have passed through it and it is our moral obligation to institute ethnic studies as a mandatory graduation requirement.”

Despite concerns raised by parents and community members, the Ethnic Studies course proposal was approved by the SUHSD Board in November, 2020. Starting in the 2021-22 school year, Ethnic Studies will be the required history course for freshmen and a slightly altered version of World Studies, adapted to include a unit on European history, will be the course taken by sophomores.