Editor’s Note: Since publishing, the East Palo Alto Academy Principal has confirmed that the students’ actions never put their ability to graduate in jeopardy. We would also like to clarify that our intention with the article was, above all, to celebrate the EPAA students’ commitment to activism, as demonstrated by the additional two miles they walked to participate in the rally in comparison to students from Menlo Park and Atherton.

High school students from East Palo Alto Academy (EPAA) walked for over an hour and 20 minutes to join peers from four other local schools at the March for Our Lives rally at El Camino Park today. Among the dozens of EPAA students were several seniors who left campus despite a widely circulated rumor that their principal would prohibit them from walking at graduation if they did.

EPAA senior Alysia Demery explained, “When [the principal] opened the gate she said, ‘you have 17 minutes… walk around, do whatever, but you need to come back.’ I said ‘there’s an event going’ and she ignored it.”

According to another senior, Mikey Arroyo, “She said… that it will be an unexcused absence, which means that I won’t be able to graduate…”

The EPAA students took this to mean that all seniors would be punished, although it remains unclear whether the comment was directed specifically at Arroyo. When we reached out to EPAA principal Amika Guillaume for comment, she denied telling students that they would not be able to graduate because they walked out, and expressed support for the student’s actions.

In contrast, the M-A administration has been vocal in support of student rights to protest and most students knew the only consequence of walking out would be an unexcused absence.

According to the ACLU, schools can discipline students for missing class, “but what they can’t do is discipline [students] more harshly because of the political nature of or the message behind [the] action.”

Junior Maama Fihaki, who gave an unplanned final speech to conclude the rally, said, “we thought it was the right thing, so we came anyways. Supporting this March for Our Lives was the right thing to do. Sometimes you just have to make sacrifices for the greater good.”

Demery, Arroyo, and fellow seniors Laura Gaytan, La’Jae Harmon, and Gustavo Morales expressed similar sentiments— they were going to walk out regardless and it was their constitutional right to do so. Said Gaytan, “no one is going to stop us from voicing our opinions.” 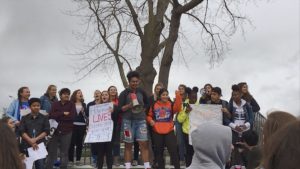 Maama Fihaki and other EPAA students gather on the bleachers. Credit: Emma Dewey.

When Fihaki described the distance he and his classmates had walked and the conflict with their principal, the crowd of students from M-A, the Menlo School, Sacred Heart Preparatory, and Woodside High School cheered wildly and raised posters in the air to demonstrate their support. After the rally ended, dozens of students and several adults from other schools came up to individually express their admiration for and solidarity with the EPAA students.

M-A senior Fiona Belk commented, “I screamed so loud when I heard they had walked for an hour and twenty minutes. I was in utter disbelief.”

Read more about M-A’s unity week and the March for Our Lives rally here.