Taking the Power Back: Survivors of Sexual Assault Share Their Stories

According to the Rape, Abuse, and Incest National Network (RAINN), a sexual assault occurs every 107 seconds. 68% of these assaults will go unreported and 98% of the assaulters will never spend a day in jail. RAINN is an anti-sexual violence organization that offers many programs to prevent sexual violence and helps victims. Two RAINN speakers offered their opinions and personal stories about college campus sexual assault and how it can be reduced. 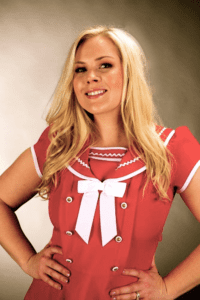 Madeleine Horn was attending Kansas State University when she was raped in her dorm room by another student. She said, “I lost my identity for quite a number of years. I lost many friendships that were important to me. I became severely depressed and engaged in a lot of unhealthy ways of coping. I no longer felt safe enough to return to school.”

After her assault, Horn suffered from PTSD and sought the psychotherapy necessary to recover. While Horn was able to receive this therapy, she recognizes that many survivors do not have this privilege. Specialized therapy is very expensive, and therefore inaccessible to a large number of victims of sexual violence.

After her assault, Horn’s lifestyle changed dramatically. Despite the challenges that arose, Horn eventually began to shed a positive light on her experience. “I would not be where I am today without having suffered sexual violence. It’s helped me overcome my fears, understand myself, and work through my insecurities. It’s made me a strong woman, a woman who has transformed her trauma into her life’s work.” In her years of recovery, Horn has discovered a passion for social justice. “I am on my way to becoming a clinical psychologist at The Wright Institute in Berkeley, California to further advocate for survivors, educate the public about sexual assault, shatter stigmas of what it means to be a survivor, encourage and give hope to women struggling to find healing and meaning in their lives, and build communities where women feel supported and empowered.”

While writing her senior thesis on sexual assault on college campuses, Horn discovered that the majority of photos of rape survivors depicted depressed, victimized, and silenced women. Horn no longer identified with the women in these photos, so she decided to work with other survivors who felt empowered like her. She created Profiles of Hope, a website dedicated to sharing images of empowered survivors and destroying the stigma that comes with sexual assault. Instead of succumbing to the social stigma and resigning herself to powerlessness, Horn decided to use her trauma to empower herself. 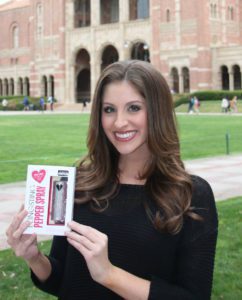 Caylynn Simonson, another member of the RAINN Speakers Bureau, was attending UCLA at the time of her assault. Simonson was raped by someone she had met through a dating application, and she immediately reported the crime. “I had made up my mind years before that if I were ever assaulted I would report to the police, so when it happened, I knew exactly what to do.”

After the assault, Simonson was afraid to leave her apartment in case she encountered her rapist or was attacked again. However, after some time Simonson decided that she did not want her assault to define her. “Ultimately, I made small changes and researched more about what to do to spread awareness of sexual assault, specifically on college campuses.”
Eventually, Simonson became a national spokesperson for Blingsting, the pepper spray company that sells bedazzled cans of keychain pepper spray cans. In addition, Simonson created a platform through the Miss America Organization, which has allowed her to speak to over 2500 college-age people about prevention of sexual assault and what to do if an assault occurs. Like Horn and many others, Simonson has turned a horrifying experience into one of empowerment. 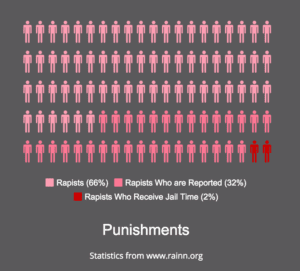 Few perpetrators of sexual violence are reported, and even fewer are sentenced to time in jail.

While women are able to speak out and take control of their traumatic experiences after the fact, the question remains why sexual assault still plagues college campuses across the country. Horn stated that much of the issue surrounds how universities take action after a report of an assault is filed. “Many universities do not have a standard procedure for reporting sexual assault in place, and if they do, it is not always accessible to the students.” In order to reduce the number of sexual assaults taking place, universities need to take responsibility and put a system in place which allows students to feel safe when reporting their attacks.

One of the most important things after an assault occurs is to report it to the police in order to ensure that the attacker is punished and is not allowed to attack anyone else. However, the justice system in place seems to put many obstacles in the way of survivors trying to report their assaults. Horn commented, “Many survivors decide not to report out of fear of not being believed, out of denial, fear of retaliation, or fear of losing friends and family relationships. Unfortunately, the reporting process is uncomfortable, often times embarrassing, and even re-traumatizing.” This painful process discourages most survivors from reporting their assaults and allows serial rapists to stay active. 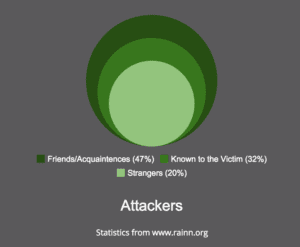 Most victims of sexual assault are attacked by someone they know.

After Simonson reported her assault, two other women came forward and reported the same rapist. To those wondering whether to report their assault, Simonson advised, “Hold your assailant accountable for what they have done to you. By speaking up, you could potentially be preventing this from happening to other young women in the future.” In reporting the crime, Simonson stopped her rapist from attacking other women near her and raised awareness of the issue which haunts college campuses.

Horn stressed that while reporting her assault was the right decision for her, “survivors have a choice whether to report, and it is completely up to them. A survivor should never feel pressured into making a report if he or she chooses not to.”

In addition to allowing students to safely report sexual assaults, Simonson believes that educating people about consent would reduce the number of sexual assaults that occur. “By educating boys and girls about respect, appropriate touch, etc. you are preventing the type of mentality that leads to rape in the first place.” 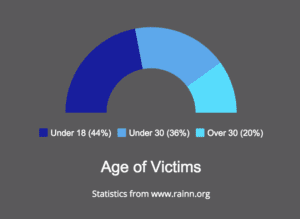 The majority of sexual assault victims are under the age of 30.

For everyone who is recovering from sexual violence, Horn advised, “First and foremost, be kind to yourself. Survivors often blame themselves, but it is never ever their fault. Surround yourself with people who love and care for you. Call the RAINN hotline to speak to a counselor and ask them to help you find your local rape crisis center. Join a survivor counseling/therapy group. Know that you are not alone in your journey to healing. Speak with a counselor through your school, your church, or seek out an individual therapist. Get to know other survivors of sexual assault and ask them about their recovery. Talk to your parents if you feel comfortable. Surround yourself with a community of people you can trust. Know that it’s a long road ahead, so pace yourself. Allow yourself the time and space to grieve. Make an appointment with your local Planned Parenthood for STD testing. Do not give up!”

Simonson added, “Personally, I believe that empowering yourself by speaking up is what starts the recovery process; whether is it sharing your story to a counselor, a friend, family, or in front of hundreds of people. Every time I share my story, I gain strength. Every time I share my story, my voice becomes louder and stronger. I actively choose to not let the actions of my assailant affect the person I want to become, and that is how you become a survivor.”