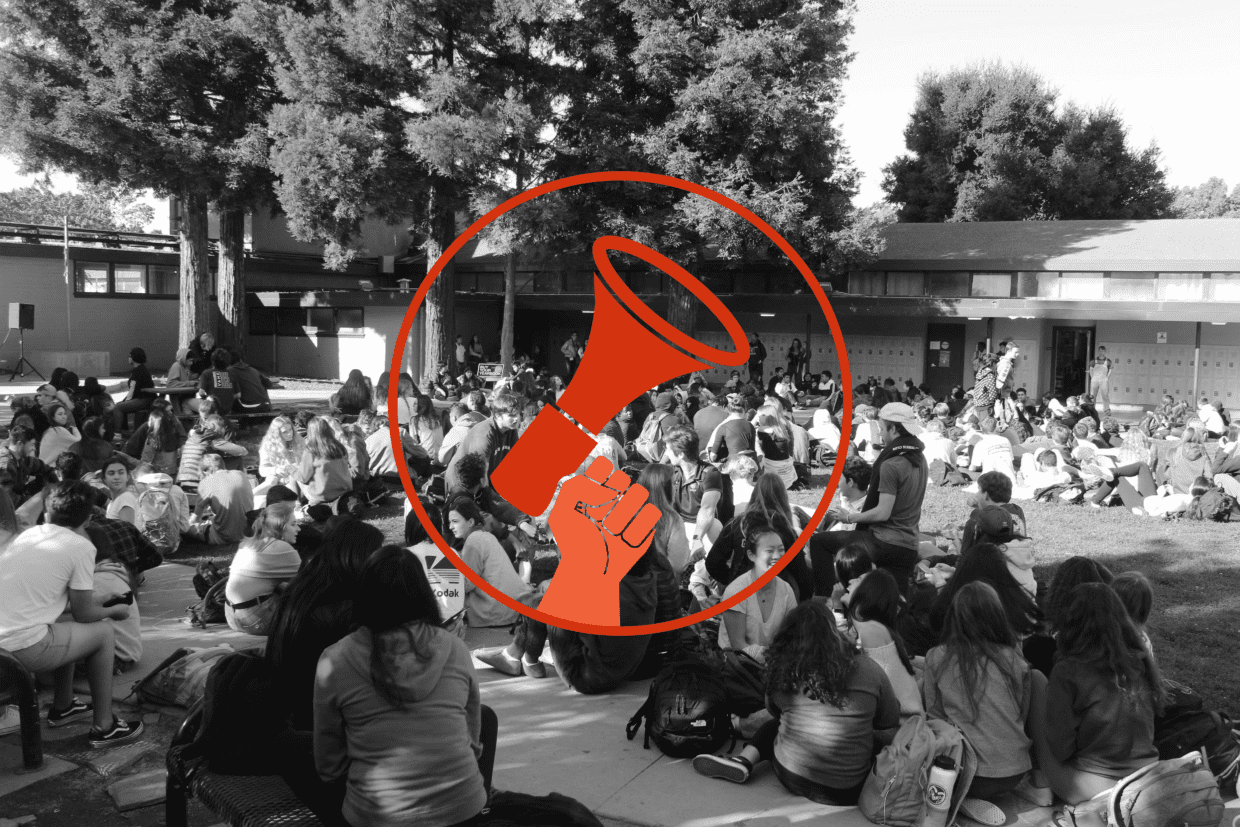 Editorial: Do We Deserve Student Representation?

By fifth period on November 15th, M-A had reached a boiling point. Over two hundred students left class to protest the proposal to end the policy of teachers handing out graduation diplomas, leaving some classrooms nearly empty. The lunch period before the sit-in, administration held an open forum in the library for students to voice their concerns. The subsequent protest on the Green revealed a build-up of student anger toward the administration stemming from a feeling of being voiceless.

The Mark Staff believes that to remedy the crisis of misunderstanding between students and staff, administration should enact consistent and accessible channels of communication; students must use and respect these channels instead of resorting to protest and personal attacks; and we —student journalists —must inform the student body in a timely manner of proposed changes to encourage informed action.

Currently, the Shared Decision-Making Site Council (SDMSC) is M-A’s formal channel for student representation. According to the M-A website, the SDMSC holds monthly meetings to make “policy decisions for the school” and is where the proposal to end the graduation diploma tradition originated. While any student can attend meetings, only students vetted through leadership, such as class advisors and presidents, are allowed a vote in the council. In total, the student body is allowed four votes.

Of the students interviewed by the Mark staff, few were aware of SDMSC meetings and none have ever been to one. Senior Elonjanae Wilson Banks said, “I’ve heard of meetings where students can go, but I don’t know much about it.”

Among students eligible to vote on the council, two are regular attendees: junior Annika Abdella and senior Angela Chan. None of the students the Mark interviewed seemed to know who their representatives on SDMSC are. Senior Amy Parada said, “I didn’t know about [the SDMSC]. I don’t even know who our class presidents are.”

Clearly, we have a communication deficit. While the SDMSC serves as a decision-making body where students can express their voices, most are woefully unaware of its existence and the topics addressed. Who should students reach out to for their opinions to be considered by representatives in the SDMSC? There are currently no student names or contact information listed in the representative slots on the SDMSC page of the M-A website. In order to represent the will of the student body, then, voting representatives must resort to guesswork.

As the M-A Chronicle reported in September, Leadership will discontinue the class president position going forward over concerns of election foul play, meaning there will be no elected student representation under the new model. Last year, a Mark investigation revealed that the lack of security in the voting process allowed for votes from non-M-A students to be included in the final tally–only 57% of the votes were valid. Additionally, confusion around when the ballot would close resulted in a victory that some suspected was part of a conspiracy.

Last year, Leadership invested in new voting software, but the disrespectful behavior of students plagued the campaign. Amoroso said, “I was thoroughly embarrassed to be the advisor who runs the elections, due to the students slandering their own classmates’ names, starting rumors like people are able to buy their votes, and probably the most disgusting and embarrassing moment—when [a flyer with a picture of] two candidates was urinated on in a toilet.” It’s easy to peg the discontinuation of the class presidency as an attack on student voices, but until the student body can learn to respect the process of democracy, do we deserve to have this voice? Amoroso is not the first activities director to eliminate class elections. In fact, he revealed that every activities director in recent memory has ridden the school of class elections at some point in their time at M-A.

Student behavior and rhetoric at both the open forum and the sit-in got ugly. The main takeaway of many students’ speeches was “f— admin” and one student was seen blaming the principal for her suspension while brandishing her middle fingers; a gesture intended for principal Simone Rick-Kennel. In the case of the graduation diploma controversy, Chan said tensions ran high at the open forum during lunch with members of the administration because “it was the first formal opportunity for students to speak directly with staff.” Chan continued, “If anything, I think the open forum revealed the urge that students feel to be heard by the administration and the lack of attention they felt that they had received up to that point.”

Senior Isabelle Mimeles, who helped organize the sit-in, said, “A lot of people during the sit-in were mad at admin. I don’t think that admin even knew that so many students wanted to [keep the diploma tradition]. I think they just thought students didn’t really care.” Mimeles explained that a sit-in was the easiest way to organize masses of students to share their opinions. She addressed how at times the sit-in got out of hand, but said it was ultimately a success because in January, the SDMSC voted to keep the tradition.

While a high school is not a proper democracy, the student perspective is a necessary component to a harmonious campus, and open discussion encourages young people to learn self-advocacy skills for the future. In practice, though, democracy is tedious. Few students are willing to endure long meetings discussing budgeting details with administrators, and several students from leadership, though not elected representatives of the student body, have been commendable for their willingness to undergo boredom for the sake of being heard. In fact, M-A’s lack of student-administrator conversation originates from students’ disinterest over time. During the 2017-2018 school year, Kennel and the administration offered regular open forums called Bear Chats. The forums were discontinued after student interest waned; according to Kennel, “Few students came, and if they did, it was more specific to their situation that could be addressed via another channel.”

Surely the enthusiasm for the sit-in, though partly from genuine concern over continuing tradition, also arises from the glamour of protest. In any demonstration like the one on the Green, participation becomes performative, and teens can be counted on to go to extremes to make their friends laugh.

Here there is an important distinction: at the sit-in, some students took the chance to poke fun at and roast administration, while others took the chance to bring up unrelated issues and concerns because it felt like their one opportunity to be heard. As always, the excitement for student representation should be for the right reasons, not for the thrill of cutting class or to meet up with one’s friends during fifth period on a Friday. The sit-in was an important catalyst for the decision to uphold the diploma tradition, but ultimately the most effective thing to do is to provide regular avenues for student expression.

If the SDMSC is to be accepted as the primary means for student representation in policy decisions, the administration should publicize (a) how the body operates with regards to policy-making and student representation and (b) the topics and proposals on M-A Today, Canvas, or via emails so that students remain informed. According to Chan, in the case of the graduation diploma proposal, students were “upset about being left in the dark and passionate about being heard.” Had the administration involved students more in the decision-making process by sending out a school-wide announcement asking for input, perhaps students wouldn’t have felt blindsided and been driven to protest.

Moving forward, the journalism staff of both the Chronicle and Mark commits to having at least one journalist in attendance at future SDMSC meetings. As journalists, we have a responsibility to inform students on any proposed or enacted changes to their community, which requires more thorough reporting on the SDMSC. We too can do better. Many students first found out about the proposed changes to the diploma tradition by way of a social media post promoting the protest. With journalistic representation at SDMSC meetings, students will be able to access credible, fact-checked information without worrying they have been kept out of the loop.

This semester, the administration has proposed monthly student town halls led by SDMSC representatives. Kennel described that the meetings will take place during flex time in the PAC “to update students on issues that come up through the SDMSC.” These town halls are a step in the right direction; their time and place will be accessible to all interested students, and the format of open discussion will promote transparency between parties.

Chan said, “Being one of the few student reps in SDMSC, there are only so many people we can talk to and things we can say to try to influence these school-wide decisions.” When the administration expands the open forums to town hall meetings, students should speak up if they are bothered by a policy or a lack thereof. That said, students should also be willing to respect and listen to the concerns of administrators. Chan said students should “understand that the administration is reaching out to them for feedback” in these forums and not “jump to conclusions.”

A democratic system only works when there is a frequented platform for constituents to make their voices heard. Both students and administrators must approach these conversations with empathy and a willingness to compromise; at M-A, a healthy system of representation cannot exist without either.