“All students will graduate college-ready, empowered with the knowledge, skills and passion to positively impact their own lives, their community and the global society,” proudly reads the large, baby blue steps at the center of East Palo Alto Academy’s (EPAA) state-of-the-art campus. A small charter school of only 320 students just passing its 17th year, EPAA is making its mark as a leader of civic learning curriculum: on Friday, May 11, the school received the California Distinguished School of Civic Duty award, one of only six in the state this year.

The presentation of this award topped off an exciting exhibition day, as groups of EPAA seniors presented their Compassion in the Community projects to a judging panel, the product of a six month endeavor to identify, analyze, and address an issue in their community.

Compassion in the Community was a program started two years ago by Caren McDonald, EPAA’s senior English teacher and junior advisor, who had a vision for transforming what was previously a reflections senior exhibition into an action-based one. These senior projects are a capstone on an entire high school career of project-based, social justice-themed learning; every year, students present an exhibition on a different topic, starting with STEM as freshmen, genocide as sophomores, civil rights movements as juniors, and finally Compassion in the Community as seniors.

“That’s a powerful, well-integrated program, that I think really pushes young people to think about their place in the world. I think it empowers young people who come through this program, based on the little bit I’ve seen already,” said Justice Charles Smiley, the Presiding Judge of the Juvenile Court of Alameda, who presented the Civic Duty award on Friday. 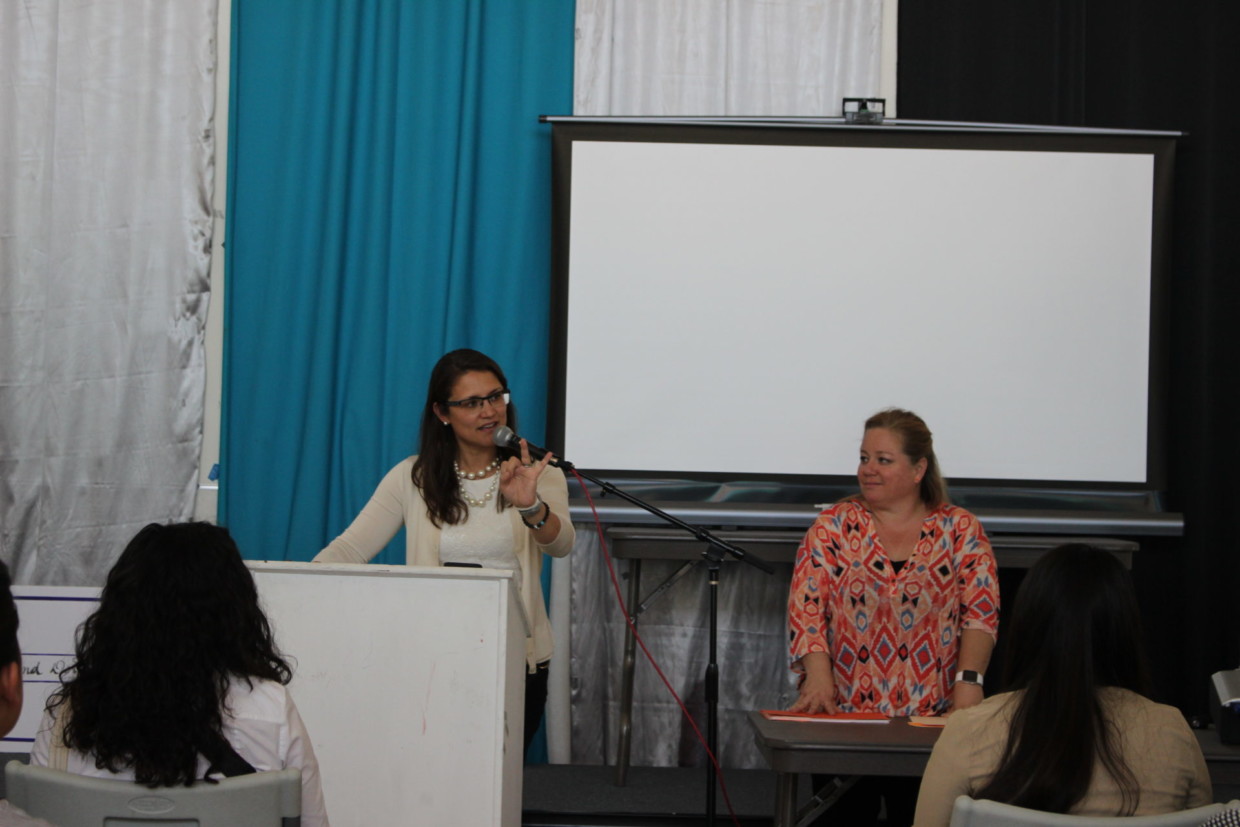 For EPAA principal Amika Guillaume, this empowerment is particularly important for communities like East Palo Alto. “When you’re working with a community where we have such a high level of students who qualify for reduced or free lunch, and a high number of students whose parents are working multiple jobs but never had the opportunity to go to advanced education, it’s a very common sentiment that ‘Oh, gosh there’s so many things I’d like to do, but I can’t.’ And there’s this… cycle of thought where I just can’t get out of this,” she said.

In small groups of their choosing, seniors identify an issue they wish to tackle in their community. Every group goes through three phases. In Phase 1, they survey needs in the surrounding community, and then propose a project that will meet those needs to EPAA staff for feedback. Phase 2 is administering a pre-survey, implementing the project, administering a post-survey, and selecting a nonprofit to donate to if they win money. In Phase 3, students present their project, survey analysis, and nonprofit research and funds allocation to a judging panel composed of teachers and community members.

“I think it’s pretty phenomenal that what starts as these school projects, and something that’s tied to a letter grade, can be something that [students] really connect with,” said Jeannette Lok, the senior seminar teacher. Echoing Guillaume’s sentiments, she added, “I think it’s inclusive for students like ours, who are minority, low-income students, to learn about something that they can be passionate about… it brings the value of education for them.”

“Our kids… can actually compost the negative experience, the stress, the crisis… into being agents of change, and that’s just a really rich educational opportunity,” said McDonald of the senior exhibitions. 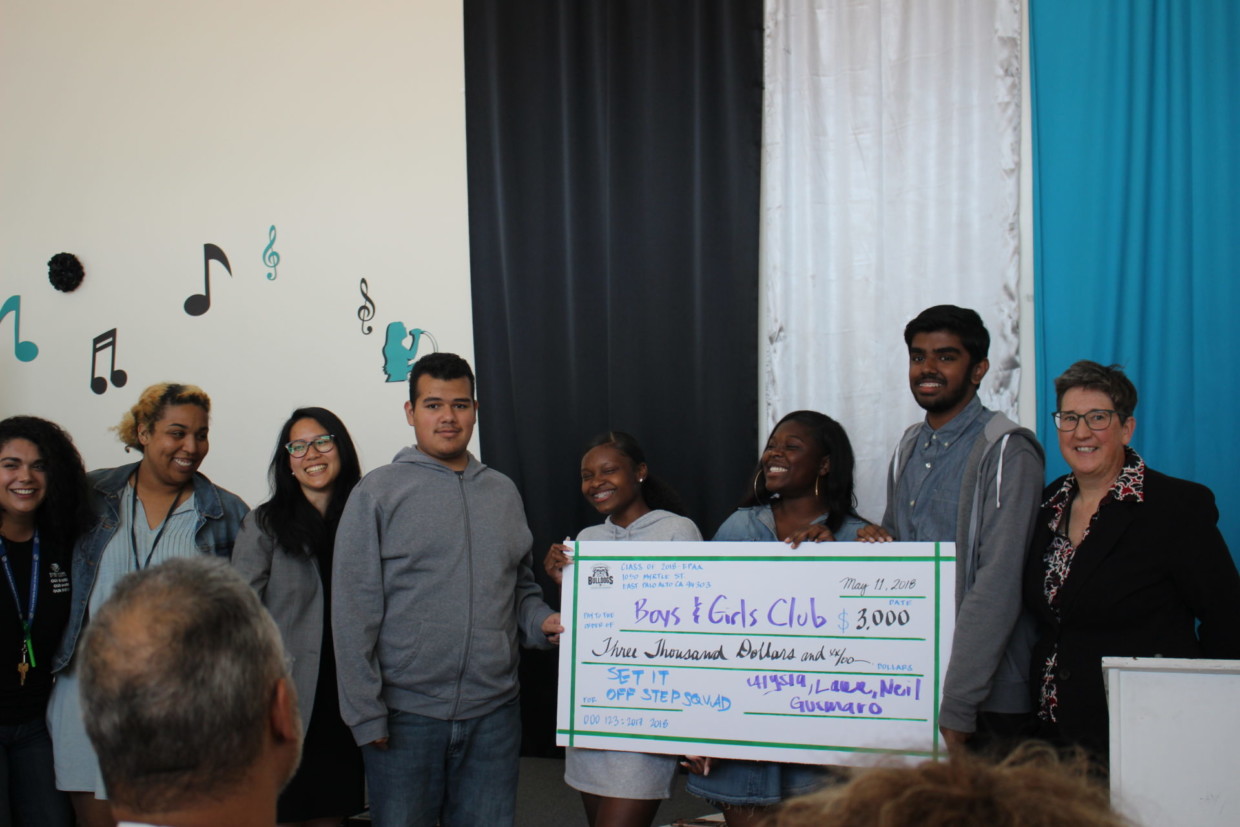 The step team beams with their first place check.

The top three groups of seniors were awarded money to donate to a nonprofit organization of their choice that matched their project’s theme. The winning team, Alysia Demery, La’Jae Harmon, Neal Prakash, and Gusmaro Lumbaro, developed a weekly step class at the Boys & Girls Club of the Peninsula (BGCP), where they teach elementary schoolers the history and social context of step as well the dance itself. “It’s sort of tough to teach that to K-5th graders… but when 90 percent of them are able to articulate the full definition of step and the African roots that it comes from, it’s all worth it,” said Demery.

Harmon and Demery are co-captains of a step team themselves, and all group members were already involved at BGCP, so this project seemed like the natural choice for their senior project. “We were like ‘oh, the little kids always watch us when we have our practice, so why not let them dance with us?’” explained Harmon.

“We’ve watched these kids grow up. We just never got the chance to interact with them, and I feel like this was a good chance to actually get to know them as individuals,” added Demery.

As the first-place group, the team was awarded 3000 dollars, which will go towards continuing the step class at BGCP. “It’s something that’s an ongoing process, so to be able to bring [the award] back to them, it feels really good,” said Demery, before the group had to rush off to the clubhouse to make their 4:15 step class.

“In that particular group, they were really able to be including all members of the group, and brought out the best in each other… They’re a smart, passionate group of young people, and positive role models to the community,” said McDonald. 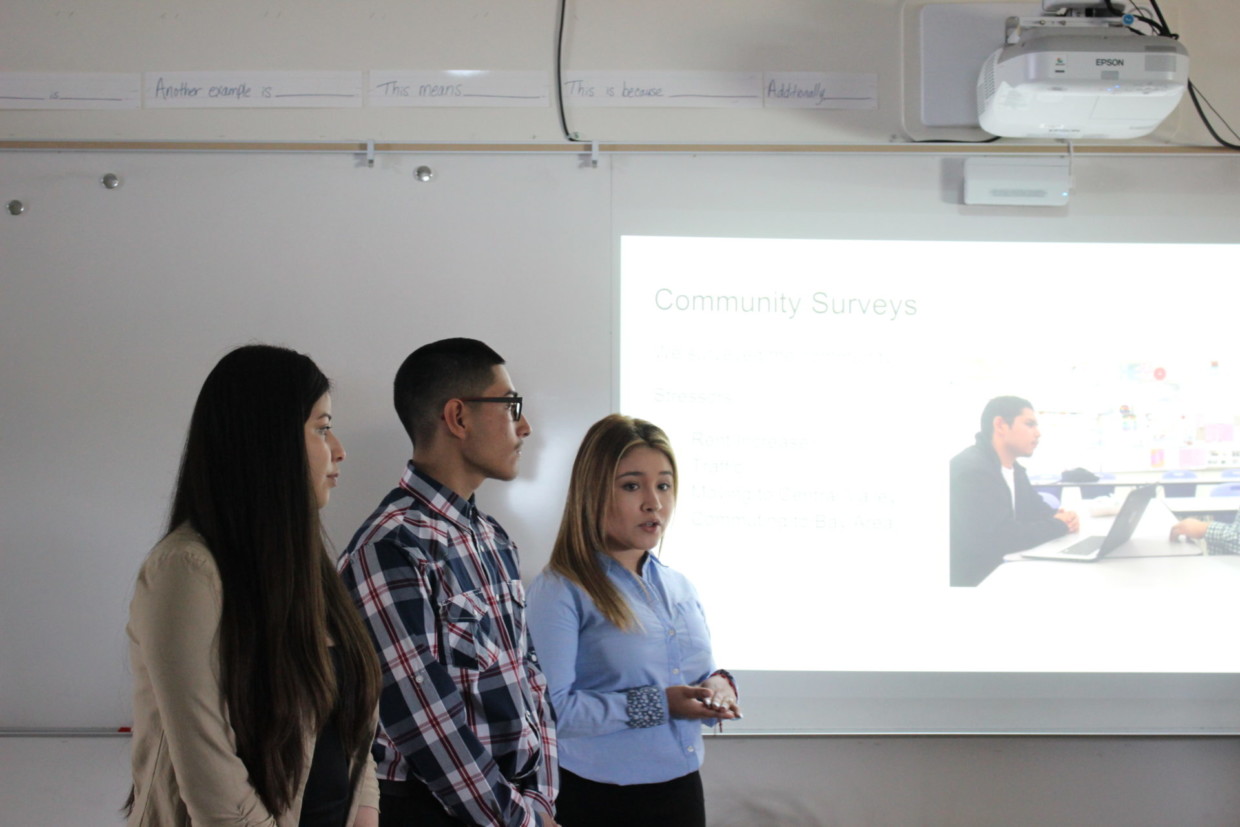 The renters rights group presents to the judges.

Tying for second place was a renter’s rights group (Ana Herrera Soto, Ana Camarena, Elsa Avelar-Ruiz, Jesus Cruz, and Alejandro Canche) and a mindfulness for parents group (Maggie Garcia, Karyna Pereda, Eva Soto-Chavez, Ema Klucovska); each group was awarded 1500 dollars. The renter’s rights group will be donating to Youth United for Community Action, a local group focused on empowering youth to make social change. The mindfulness group will be donating to the Niroga Institute, an Oakland-based mindfulness organization that, funded by the donated money, will be sending yoga instructors to train a cohort of next year’s seniors on how to educate parents on mindfulness.

The renter’s rights group decided to tackle the issue of East Palo Alto’s housing crisis. They hosted a tenant education workshop for parents on EPAA’s campus in March, and also conducted a panel at Stanford’s Haas Center for Public Service to educate Stanford students, many of whom are future Facebook or Google employees, about the effects of gentrification. At the Stanford panel, they raised 2000 dollars for the San Mateo County Emergency Housing Fund, which provides immediate relief for people struggling to pay rent. 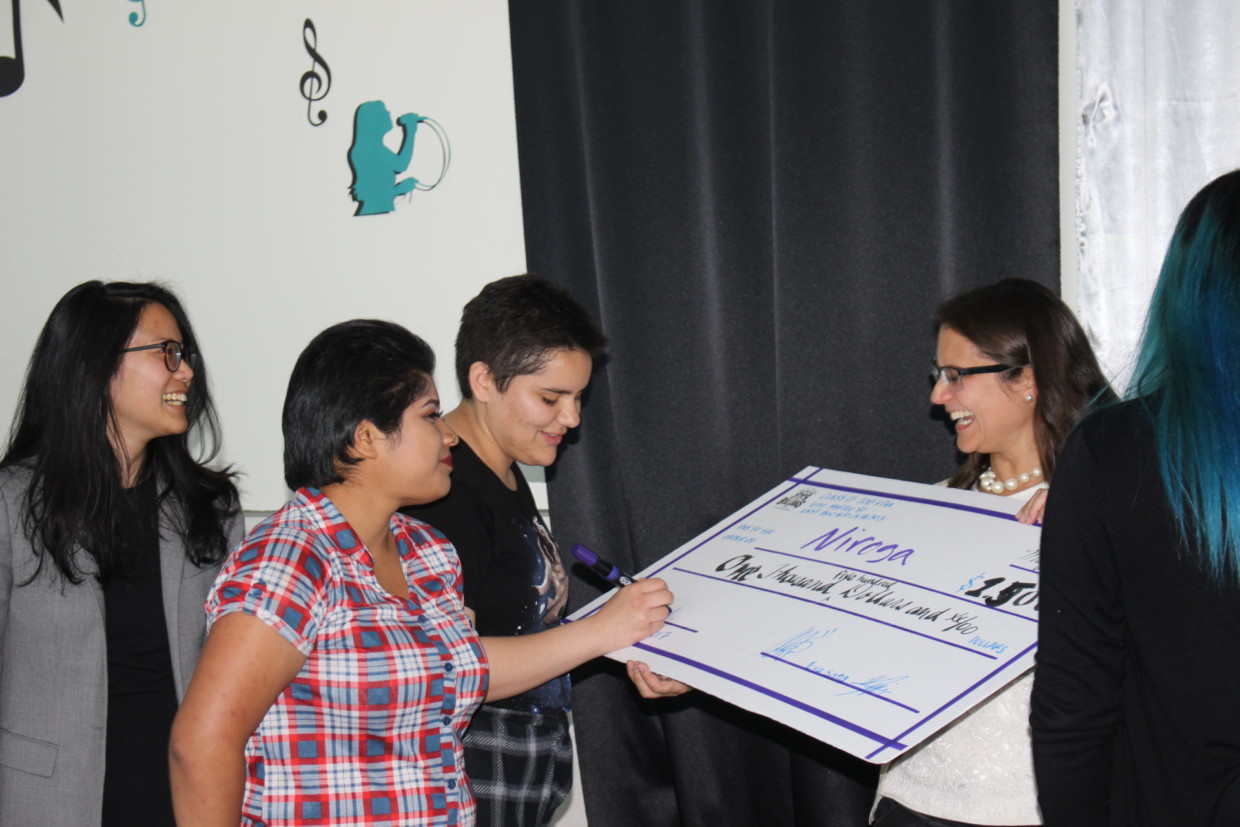 The mindfulness group signs their check to Niroga.

The mindfulness group focused on targeting Hispanic parents, and in Phase 1, they studied the impact of yoga relaxation techniques on ESR (Erythrocyte Sedimentation Rate). In Phase 2, there was Mindfulness and Yoga classes for 4 weeks. There was one class per week, and 6 parents started, and by the end, 2 parents had finished. Maggie explained that it had a positive outcome, and one parent said that “I would go to yoga classes if they were close by.”

The group’s conclusion mentioned that parents in East Palo Alto need mindfulness and yoga to help cope with stress, and that many parents need to be taught about these practices because many parents are unaware of how yoga works, or have never gotten the opportunity to actually do it.

Lok commented, “One thing you don’t see for those two groups… is that these things were bilingual. These presentations were fully run in English and Spanish.”

In other words, high school seniors were breaking down and translating legal jargon and yoga terminology for the consumption of their parents. “The language barrier is obviously a struggle for the parents, and then parents become intimidated and don’t want to participate… but if their kids are doing it… that’s the game-changer,” added McDonald. 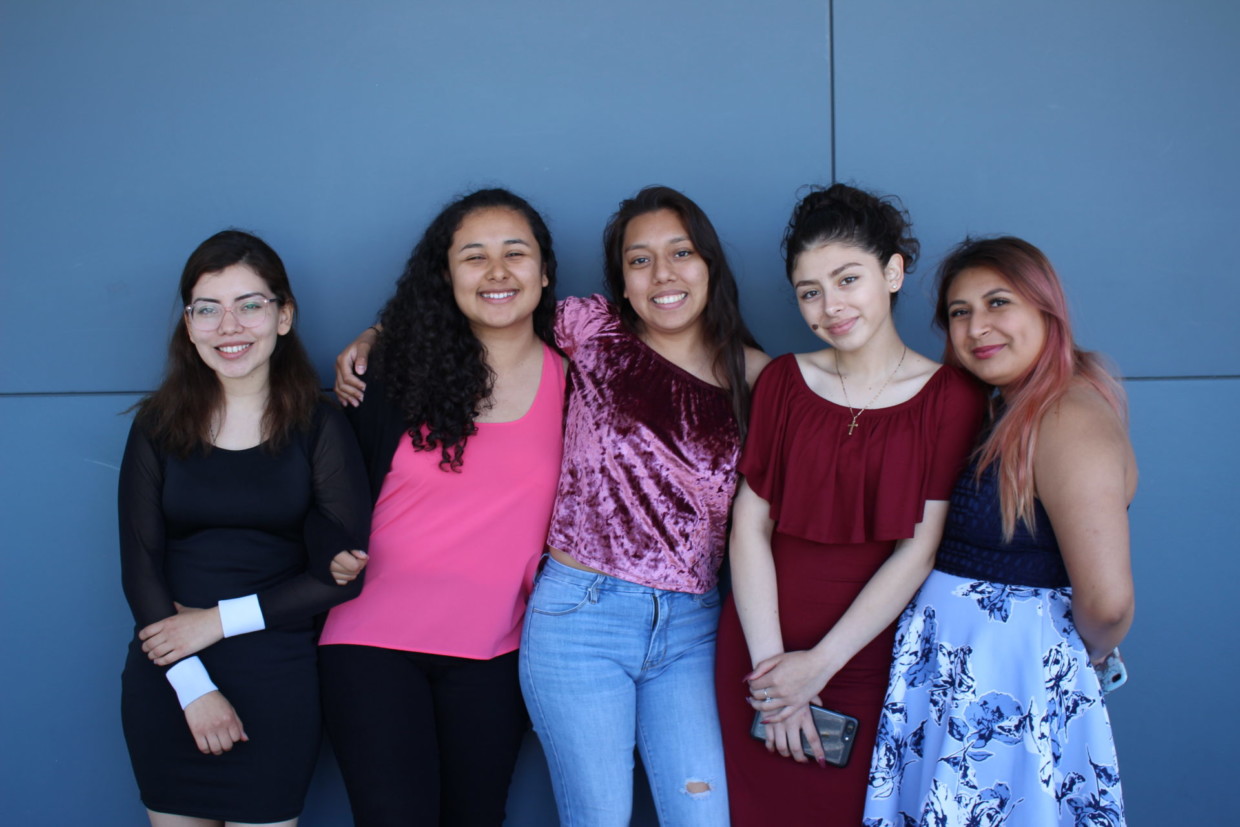 The LGBTQ group smiles after their presentation.

Although not awarded money, another group that passed with distinction — the highest possible grade — created a five week, drop-in LGBTQ support group for students at EPAA (Elisa DeLeon Anaya, Victoria Longino, Estefany Martinez, Karen Arias, and Ruby Lucatero Ayala). The group originally wanted to hold the meetings at BGCP, but their exhibition advisor recommended bringing them to EPAA, so that it would be more accessible to students. Said Arias, “I feel like we were more kind of there… to talk. It didn’t always have to be LGBTQ issues or anything, just being there to support each other like human beings, like friends… it went from being less structure to kind of like, we’re in this moment, space, how do you feel, what can we do.”

The group also met with Stanford students throughout the process, who helped advise their ideas via discussion about their own experiences as members of the LGBTQ community. Lucatero Ayala said “they really helped stabilize what we were going for and reevaluate if what we were doing was OK.”

The exhibition has impacted the group’s vision of their own future as well. DeLeon Anaya said, “In college I definitely want to become more involved in the LGBT community.”

The group chose San Mateo Pride as their nonprofit organization, which has been open for over a decade, and was the first LGBTQ organization in the San Mateo County. Lucatero Ayala said “Out of all of the organizations, their pitch was just more convincing. They were really about building a community on the struggles triumphs of being part of the LGBT community and their whole website is about creating and supporting an atmosphere.” 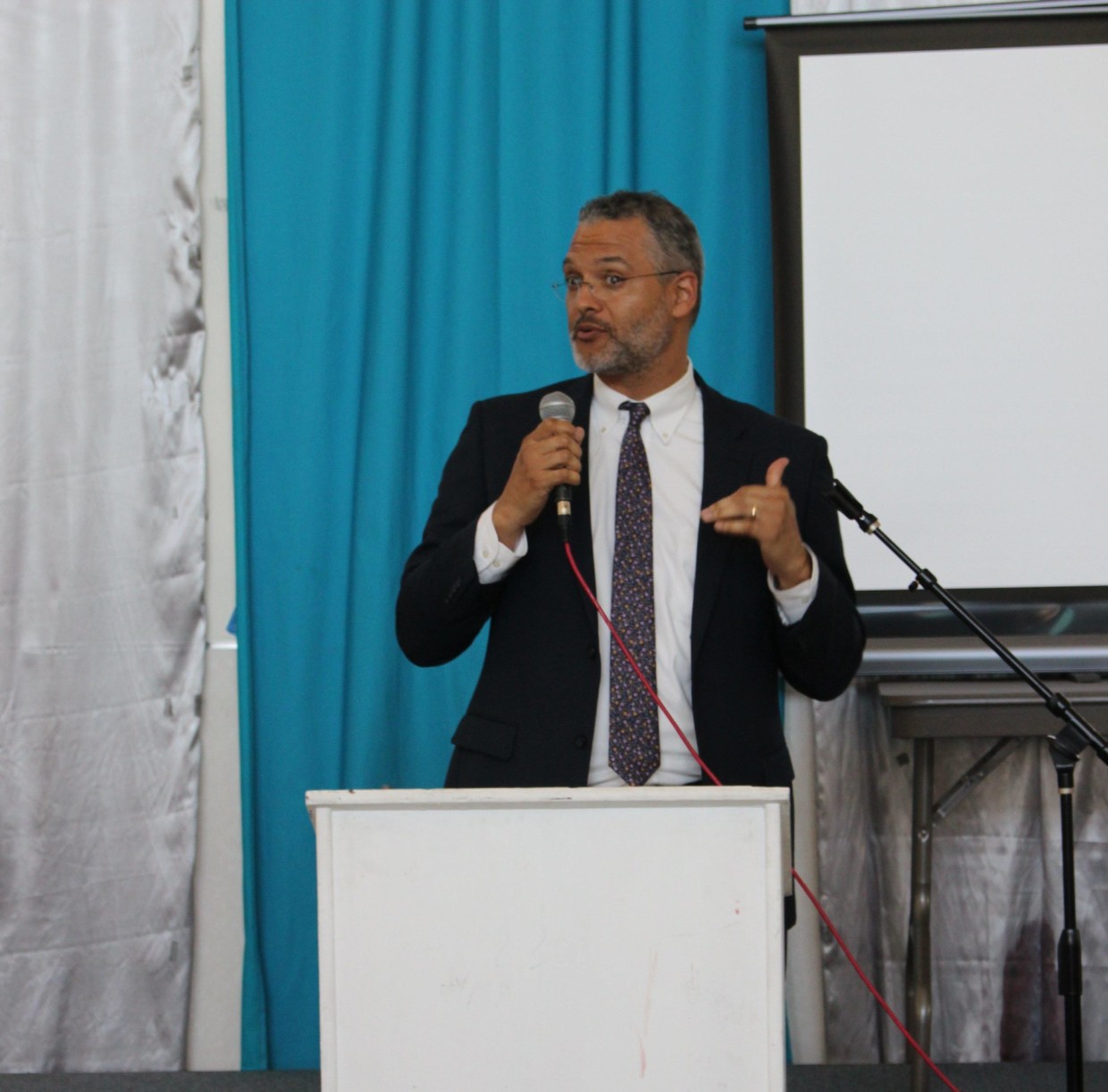 Judge Smiley speaks to the crowd.

The California Civic Duty award was created in 2013 to encourage civic learning in the K-12 setting by the Power of Democracy Steering Committee. The Committee itself was formed as a response to a broader goal within the California Judicial Branch for increasing public trust in and strengthening the court system, which involves creating a citizenship that is more invested in democracy. “The goal is to increase civic learning… and to partner with education to get it done… We’re trying to highlight the great work that’s being done in certain schools, so it can be replicated in other areas,” said Smiley, who, although he does not sit on the Committee, was sent as a representative by California State Supreme Court Chief Justice Tani Cantil-Sakauye.

That replication is not limited to just schools, however. As a judge in juvenile courts, Smiley sees the value for youth that come in and out of his courthouse: “I’m working with some of my community-based organizations to figure out ways to implement programs like this. We could never pull off something this big, but there are bits and pieces that I’m already thinking we could import… I’m here to learn too, and I have.”

To qualify for the award, schools must send in an application to the Committee. After learning about EPAA’s curriculum on Friday, Smiley remarked that the award was “a no brainer!”

He expanded that EPAA “was selected because of its innovation, the intensity, and the commitment of the school behind the program.”

The success already seen in Compassion in the Community projects in just two years of existence are an exciting foreshadow for the generations of EPAA seniors to come, and the bright futures of this year’s graduating class beyond high school.

Before announcing the winners, Guillaume snuck in a few words of wisdom for the relieved seniors. “I don’t want any of you ever to wonder how powerful you are. I don’t want you ever to wonder your ability to make the world a better place,” she said emphatically. “Don’t think about it and wonder, ‘can I?’ Know that you can if you ask yourself how and when. Because you already did it. You’ve already done it. The question is how, and when.”

Keep on the lookout to see how, and when, EPAA’s class of 2018 will change the world.