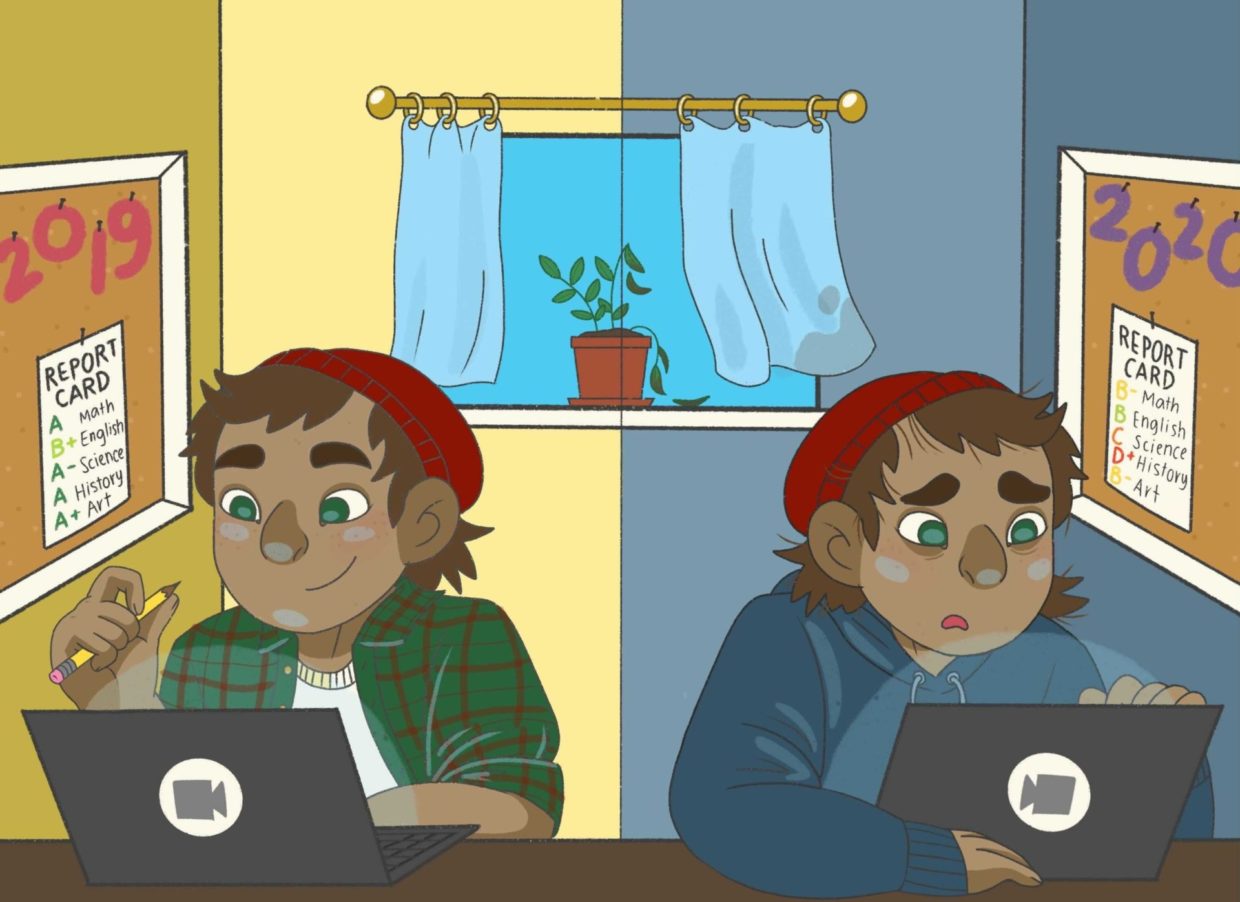 “It’s been an extremely humbling experience because it’s taken a lot of work that I never really had to put in before distance learning,” said Alice, a senior who preferred for her real name not to be published. Before this semester, Alice typically earned As and Bs; now, she is part of a group of students who have experienced their all-time worst grades during distance learning.

A report at a School Board meeting on October 28 showed that SUHSD students are failing their classes at higher rates compared to last year, according to Quarter 1 grades.

Dr. Diana Wilmot, Director of Program Evaluation and Research for the District, stated that there has been a “significant change” in students with more than one D or F grade compared to last fall. This proportion has increased to 29.0% of students District-wide from 19.7% during the first quarter of last year.

At M-A, the rate of students with more than one D or F is five points higher than the District average, at 34%. Last year M-A was also above average, but less so, with a rate of 21% compared to the District’s 19.7% for Quarter 1.

The District’s data reflects a statewide trend; according to the Mercury News and the Los Angeles Times, schools across California are suffering similar increases in failing grades.

Dr. Wilmot investigated a possible correlation between poor attendance and poor grades, but found no clear reason for the increase. Over half of the students with more than one D or F were attending more than 80% of classes. Districtwide, then, approximately 1300 students have good attendance but more than one failing grade. While students with poor attendance–less than 80%– were more likely to fail, these cases do not show the full story of how distance learning has affected grades.

District data showed that while students with poor attendance-less than 80%- were more likely to fail, a large proportion of students with good attendance also had more than one D or F.

Alice’s struggle was with AP Calculus, though she earned As and Bs in her previous math classes. In spite of meeting multiple times with her teacher, routinely completing homework, and gradually improving test grades, her grade remains low and she ultimately hopes to earn a C by the end of the semester.

Alice said, “I know what kind of student I am but especially since being constantly online, my one-on-one interaction skills have gotten worse, making talking to teachers I would otherwise have no problem approaching, just that much harder.”

Another senior, Laila, who preferred for her real name not to be published, said that she has struggled in distance learning with a class where her grades are far lower than usual. “When my grade started dropping, I started to work extra hard to get my grade up. I realize that even though I try to pay attention in class now, it’s more of a problem of retaining the information I learned. I find that through Zoom you’re just listening to a lecture for an hour through a screen. I forget pretty much everything I learned a day later.”

Losekoot added that there is a range of factors leading to a student failing a class. “For many students, it is also just harder to focus at home given the distractions that many homes contain: the comfort of a bed, the noise of siblings, or the allure of a smartphone sitting next to your Chromebook,” Losekoot said.

M-A senior Yissel Lopez said that she actually prefers distance learning since she has “more time to learn other things.” While she has not noticed any changes in her grades, she stated that it is more difficult to complete certain schoolwork outside of the classroom. “Sometimes it is hard because one class leaves homework and I don’t have time to do [it] all at once because some [assignments] are harder, like writing or doing projects,” she said.

Across the board, distance learning has posed new challenges for many students to even access classes and complete assignments, which was one of the reasons that the District changed the grading system to pass/no pass during the Spring 2020 semester.

At the meeting, Assistant Superintendent Bonnie Hansen pointed out that quarter grades do not go on official transcripts, and are similar to a progress report. “Kids have got another quarter to get these grades up prior to them going on their transcripts,” said Hansen.

Losekoot stated that in addition to efforts by the admin to support students, “Many if not all teachers have been open to helping students recover and rebuild grades in a class.”