Day five: Flowers on the green

M-A’s unity week concluded today with a memorial for gun violence victims. On the green at lunch, there was a table with flowers to commemorate the Parkland shooting deaths and others.

“It’s to remind people, as they walk past, that there is gun violence; although we already had the walkout, it’s not an issue that’s solved easily,” said Maria Ornes, who has helped to organize the activities this week. “It’s so students remember, as they are walking these halls, that other students have lost that same opportunity because of gun violence.” 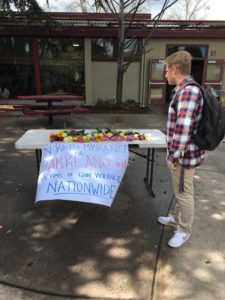 Senior Jonathan Schaff stops by to remember the victims of school shootings.

The initial plan was to involve the M-A community by having students write cards, but the leadership team decided against it because of the windy and rainy weather.

The table remained for all of lunch, and Ornes said, “We’ll keep the flowers alive in the leadership classroom, just to remind the leadership students that we’re lucky to be able to go to class.”

The flowers were supplied by Ornes and her fellow organizers.