Cut in JV Teams Leaves No Chance to Cheer and Dance

“They are trying to hire a new coach or coaches in order to support a JV team for dance,” said Annabel Baxter, captain of the dance team. “There were four teams being taught by two coaches, which is a lot, and unlike any other sport at M-A. The coaches had originally agreed to be the varsity coaches, and they said they’d continue to be the varsity coaches, but having four teams in one room and having 60 girls at a time — and sometimes only one coach could make it — it was just really overwhelming.”

Gabby Adler, cheer co-captain, stated that many times cheer will “borrow a gym to practice, or use some of the different fields, wherever nobody else is practicing.” 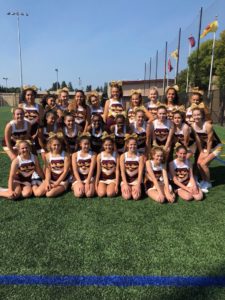 This year, with fewer girls, “the practices are more productive,” said Baxter. The captains and officers worked on creating dances during the summer and practice them with the team to perform at the football games. “It’s much easier to learn dances with a small roster,” said Knox. Previously, the coaches created the routines, adding to the difficulty of the role.

However, the halving of both teams puts girls out of a sport and further increases competition to get onto a team, as well as separating close friends. Though varsity and JV do not perform together often, both dance and cheer performed at rallies. “It sucks to see people who want to dance get cut, people who work hard,” said officer Olivia Weil, “The only reason for the cut in the team is that it was too much for one coach, too much for the room to handle.”

“We are all good friends,” added Knox.

Lucy Kuhnen, cheer co-captain, said that “we won’t be cheering for any JV teams this year, which is a little bit sad. We will just be at the varsity games, but we have a big roster, which will make it more fun.”

Baxter stated that the captains and officers run practice, leading the dance, while the coaches watch and monitor.

“We’ll try this large roster, all varsity, and see how it goes — if one unified team is a realistic goal to have, or if we need to split it up,” said Kuhnen.

In the meantime, watch the dance and cheer teams perform at varsity football and basketball games this fall and winter, as well as rallies and the dance show in the spring.