Last week, Ben Howard performed at the Greek Theatre in Berkeley. Daughter, an indie folk band, opened for Howard with songs “Smother” and “Youth.” Lead singer Elena Tonra’s voice was heartbreakingly beautiful and raw and coupled with intense guitar and powerful drums, yielded a hypnotic catharsis. Daughter’s performance set the mood for the night and was the perfect appetizer to Ben Howard’s performance. India Bourne, Howard’s best friend, played along with Howard on the cello and base.

Ben Howard is an indie folk singer-songwriter from England. He has released two full-length albums, the latest one titled “I Forget Where We Were.” Howard uses unconventional guitar techniques as he is left-handed; he plays guitar ‘backwards,’ sometimes with an overhand technique. After an angelic intro, Howard opened with the slow, haunting vocals and echoing guitar line of “Evergreen.”

A smooth transition led to “Time Is Dancing” which maintained the melodious nature of “Evergreen,” but upped the tempo in preparation for “Rivers In Your Mouth.” “Rivers” relied more on drums than preceding songs, giving it a jazzy, defiant mood. “I Forget Where We Were” was next, a simultaneously powerful and distant song played with Howard’s impressive overhand technique. The dark, foreboding “Small Things” featured a more dominant guitar line than the studio version that intensified through the song and greatly excited the crowd. 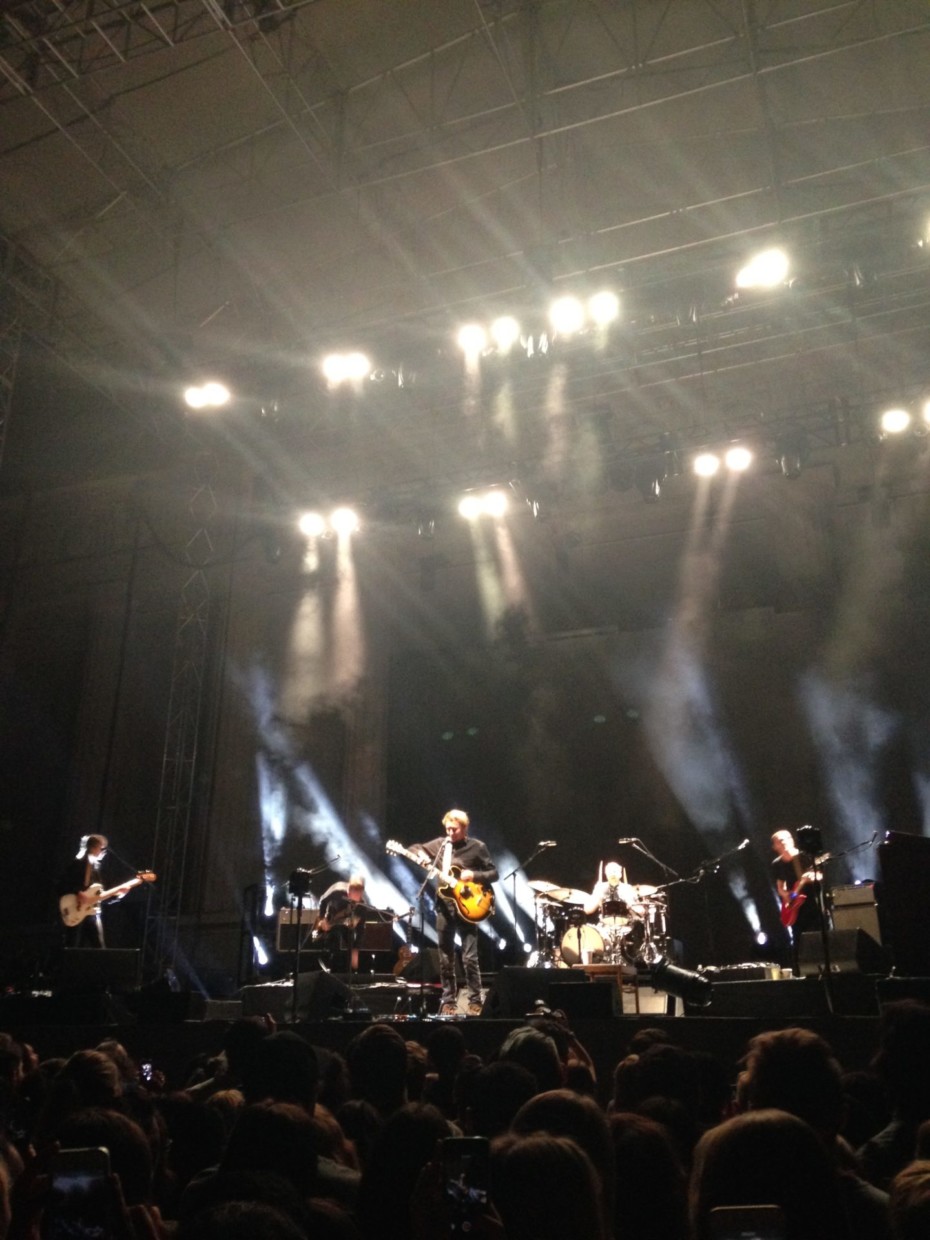 Ben Howard plays songs from his album,”I Forget Where We Were.”

Howard performed “Conrad,” a soft, guitar-driven lullaby, with a passion that carried over into the apogee of the show. “Black Flies” proved that when words fail, music speaks; although the studio version is somewhat subdued, Howard’s emotions took over onstage and seemed to transport him to another place.

After “Black Flies” Howard played “Keep Your Head Up.” The placement of this folksy, upbeat tune after such an outpour of emotion was questionable. Nevertheless, it effectively contrasted the bleakness of “Black Flies” with its cheer, reminiscent of the acoustic nostalgia of “Every Kingdom,” Howard’s debut album.

A surprising rendition of “The Fear” followed. This song was originally recorded in the style of “Keep Your Head Up,” but Howard chose instead to introduce a calculated slowness to the usually buoyant tune. Backlit by a blue glow, the band produced empyrean sound waves which rippled through the amphitheater. Later, “All Is Now Harmed” flooded the venue with its resonant melody, similar to that of “Evergreen,” and created an otherworldly effect.

The venue’s somewhat small size gave the concert a personal, immersive vibe, and the open-air amphitheater provided a great view of the starry sky. Lights from the stage projected onto the trees behind the crowd, forming abstract patterns which mirrored those on the backdrop behind the band.

The most intense song happened to be the penultimate one of the night; “End of the Affair” was simply unbelievable. Howard was once again rendered voiceless by the sheer emotion he expressed through this song, and its soulful, meditative power truly revealed the loneliness and desperation that is at the heart of “I Forget Where We Were.”

Howard concluded the night with a mesmerizing performance of “Esmerelda.” Some have said that Howard seemed impersonal or did not try to connect with the crowd during this final song. However, it could be that he was just focused on producing music, rather than on audience interaction. In interviews, it is clear Howard is a very shy person and tends to express himself through music instead of than conversation; when he gazed up at the audience he seemed to retreat into himself, overwhelmed by the enormity of the crowd.

Overall the Ben Howard concert was surreal and made his music seem even more personal than before.