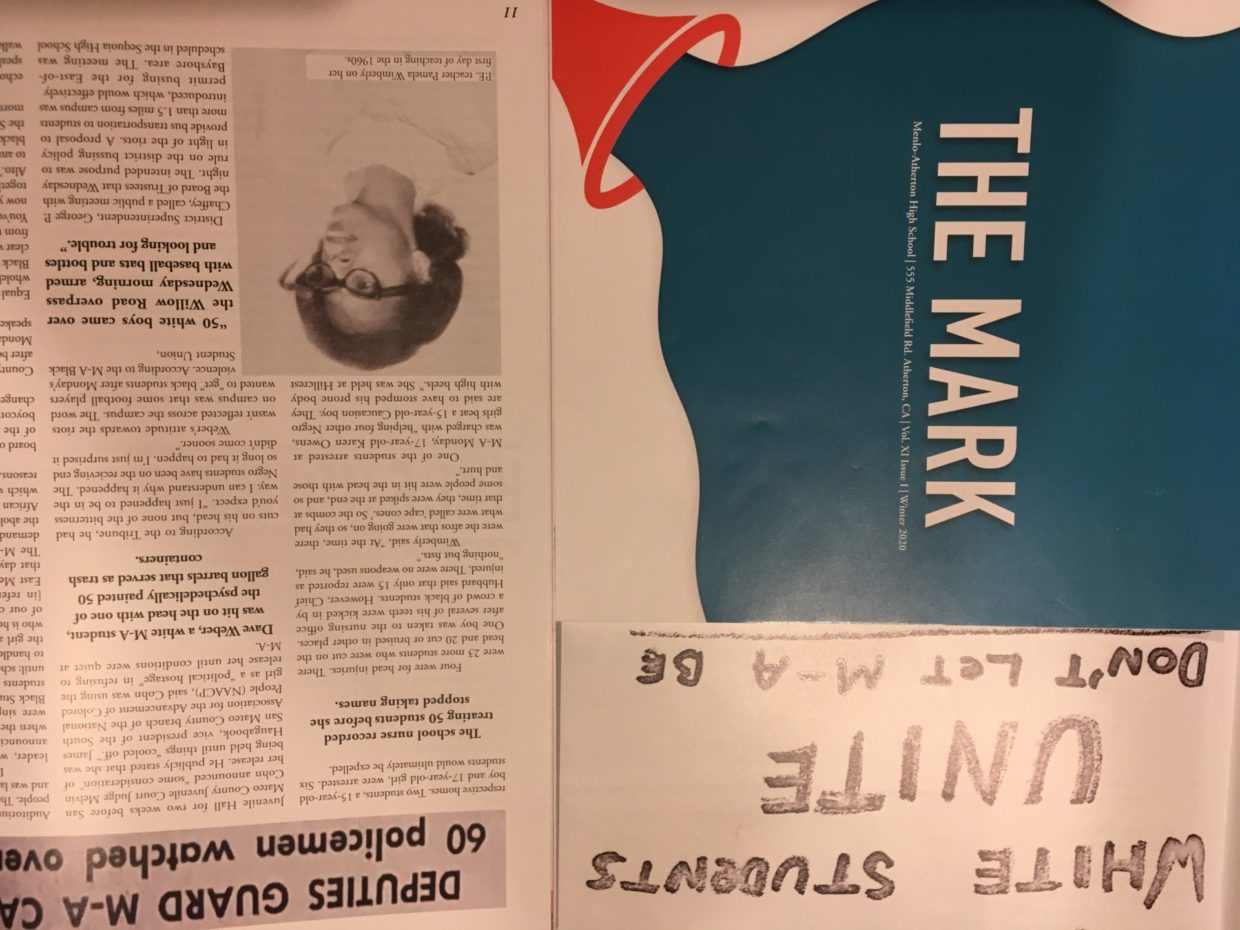 In the most recent issue of our magazine, the Mark, staff writer Alana Hartsell wrote a lengthy article that covered the race riots that occurred at Menlo-Atherton during the 1960’s. Among other primary sources included in the article was a photo of a poster circulated around M-A in the year 1967. The uncensored poster, which included the N-word, highlighted the racist views held by some on campus at the time. The poster took up an entire page within the article, with a caption in the corner saying, “Poster Circulated by M-A Students in 1967.”

Within an hour of distributing the magazine, school administrators alerted the journalism class that staff and members of the community were upset by seeing the poster. While some students and staff were offended by the use of the N-word in the magazine, the circulation of the poster without its caption on Snapchat and Nextdoor, a community message board widely used by parents, spread confusion and outrage. 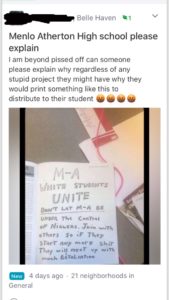 While acknowledging later in the comments section that the author had seen the poster without the much needed context, the complaint reflects the immediate reactions of some, who first experienced the shocking poster without first reading the article or understanding its context.

Meanwhile on campus, students were seen ripping out the page from the rest of the magazine, tearing out the caption in the corner; some were  hung around campus by students. Similarly, the images circulated on Snapchat did not include the caption. 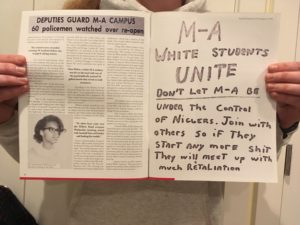 The poster is on a page adjacent to part of the article, with a photo of PE teacher Pamela Wimberly.

Principal Simone Rick-Kennel, in an email to parents and students that night, stated, “As principal of a school that strives to promote ‘Strength in Diversity’, I apologize that the presence of the flyer in the article caused harm to our community.” Kennel referred to the incident as a “learning opportunity for us as a school community to understand racial trauma and engage our students in honest conversations.” She later repeated this on M-A Today. According to Kennel, she had spoken with an anonymous African-American staff member who stated that “it [the flyer] was shocking because we’ve been there, and moved forward, we don’t need to see it in print.” However, Kennel acknowledged that reactions were mixed. According to her, a second African American staff member expressed a different view, saying that “it was not bothersome,” and that she “would like to see it become a learning opportunity for all students.”

P.E. teacher Pamela Wimberly, who was at M-A during these riots and a major focus of the article, said, “I read the article, and checked the poster, and that’s history. It’s history, and indeed it happened here. I don’t understand why some people got upset. Was it because they don’t want the history or truth to come out? I don’t understand. I look back and I remember as a kid I couldn’t sit at the front of the bus; I had to go to the water fountain that said ‘colored only.’ My friends decided they were going to go into a restaurant to eat, and I couldn’t go in the restaurant so I had to sit on the bus with the bus driver and they brought me my lunch. So, I mean, those were hard times, but I think the truth was said in the article.”

Sam Stevens, an M-A campus aid, said that he thought that the inclusion of the poster was justified. Stevens stated, “In my opinion—I can’t speak for other people—because I know what I’ve been through, coming from the days of segregation, I think it was justified. I really appreciated [the poster]—some history is being presented, and that was fine with me.” Stevens said, “When I first opened up the Mark, that was the first page I came to. Well, it enlightened me.”

According to Sarah Marks, an editor-in-chief of the magazine, “the poster was intended to inform the student body, as many on the Mark’s staff have expressed that they were previously not aware of the race riots of M-A’s history, as well as spark a meaningful discussion regarding the racial tensions of the past.” The editors spoke to numerous students and staff members and held multiple class discussions to reflect on the impact of the article.

Fellow editor-in-chief Nate Viotti said, “I wish we had made the caption larger and more immediately obvious. We put a lot of thought into the decision, discussing it at length as a staff and with community members prior to publication, but didn’t predict that some would misunderstand our intentions and the artifact’s context.”

“During the editing process, I read this article so many times and saw the poster in the context of the article so much that, at least to me, it was beyond clear that the poster was meant to be taken with the article. But I may have been desensitized to after looking at it so often,” added Marks.

Editors and journalism staff met with representatives from the Black Student Union (BSU) to facilitate a constructive discussion. While some BSU members supported the inclusion of the poster,  many wished the staff had done so in a way that had a lesser shock factor to unexpecting viewers of the poster. The BSU additionally invited representatives from the Mark to begin working together to plan an educational poster campaign on campus, which has since been suspended because of our school’s closure due to COVID-19.

The BSU’s event planner and social media specialist, Jahkim Hendrix says, “I think here we have a historical artifact, and you’re trying to do justice to the things that happened on Menlo-Atherton’s campus, and I think since some people didn’t read the magazine, it made it seem like it was all in vain, but it wasn’t.” He said, “I think it’s important that we establish that this was written in the sixties, this is a reflection of what M-A started as, and this isn’t a reflection of M-A beliefs nowadays.” Hendrix says, “it wasn’t even anything where we [the BSU] were saying that the poster was a reflection of the beliefs of The Mark; I know that’s not true.”

Another member of the BSU, Lillian Cheatham, said that “if the poster was printed smaller, or had a bigger caption, I think more people would’ve understood it.” Cheatham said at first, “I was shocked. After a while I didn’t mind. I think that some people were unnecessarily loud about it.” However, Cheatham did say “I feel like they should’ve put a border around it, and put captions inside of the picture, ‘like hey, here are some facts, and this is what happened at M-A back in the day, and look at us now, how much more diverse we are.’”

History teacher Sam Harris took the article as an opportunity to teach an impromptu lesson on the history detailed in the original article, Menlo Atherton’s Race Riots. Harris said, “That day, I did a crash course on school desegregation, Brown vs. Board of Education, Little Rock [Nine], busing in the seventies, etc. I tried to give them this history, everything that set up this article in a nutshell so that they could understand what people are talking about around campus.” Harris said he was shown the poster by one of his students, Marshawn Smith.

Smith described that he came across the poster while flipping through the magazine out of curiosity. “At first I was surprised, but you can’t judge a book by its cover until you actually read it, so I actually looked into it, and thought, ‘stuff like this happened back in the past. They’re just putting this information out there, not trying to bring back the past.’” He continued, “The poster gives me the perspective into how it was back then in 1967, and a good insight into what it was like. I think it was pretty necessary.” He stated, “If you go into it with a closed mind, wondering ‘oh why are they putting this in the school paper’ that is when you’ll have a bad outlook on it, but if you’re coming into it with an open mind, and reading it, reading the whole thing, that’s when you can have a good judgement.”

Liane Strub, a faculty member and former journalist, stated, “I think it made perfect sense to include it; I wouldn’t have made it a full page. Strub says that “as an English teacher, many of the texts that we teach use the N-word. Of course, in a classroom, where you’re reading everything together, you can contextualize it, you talk about it beforehand, you can say that you’re going to encounter this.” Strub, while supportive of the staff’s inclusion of the poster, said “the difficulty with producing something in print is that you can’t contextualize it. That’s the only thing I would critique—you need to provide the context in such a way that people who might be offended won’t be able to take it out of context.”

Lisa Otsuka suggested, “Maybe the poster could have had more context around it, because it was so large.” Otsuka continued, “I think that these are conversations we need to be having in general, on this campus, quite frankly. We have this motto [Strength in Diversity], and the way I feel about Strength in Diversity is the same way I feel about ‘All men are created equal’—the reality is … we’ve never lived up to those words, and we need to acknowledge that. I think that’s why these kinds of articles are important.”

Alan Perry, teacher of both M-A’s Race and Immigration class, as well as AP U.S. History, shared a similar sentiment. Believing that it was more of an error in formatting and implementation, Perry said, “I believe if you are going to publish a historical article, then you need to have historical documents, which obviously that poster was. The inclusion of what was in the poster, versus how it was presented in the article, are completely different things. Having it in the way it was displayed, I would not have run it that way myself.”