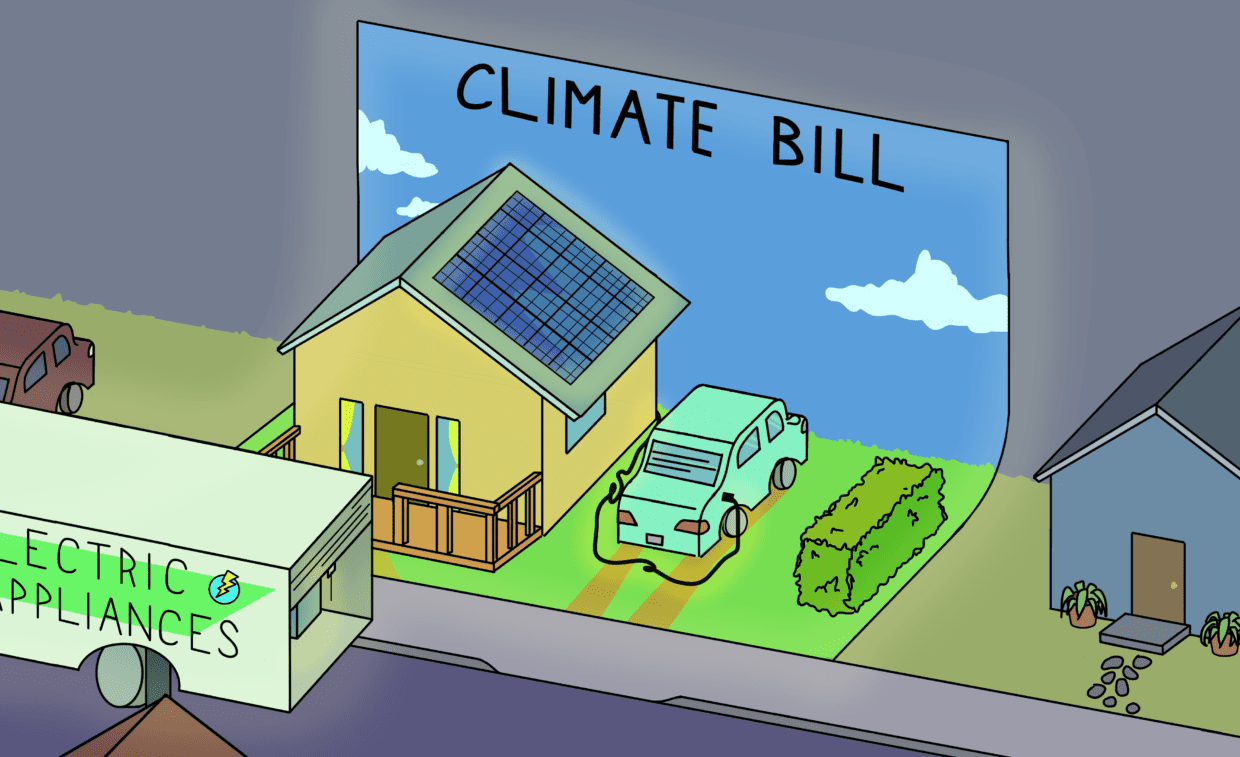 In August, Congress passed the Inflation Reduction Act, otherwise referred to as the Climate Bill. The law is the most comprehensive legislation passed to address climate change in the U.S., investing $369 billion in renewable energy, manufacturing, home energy and efficiency improvements, electric vehicles, and many more sustainability initiatives that will affect Bay Area residents and organizations.

The Climate Bill is predicted to reduce greenhouse gas emissions by about 1 billion tons per year by 2030, an important step to maintaining global temperatures under an increase of two degrees Celsius. According to a study by Drew Shindell, a lead author on the last two International Panel on Climate Change reports, the U.S. will save over $700 billion, almost twice the cost of the bill, if global temperatures are maintained under this threshold because of the reduction in early deaths and illness.

The law is also designed to create many new jobs in sustainable infrastructure. Diane Sweet, a contractor for the company EmeraldEco, who helps Bay Area residents electrify their homes, said, “The Climate Bill creates a lot of job opportunities for high school students who decide to go into the trades as well as those who move on to a four-year college.”

The Climate Bill provides up to $14,000 in subsidies per homeowner for energy efficiency upgrades. This will help Bay Area residents electrify their homes and install solar panels to provide a sustainable energy source for those homes. There are also many incentives included in the Climate Bill for purchasing EVs (electric vehicles).

These subsidies will likely have a ripple effect. By creating a greater demand for sustainable products they will encourage companies to produce more, creating even more of a demand for these products. Roopak Kandasamy, the head of sales operations at clean energy contracting firm BlocPower and Board Member at environmental nonprofit 350 Bay Area, said, “In addition to motivating consumers to electrify their homes and purchase EVs, the Climate Bill will also encourage Bay Area venture capitalists to invest more in climate technology startups.”

Many of these subsidies are geared towards lower-income communities which is important because not only will it incentivize more people to invest in sustainable alternatives, but it will also help save them money in the long run.

Diane Bailey, who works for the Menlo Park environmental nonprofit MenloSpark, said, “The average family can save around $200 a year on their energy bills by switching to more energy-efficient appliances.” Michelle Daher, the East Palo Alto Environmental Services management analyst, explained, “The subsidies for electrifying homes will be useful because if we don’t shift away from gas appliances, residents who are left on natural gas will end up having to pay what some estimate might be 500-700% higher costs for that natural gas in the future as fewer and fewer households are using it.”

One example of how these subsidies are designed for households with less resources are the rebates, or partial refunds, for EVs. Arianne Erickson, who works for the environmental nonprofit Acterra, explained, “More lower-income individuals will be able to purchase an EV because, for the first time, there’s going to be a federal tax credit for used EVs.” She said this will start to have a bigger impact in 2024 when people can take the credit after purchasing the car instead of having to wait until they pay their taxes. This will be more beneficial for people who don’t pay enough in taxes to get the full benefit of those credits or need the money right away and can’t wait several months to receive it.

Some of the subsidies won’t take effect until 2024, but those for renewable energy are effective immediately. Because of a 30% rebate on solar provided in the Climate Bill, panels that would have previously cost $6,000 to install would now cost around $4,000. Bailey said, “The tax credits for solar panels and battery energy storage will be useful when the electric grid fails as we’re seeing more extreme weather from climate change.”

Some, like Erickson, argue that one of the drawbacks of the law is its eligibility requirements for electric vehicles to qualify for subsidies. Cars like Tesla, Chevrolet, Hyundai, and Kia vehicles currently don’t qualify for the federal tax credit because the companies have either sold over 200,000 vehicles already or don’t manufacture cars in the United States. Erickson said, “The fact that the car has to be under a certain price has made some vehicles immediately not eligible. However, it’s possible that because the federal tax credit is now restricting some of these vehicles, dealers might feel pressured to lower their cost because they’ll see a sudden decrease in interest.”

Effects on Cities of Menlo Park and East Palo Alto

The Climate Bill’s provisions have also impacted local governments. Kandasamy said, “It’s important that, at a local level, we make sure that this federal funding is going to the right place. We have a lot of resources in the Bay Area, so all of the changes at the federal and state levels should encourage us to do more at the local level.”

Bailey said that the subsidies have helped Menlo Park implement measures to achieve the targets listed in their climate action plan. As an example, she explained, “We’ve been working with the Environmental Quality Commission to prevent new gas appliances from being installed in existing homes. Now that there are savings involved from taking climate measures, it’s a lot easier to get them adopted by a city council who doesn’t want to anger residents by increasing their bills.”

East Palo Alto is also using some of the funding provided in the law. Daher said, “The City of East Palo Alto is finalizing our climate action plan and when we prepare the implementation plan we’re going to be cobbling together various grants and funding opportunities.”

This funding includes the $315 million provided in the Climate Bill for air quality monitoring in lower income communities and $2.6 billion provided for ecosystem restoration. Daher explained, “We’ll benefit from the air quality monitoring because so many community members have respiratory disease issues.” She also said that the city is planning on building a levee as a barrier for sea level rise and will be able to apply for funding for the offsets.

Effects on Local Companies and Organizations

The Climate Bill has also affected both local environmental groups and companies working to help people electrify their homes, or selling appliances or EVs.

Erickson said that Acterra has been working to inform potential EV adopters about how the subsidies would apply to them. Erickson said, “It’s difficult for Acterra to help people understand the Climate Bill because there are so many different eligibility criteria that are being implemented at different times.”

The Climate Bill will also likely increase business for companies like EmeraldEco. Sweet said, “At EmeraldEco, we work with homeowners to get rid of all their gas appliances and think about renewable energy and backup battery storage. We benefit from the Climate Bill because now, with all the subsidies, electrifying your home is not out of reach, so more people will electrify their homes. A lot of the rebates will start in 2023, so I anticipate that business will increase then.”

Sweet said, “Overall, everyone is very excited. This Climate Bill has been a long time coming and it’s by far the largest and most progressive law to fight climate change, which we dearly need. Is there more that we could be doing, of course, but I want to be optimistic and focus on how much was accomplished. It covers vehicles, industry, commercial buildings, residential buildings, aviation fuels, it’s a very comprehensive bill and I think the impact on the Bay Area is going to be really important.”