“Cinco de Mayo initially started as the Battle of Puebla against France, and Mexico beat France, but it’s become more of a nationalistic holiday and a symbol of proud Mexican heritage,” explained sophomore Francisco Arias. Last Thursday, M-A students and staff celebrated Cinco de Mayo through a variety of fun lunchtime activities. The Green was flooded with students as several clubs and students participated by selling different Mexican treats and providing historical information about the event’s origins. 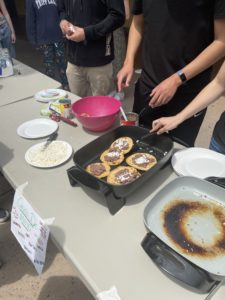 Ahza McFadden’s Latin American class prepared sopes by hand, topping them with beans and cheese. Senior Jonathan Becker explained, “we thought it would be a really cool idea since we’ve learned a lot about Mexico and wanted to participate in our own way,” 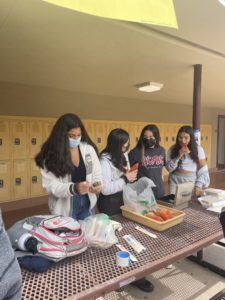 Members from AVID club sell a variety of boli flavors.

Sophomore AVID student Yaritza Elizondo said on Thursday that, “the event is going well; there are lots of people, and students seem to be enjoying it.” Elizondo spent her lunch with other AVID club members serving lines of students helados de mangoneada and bolis , two different Mexican frozen treats that are perfect for a hot day.

“As a Chicana, it’s important for me to represent the community. Even though many Latinos don’t celebrate today, we still need representation,” said senior Alejandra Lombera. As a member of the LUMA club, she helped prepare fresas con crema, which are strawberries bathed in sweet creams. She explained, “we chose to sell this because my mom would always make these for me as a kid, and it’s the same for other club members. My parents and I are originally from Jalisco, Mexico, and it’s a very popular treat there, so I wanted to bring it out here to make it special.” 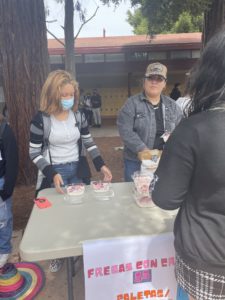 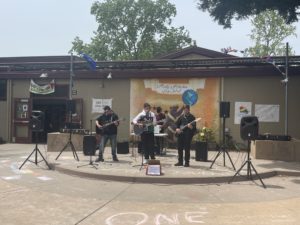 Live music surrounded the atmosphere, prompting students to dance around the Green and celebrate. Senior Juan Aburto performed a variety of Spanish songs alongside his band: when La Chona by Los Tucanes de Tijuana started playing, students flooded to the dance floor. “I love this event because it brings awareness to different cultures and helps us learn more about them. As a Spanish-speaking student, I absolutely love being able to celebrate all the different cultures on our school campus,” said Junior Toni Olivero.

Sophomore Laurel Statkiewicz agreed with Olivero, saying, “it’s been really cool to see so many different people with different backgrounds embracing their culture. I think events like these are really important in unifying our student body.”