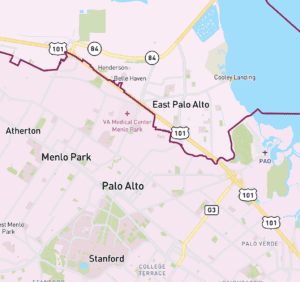 The old dividing line between the 14th and 18th congressional districts.

Every decade, every state in the U.S. redraws their congressional maps to reflect population and demographic trends over the last ten years. The House of Representatives, which is made up of 435 members, is made up of congressional districts determined by geography. States redraw their maps in different ways: some let whichever party has the majority in the state legislature control redistricting, while others give control to commissions that are either independent, bipartisan, or formed in some other way. In the past decade, California has seen a significant number of people move out of the state and as a result, has lost one electoral vote, equivalent to one seat in Congress.

The former 18th District, which includes almost all of Menlo Park, was represented by Congresswoman Anna Eshoo (Democrat-18), except for a small section of The Willows neighborhood that is already zoned for East Palo Alto (EPA) schools. For the past eight years, Congresswoman Jackie Speier (Democrat-14) has represented the 14th District, which is the area east of the US 101 freeway. With the recent redistricting, the 18th District represented by Eshoo will become the 16th district, and the 14th will become the 15th. This will include all of EPA, the Suburban Park-Lorelei Manor-Flood Park Triangle neighborhood, and parts of the Willows neighborhood. Speier announced in November that she will be retiring from Congress, meaning that the new 15th District will have an open seat. 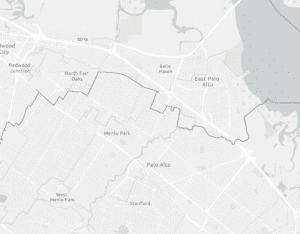 The new dividing line between the 15th and 16th congressional districts.

This means that the congressional representation for many M-A families will be changing especially as District 15’s open seat invites room for new candidates. Candidates include Assembly Member Kevin Mullin, who was recently endorsed by Jackie Speier.

The racial breakdowns of the two districts that include M-A students are as follows:

In terms of the State Senate, the M-A community will remain in one district. Similar to the congressional map, California’s Citizens Redistricting Commission’s State Assembly map also divides the M-A community by dividing EPA from Menlo Park and Atherton.

California’s congressional map after redistricting looks significantly better for Democrats than Republicans. Several districts currently represented by Republicans, like the 22nd and 27th districts in the Central Valley and the 45th in Orange County, are now more likely to elect a Democrat. That being said, with 2022 expected to be a wave year for Republicans, there is a chance that they could flip up to four currently Democrat-held seats.

The M-A community’s congressional districts will remain divided for another decade, and will become more divided than it was prior to this current redistricting process. Our community formerly was divided in terms of Menlo Park and EPA, but with the redrawing of the lines, Menlo Park residents have been divided from one another.