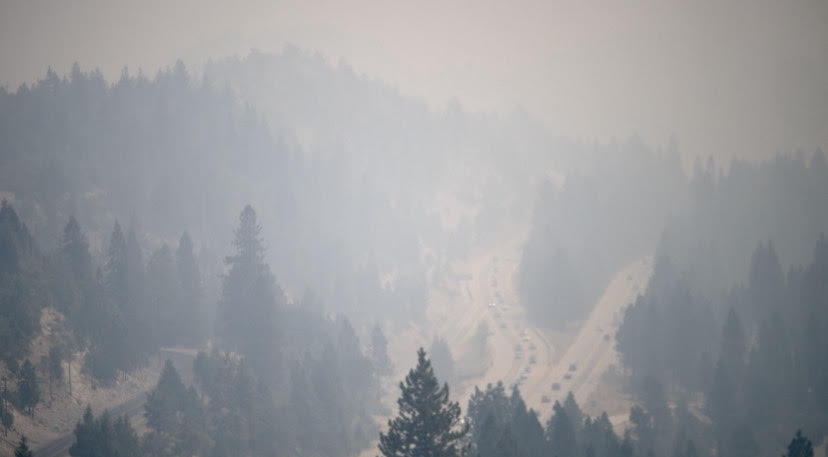 There are at least 14 wildfires that are currently roaring through California burning hundreds of thousands of acres of forest and wildlife . The Dixie Fire has burned over 700,000 acres just east of Chico according to Cal Fire, and the Caldor Fire has currently burned through over 200,000 acres in South Lake Tahoe. Within the past five years alone, the fire season has extended immensely, going from at most a month of burning to now at least three months. We spoke with Battalion Chief Dan Coyle from the Menlo Park fire station about both current and past wildfire seasons and why they occur.

When talking about California Fire Fighters current obligations in Northern California, Chief Coyle spoke about the Menlo Park Firefighters who are fighting multiple fires at the moment. “We currently have one fire engine with four people on it. And one division chief who’s in charge of an area of fires.” He continued on by saying, “We’ve been at the Dixie fire. We’ve been at the fire in Eldorado County, and that’s where all of our resources are right now. California has a very complex and robust aid system. So basically every Fire Department in the state and even some resources from out of state have come into California to help with those large fires. They’re just too big and too complex for one agency to handle, so everybody pitches in.”

According to Coyle, even with so many of our local firefighters up in NorCal, local departments still have enough to cover each station in our area and to “send another six guys in about a week.”

Throughout the conversation, Chief Coyle referenced back to the CZU Complex fire that burned about 70 thousand acres of land in both San Mateo and Santa Clara counties from August 16th to September 22nd of 2020. “I think the largest fire they had on record in San Mateo County prior to the CZU was like 1,000 acres, and this one was 70,000 acres.” Chief Coyle grew up in Belmont and attended summer school at M-A. Today he lives in Santa Rosa, an area that has been harshly affected by wildfires for years. Even with so many years of fighting fires, he said seeing such a large fire in our area was “unusual just because of the moisture recovery.” That said, moisture recovery is the reason why we see so few fires in the peninsula but so many further up in the state.

The CZU Complex and many of the fires currently burning, such as the River Complex fires that are blazing through the Trinity-Alps Wilderness just west of Redding, were started by dry lightning. While these fires start differently than brush fires or fires started by electrical lines, Chief Coyle said, “They don’t burn differently, but typically multiple small fires start at once. So as opposed to having something like a power line down or a campfire that has what we call a single point of origin, there can be multiple points of origin.” He continued on to say, “I would say that the dry lightning is different only in how it starts, they burn the same once they get going.”

Of course, one of the biggest things on every Californian’s mind is ‘when will the fire season end?’ Sadly, there is no firm answer to that question. Chief Coyle said that while he is not a climate scientist or ecologist, he does know one thing, “the situation is probably gonna get worse before it gets better.”

Being so far away from these fires has made it seem pointless to try to help those who have been affected. Nonetheless, there are still so many ways to assist from a distance. “The Red Cross, obviously, if you’re looking to support the people that may be displaced.” Chief Coyle  continued on saying, “The California fire foundation is another great benevolent organization that actually gives gift cards to displaced people, they’ll show up where the folks who are sitting in a Walmart parking lot, and we’ll give them a $250 gift card to go get diapers and formula for their babies and food, and, that kind of thing, just to help get them through that first initial phase of loss until someone like FEMA (Federal Emergency Management Agency) or somebody else shows up for disaster relief. Folks show up and start taking care of the masses. So if you’re looking for a way to help, awesome, those are two organizations I know that are directly serving people that are displaced by the fires.”

Coyle said he wanted to become a fire fighter because “It’s a very rewarding career… obviously you see a ton of really terrible things, so that can take a toll. But I wouldn’t change anything. I love my job, and I’m looking forward to keep doing it.”

For anybody interested in being a firefighter or working with emergency services, the Menlo Park Fire Department is now offering a cadet program. This program will allow you to go to the firehouse, run 24-hour shifts, and even sometimes run emergency calls. If you’re interested, go to this website to learn more about the application process.