Next year, our bell schedule is going to change. However, it’s still unclear what the changes will be.

California Senate Bill 328 (SB328) was passed in October 2019 and will finally go into effect next school year. The bill states that, as of July 1st, 2022, high school classes cannot begin before 8:30 am. By providing classes during zero period, if M-A’s schedule were to remain the same, it would “violate” the new law.

More specifically, the bill requires that all 1,080 required instructional hours must occur after 8:30 am. Currently, M-A’s instructional hours cover the hours before 8:30 due to many “core” classes, such as Biology and US History, that are offered during zero period. To meet the new requirement, zero period will likely have to become a seventh period, much like it was during the 2020-21 Distance Learning Hybrid Bell Schedule.

Initially, the school considered keeping the schedule entirely the same by simply adding zero (seventh) period to the end of the day. To students, this would sound concerning. Those taking a seventh period would end school at 4:10 on regular days, and 4:50 on block day. For students playing a sport or participating in extracurriculars, this type of schedule would make it difficult for those individuals to make it to their after-school activity on time. For this reason, M-A has decided that it will have to start school at an earlier time.

One option being considered is starting first period at 8:30 am. This would allow for sixth period to end at 2:50 pm, meaning that students would get out of school at 3:45 pm if they were taking a seventh period. However, this change isn’t without its criticisms. At the latest Shared-Decision Making Council meeting on January 27th, senior Devin Leslie said, “It’s quite ironic that a bill intended to give students additional sleep will end up costing most of them even more.” 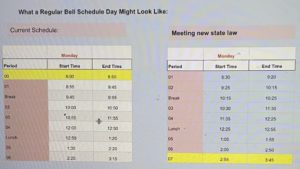 Principal Karl Losekoot noted that the school will finalize plans for next year by sending out a series of surveys. In the latest BearNotes newsletter, Losekoot said, “M-A will be surveying staff, parents and guardians, and students in the next few weeks.” As a result of this, several changes are possible beyond simply adjusting the timings of the day. For one, there may be a modified block day schedule. This would change our schedule from two to four block days per week, and the only “regular” day would be Monday. Additionally, the number or length of flex times could be subject to change next year. Decreasing the length of flex time could be used to free up time for other classes or to create time for the school day to end earlier. Ultimately, no matter what the daily schedule at M-A is next year, it won’t be the same.