Editor’s Note: On Sunday, September 25, at 7:55 p.m., Principal Kennel publicly acknowledged the threads via email and stated that “students who violate the use agreement will be disciplined accordingly.”

At 9:51 p.m. on Thursday, a group email with parody lyrics of the song “I Miss The Old Kanye ” was sent out to all freshmen, juniors, and seniors in the school concerning the late Cincinnati gorilla, Harambe, by a student.

The ensuing discussion has rapidly become vulgar or meme-centered, with many students using the format to send spam and other off-topic material, including some racially-tinged comments.

Other students shared personal information including Snapchats and phone numbers.

Examples of student comments to the original Harambe post include, “Is Harambe a dog?”, “To all the ppl hating on the memes just go to bed” (accompanied by a picture of Captain Jean-Luc Picard of Star Trek), and “We’re all going to be suspended.” Other media sent includes memes of internet comedian Filthy Frank, Harambe himself, the host of Ancient Aliens, and prominent political figures.

Additionally, at 2:11 p.m. on Friday, another chain was sent out exclusively to seniors with the title “M-A today sucks [***] just like your lifes” and appears to be inspired by the original Harambe chain. With students now aware of the all group email the likelihood of repeat spam seems likely to continue.

The AVP office was unable to be reached for comment and it is still unknown if administrators are aware of the events at this time. 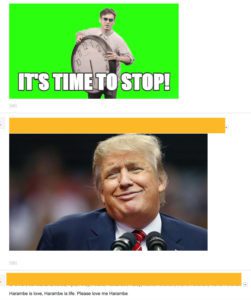 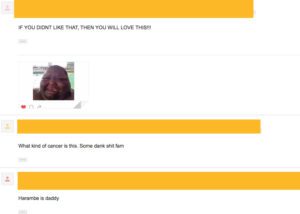