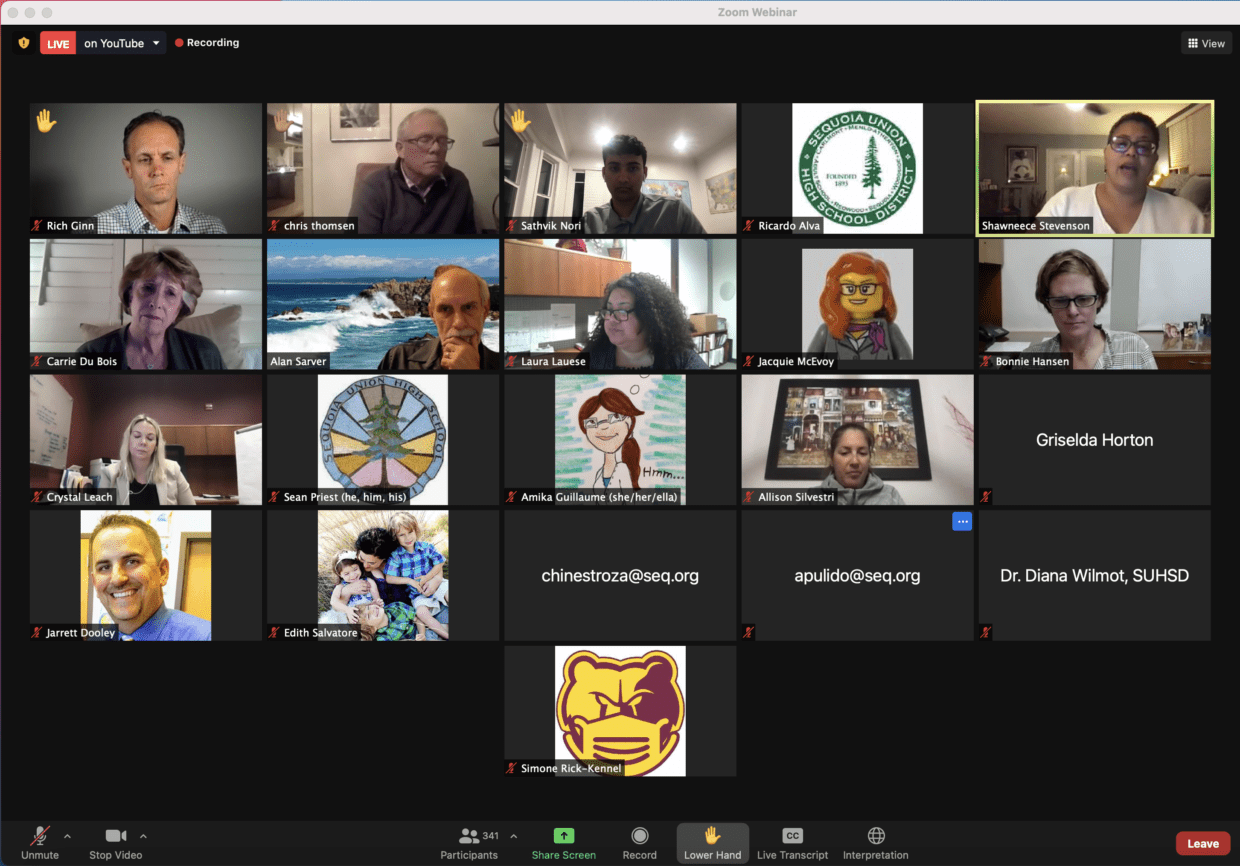 This is a developing story. Check back for updates.

On Wednesday, February 24th’s Board meeting, SUHSD Interim Superintendent Crystal Leach announced that all students who choose may return to in-person instruction on April 5th, after reaching a tentative agreement with the teachers union. Anticipating that most teachers and staff will have the opportunity to be vaccinated by the reopening date, the District plans to implement a “concurrent” learning model where students will have the option to attend class in-person with COVID restrictions or virtually. The announcement comes after Tuesday’s protest to reopen SUHSD, but also was met with contention from teachers and community members who were largely concerned about equity issues that fall along racial and socioeconomic lines.

The agreement between the Sequoia District Teachers Association (SDTA) and the District must be approved by more than 50% of the union’s members.

Teachers union president Edith Salvatore stated that coming to the agreement has been a long process, and the rhetoric has at-times gotten ugly. “Your teachers have been beaten up over this,” she said. “We are tired of being the punching bag, and it’s time for us to come together.”

According to Leach’s presentation, there will be a 25% student and faculty capacity at each school. A concrete schedule for in-person learning has not been set, and more details will be available in several weeks once the District gauges student interest and teacher availability. The April 5th return date will come after a week-long spring break. Still, the basis of the concurrent instruction plan, called “Zoomers and roomers,” is that some students will be on campus but take classes on computers, while others will watch a livestream or Zoom call from home.

Board President Alan Sarver said, “we are looking at the largest single step forward that we’ve been able to engineer over the past year.”

Several public commenters told others to “follow the science.” The CDC suggests that going back to school with masks and social distancing in the purple zone is safe. Other data also further supports this idea. In North Carolina, 11 school districts with over 90,000 students went back to in-person school in the fall of 2020. During nine weeks of this, within the school, transmissions were infrequent, where only 32 infections occurred. Moreover, there were no reported student-to-staff infections. The CDC also suggested that when social distancing and mask guidelines were followed, there were fewer covid transmissions per capita in schools versus the community as a whole.

In response, Board Trustee DuBois stated, “I have also heard that the data and the science across the country are not adequate when it comes to high school and large comprehensive high school, because older teens aren’t great at social distancing.”

Some teachers, like M-A teacher Abigail Korman, expressed discontent at being told earlier in the year that schools would not return to in-person learning until the county was in the yellow tier. The county moved to the red tier on February 24th, the same day the reopening date was announced.

In addition, many teachers and students spoke about equity concerns. With East Palo Alto, Redwood City, and North Fair Oaks being the cities with the highest infection rates in the county, many public commenters cited the statistic that while 2% of Atherton residents have been infected by the virus, 14% of EPA residents have been infected. Moreover, vaccination rates have been higher in wealthier neighborhoods. EPA Academy Teacher Marilyn Travis said, “the evidence clearly shows that there are glaring inequities within our own county that must be taken into account. The decision to return to school is not only inequitable but also racist and irresponsible.”

Allison Mok, an EPA Academy teacher, told the Board, “If there’s even one student or staff member death, their death will be on your hands.”

Board member Shawneece Steevenson, explained her vote toward the plan: “I am struggling because we basically have two different populations and we have to serve them both in ways that make sense for them.”

Still, she stated that she saw the plan as the best model to suit the community’s varieties of needs. “Blood is not on my hands. I think we are making choices with the information we have.”