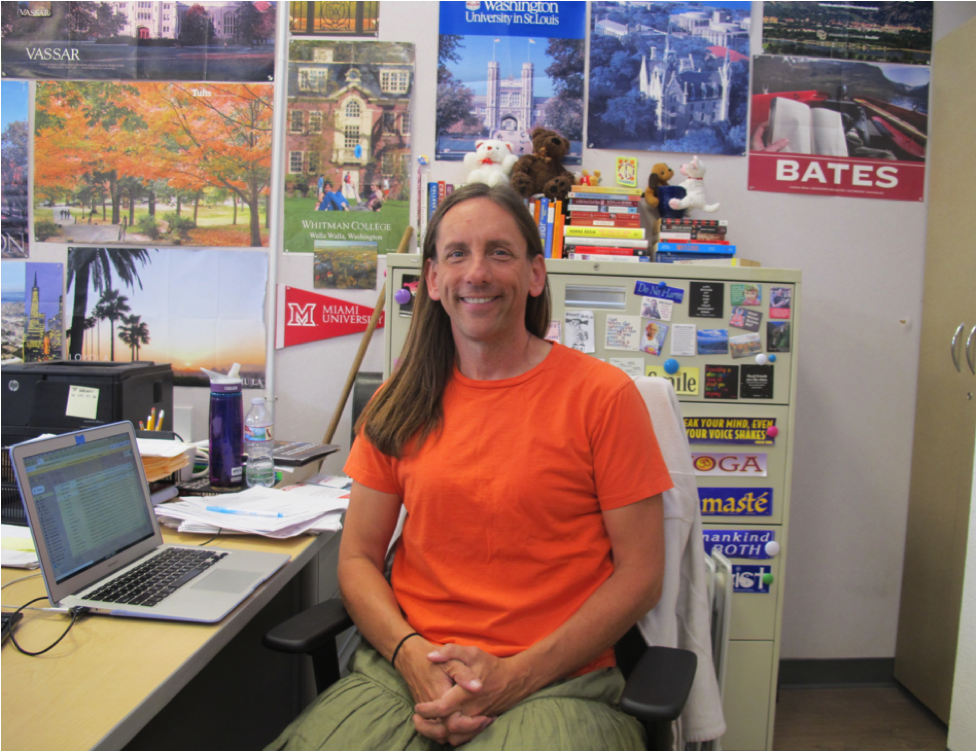 This year M-A welcomed another member to its college counseling staff. Brad Ward is working alongside Mai Lien Nguyen to guide and support students as they complete the dreaded college application process. Besides possessing a wealth of knowledge about the process and impressive experience, Ward also has an inspiring story which is important to share with the M-A community. 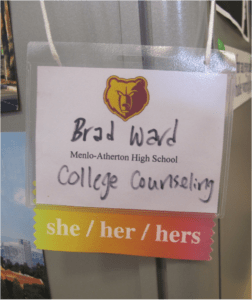 Ward has found the M-A community to be extremely accepting of her choice of gender pronouns, which she indicates on the name tag next to her desk.

Ward comes to M-A as a former college counselor at Menlo High School. She stated that the two schools are “worlds apart because they are so different in size and demographics.” Whereas Ward worked with a senior class of roughly 140 students at Menlo, she now oversees 620 students at M-A. Although Ward only meets with seniors whose last names begin with the letters L-Z, she happily offers her services to anyone stopping by the College and Career Center (CCC). Ward commented that “the energy of 2600 students is something you can’t replicate at a smaller school.” 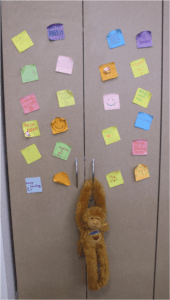 Post-it notes created by the happiness club, an organization in which Ward was involved during her time at Menlo, cover the walls behind her desk.

In addition to the larger student body, Ward noted that “demographically it’s very different” at M-A. “Here I’m working with large numbers of underrepresented populations: undocumented students, first generation, a very large LGBTQIA+ population, and a very large hispanic population – so a lot of the groups that are reflective of the real world.” Ward enjoys this part of her new job.

Ward’s skills and qualifications undoubtedly align with M-A’s history of outstanding college counseling. She has been visiting colleges for almost 15 years and has seen close to 300 different institutions. “Most of them I go to every 3 or 4 years,” Ward said. “I’m just addicted to visiting colleges. It’s a great thing to love your job. It doesn’t feel like work, even when it’s 10 o’clock at night or a weekend or a holiday. I still love it and I get up in the morning excited about my job.”

With a background in college admissions and high school counseling, Ward draws on both college and high school experiences to give the best advice to college applicants. She has noticed that high school students have a remarkable level of “energy and enthusiasm” which separates them from college students, and this is something that she thrives on. “Working at a high school, doing a job that I love, and now having almost 20 years of experience and a huge network of admissions people is the dream,” Ward stated. 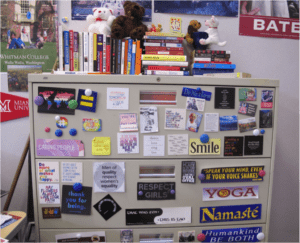 Her experience with the M-A community has been extremely positive so far. She has loved getting to know M-A students and parents and shared that “It’s wonderful seeing so many seniors come in and ask for help, because I think there’s a lot of uncertainty about this process and a lot of people think ‘this is a dumb question,’ but it’s not.”

Ward has also found the M-A community to be very accepting in regards to her selection of gender pronouns. Ward was assigned male at birth, but she identifies with she/her/hers pronouns. Rather than use her last name accompanied by a prefix, Ward prefers to be called “Brad” because “Mr. is not [her] anymore, and [she’s] not quite Ms. – that doesn’t feel right yet.” According to Ward, “the response [at M-A] has been phenomenal so far… it’s been a very inclusive and respectful environment, and people are using the pronouns that [she] indicates.”

Ward has received acceptance across the board, noting that not only students and staff but also parents and administration have been very respectful. “It was nerve wracking for me giving my first presentation a couple weeks ago to a bunch of parents, but after about five seconds I thought ‘This is nothing. This is great.’” 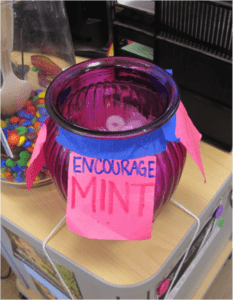 Ward offer some sweet encouragemint to students stopping by the CCC.

“It also goes up to the senior administration,” Ward said. “I interviewed for this position wearing a skirt… That morning I was still debating if I should do that or not, considering if that could get me hired or not or if that was going to be acceptable. But I knew I had to be myself, and if a school is not going to hire me because of that, that’s not a place where I want to work.”

Ward hopes that she can create an impact at M-A beyond her services as a college counselor.  She shared, “I have a message that I need to send to a lot of people: that this is ok. The truth is that half of trans teens are attempting suicide, and 40% of the overall transgender population. And a lot of that is because they don’t see a future for themselves.” Ward wants to show people that “you can get hired, you can be yourself, and it’s going to be ok. You’re going to have a big community to support you.”

When asked if she had any advice for M-A students, Ward said, “Be yourself, certainly. No matter who you are, own it, be yourself, and know that you’re going to be that much happier.” For seniors, “Know it’s going to work out. There are so many colleges out there that would be amazing fits, and even if it’s not one of the top 15 most selective universities in the country, your life is still going to work out.”

Ward’s new position seems to be an excellent fit for herself as well as the rest of M-A. “I think that this is the best career move that I have ever made in my entire life,” she shared. There is no doubt that Ward has a lot to contribute to M-A’s community as both a highly qualified and knowledgeable college counselor and as a role model for taking pride in one’s identity.