Last Tuesday night, the boys varsity lacrosse team crushed the Burlingame Cougars, winning with a final score of 16-2. This game was their seventh consecutive win this season and improved their record to 12-1. 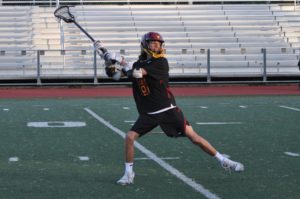 The Bears dominated the first half, scoring nine before Burlingame even scored their first one. They ended the half with an eight point lead. The Bears came out even stronger in the second half, scoring an additional six goals. Stellar defense from Seniors Max Balogh and Jeramy Koren led the Bears to a second-half shutout, allowing just two goals for Burlingame throughout the night. 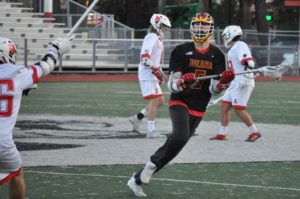 Leading scorer Lohman said, “We went into the game knowing we had to take care of business, and we did just that.”

Balogh credited the Bears’ success to teamwork, saying, “The boys have made great leaps in the past few weeks by executing their plays and even going a little off book.”

However, Balogh is still hungry for more competition,saying, “This game was nothing. I’d be disappointed if we won by single digits.”

The Bears look to carry their momentum into their next game against their toughest opponent yet, Los Gatos (9-4) on 4/21.