In Wednesday night’s game, the boy’s basketball team put up a tough fight against the Carlmont Scots but ultimately fell short. The game started slow for the Bears as they missed all of their shots in the first six minutes of the game. On the other hand, Carlmont was making most of their shots, creating a 9-0 lead over the bears in the first quarter. M-A continued to attempt to score and even decreased the Scots lead to 14-8 at the end of the first quarter. Senior A’marion McCoy and junior Ryan Anderson each had some layups, allowing M-A to begin to catch up to the Scots. 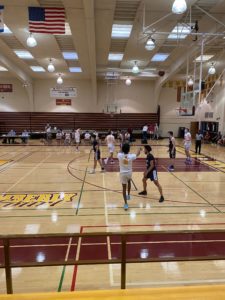 “The run in the third quarter was the highlight of the game,” said Junior JJ Discher. As the third quarter became intense, the Bears were getting offensive and defensive rebounds, making more shots than before. The crowd started to get rowdier and raised the energy in the gym, simulating the energy from games before the pandemic. The Bears seemed to feed off that energy, as they came back and even took the lead with a three-pointer from junior Ryan Anderson to make the score 32-30 with 2 minutes left in the third. However, the Scots then came down the court and tied up the score before the end of the third.

By the fourth quarter, the bears were ready to put up a strong fight. Unfortunately, the Scots kept making three-pointers and beat M-A 46-43. McCoy and others expressed their frustration over the game and the need for better focus and teamwork next game. “We need to take the games more seriously and also work on our free throws, we aren’t shooting well as a team.”

Annie Wagner is a senior at M-A this year. She enjoys reporting on sports and interesting things going on in and around her community. In her free time, you can find Annie hanging out with friends, running track and shopping.