After beating Archbishop Mitty 9-4 on March 8th and Serra 9-1 last Saturday, the Bears went into their first PAL match against Sacred Heart Prep red hot. The Bears defeated SHP 7-4 on Wednesday night to start off league play. After this win, the Bears stay undefeated on the season at 5-0. 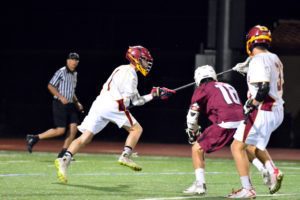 SHP came out firing with a goal in the opening minute of the game to get an early advantage. Then the Bears came right back with two goals of there own both scored by Andrew Ojeda to give them the lead for the first time. SHP got a goal back to tie the game at two. The Bears and the Gators both scored one more goal each to go into halftime tied at three a piece.
The third quarter was tightly contested throughout with goalie Cooper Waymire and the Bears defense holding strong and keeping the Gators from scoring. After a scoreless third quarter, the Bears went into the final quarter still tied at three. 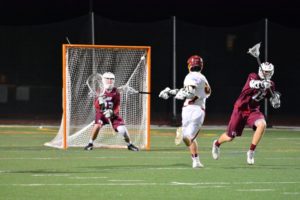 Senior Jack Wolfe whips a shot past the SHP goalkeeper for a goal. Credit: Margaret Kim

The fourth quarter started out similar to the third with both defenses playing well. Then a shot by Jack Hansen found the back of the net to give the Bears a one goal advantage early in the quarter. This sparked a series of goals by the Bears including goals from Jack Wolfe and Michael Stark to give the Bears a 7-3 lead. The Gators scored a late goal to cut the deficit to three but it was not enough and the Bears got an impressive home victory by a final score of 7-4.