The M-A varsity boys basketball team got back to winning ways with a blowout victory over struggling Woodside High School Friday night. After a three-game skid, the Bears were able to get back to a winning record in league with this performance. This takes the Bears to an overall record of 11-7 and a league record of 4-3 which puts them in a tie for third place with San Mateo High School.

The Bears kept the momentum in the second quarter that they built in the first by creating turnovers and turning them into easy points on the offensive end. The Bears only let up ten points in the whole quarter and opened up a 24 point lead going into the halftime break. 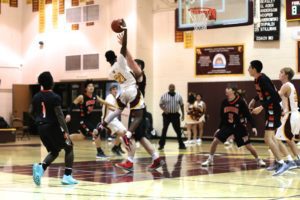 Sophomore Justin Anderson looks for a pass while driving to the hoop. Credit: Tracy McLaughlin.

The effort and energy on both ends of the quarter didn’t stop in the third quarter. The Bears’ speed and athleticism were too much for the Wildcats who were not able to handle the pressure that the Bears were putting on all night. Sophomore Justin Anderson was a dominating presence and junior Will Beasley was able to dominate the paint early in the second half. The Bears entered the final quarter with a commanding 63-34 lead.

The Bears did not slow down in the fourth and kept extending their lead. With the Bears in control, the team was able to play all their bench players throughout the fourth quarter. Each one of them held their own with energy on the defensive end and were able to knock down shots as well. When it was all said and done the Bears were victorious 82-41.

The Bears next league matchup is against Capuchino High School on Wednesday where they look to build momentum as their season nears its completion.