The bike racks at La Entrada. These bike racks, which do not allow for the frame to be locked, are less secure. Despite this, many Menlo Park schools still use them past the deadline given for implementing better racks.

The Development Plan also details design standards for bike lanes, signage, and bike parking. For instance, it orders that, “Buildings with existing traditional-type racks which support only one wheel shall have two years from the effective date of this section to replace them with conforming racks.” These “traditional racks”, which only allow for locking the front wheel of a bike as opposed to the frame, are still in use today at many elementary and middle schools, including Hillview, Oak Knoll, La Entrada, and Las Lomitas. 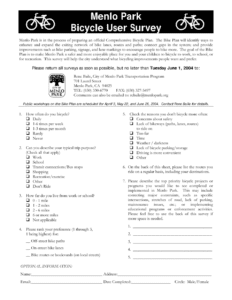 The survey was given out to Menlo Park bikers in 2004.

The end of the document provides bikers’ answers to a May 2004 survey. Part of this survey asked respondents to answer which bicycle projects were their top priorities. Alta Planning + Design, an engineering consultant in Oakland, compiled these results into a list of 33 suggestions for biking improvements in Menlo Park.

Here are some of the completed, partially completed, and in-progress suggestions:

Suggestion 6: Coleman Avenue needs to be made safer for cyclists and walkers.

Residents have long recognized that Coleman Avenue is one of the most dangerous areas to bike on in Menlo Park: a survey in the Menlo Park 2020 Transportation Master Plan asked, “Is there anything else you’d like to add about your experience biking in Menlo Park?” One respondent answered, “It is not worth the risk to my young son’s life or health to attempt to bike along Coleman any longer.” Another responded, “Coleman Avenue is a disaster waiting to happen for bikers. Sooner or later a kid will get killed, and then everyone will wonder why nothing has been done.”

As a result, San Mateo County is conducting a series of studies to determine the best way to improve transportation on both Coleman and Ringwood Avenue. These studies should wrap up by fall 2023, at which point the city can look towards implementing changes.

Suggestion 23: Safe bike routes through and to downtown and to city center. Need for bike/pedestrian tunnels under rail tracks.

Currently, there are very few ways to cross the Caltrain tracks, leaving East Menlo Park largely separated from downtown. In July, Representative Anna Eshoo secured funding for a bike tunnel under the Caltrain tracks on Middle Avenue, which will hopefully provide a better connection.

Oak Grove Avenue is one of the most popular routes for students biking to M-A. In 2016-17, the city added bike lanes to Oak Grove from Crane Street to Rebecca Lane (the Atherton city limit). However, there is no bike lane on Oak Grove from University Avenue to Crane Street, which forces bikes and cars to share the road.

Additionally, once Oak Grove crosses into Atherton, the layout of the road redirects bikes onto the sidewalk. Given that this is right next to M-A, there are always many pedestrians walking to school, forcing bikers to weave around them. Oak Grove remains as one of the most dangerous roads for bikers, and a student was hit by a car on Oak Grove in October.

In 2016, Menlo Park added parking for 86 bikes downtown in three different shapes: the standard “U,” a bike-shaped rack, and a Menlo Park gate. While no bike storage lockers have been added, these racks give bikers a designated area to park their bikes, instead of being forced to tie them to poles or in other unwieldy locations. Despite some of these suggestions having been completed, many more have yet to be implemented, some of which would make Menlo Park biking much safer. For instance:

The Development Plan details three different classes of bike routes. Class I Bike Routes are paved paths/roads specifically for bikes which do not have to be shared with cars. Class II Bike Routes are traditional bike lanes alongside streets. Class III Bike Routes are specially-designated routes, such as on Middle Avenue, which are shared between bikes and pedestrians or cars.

Of these, Class I routes are the safest, putting bikes out of reach of cars. Despite this, Menlo Park has very few Class I routes, with the most popular routes to schools taking students on Class II routes. Adding more Class I routes would dramatically improve the safety for student bikers.

Despite it being one of the largest streets in Menlo Park, as well as having been repaved sometime between 2011 and 2013, El Camino has remained without bike lanes. Without bike lanes, traveling from Menlo Park to other cities such as Redwood City is much harder, as there is no direct route on a main road. A map from 2020 displaying current bike routes as well as planned expansions.

Adrian Deutscher-Bishop is a senior at M-A this year. He enjoys writing about everyday occurrences at M-A as well as satire. In his free time, Adrian acts, stargazes, and makes graphs.