Beyond High School: An Alternative Path

The emphasis on trade school is far less than that of a conventional path at a four-year university.
In general, vocational education is less common during high school and beyond. According to the National Education Association, “High school graduates have been taking fewer credits in vocational education since 1990, but they are taking more academic credits during the same time span… While the nation has been emphasizing the importance of students getting college degrees, it is equally important to develop policies to provide more high-quality vocational education in high schools given that more than two-thirds of the jobs in the nation do not require a Bachelor’s degree.”

There is a common misconception among high school students that their only options are college or working. Many do not realize that trade school and other alternative paths are viable options for after high school. KQED News stated that “There are plenty of arguments about why higher education isn’t right for every student and myriad ideas about how young adults could productively spend time exploring their passions.”Many choose to take as many academic courses as they can without even entertaining the possibility that they might really enjoy other vocational-based classes, such as

Many choose to take as many academic courses as they can without even entertaining the possibility that they might really enjoy other vocational-based classes, such as woodshop. Of course, academic classes are important, but students could benefit by being more open to taking programs or classes that center around different paths for after high school.

I interviewed M-A senior Chris Crevelt about his plans for trade school and a career as a farrier. 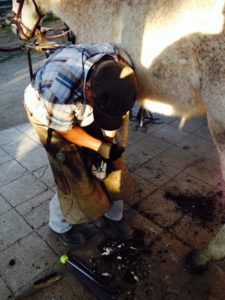 Nathalie Camens: Can you tell us a little about your plans for your education and career?

Chris Crevelt: I plan on studying the Farrier trade (horse shoeing) at Olds College in Canada, which is a year-long program. After that, I plan on teaming up with another farrier since it’s easier as a two man job and from there. That’s how I plan on making my living.

NC: How did you decide that you wanted to pursue this career?

CC: I love nothing more than working with my hands and I had apprenticed a couple farriers before. I hadn’t thought much about college or a set career till my dad mentioned the farrier programs that some schools had.

NC: What is your opinion about going to a traditional four-year college?

CC: I think they’re great if that’s what you are looking for. I just wish high schools would make other options such as trade schools more apparent so that people at least know all their options.

NC: How do you define success?

CC: I see success as taking a moment to pause and look around at all aspects of your life and being happy with what you see.

NC: How has the decision to pursue this career path affected the classes you have chosen to take in high school?

CC: It hasn’t affected my high school class choices a whole lot, but I do a lot of stuff outside school such as 4-H and apprenticeships to horseshoers.

NC: What suggestions do you have for those who want to pursue a career that is seen as an alternative or non-traditional path?

CC: A suggestion I have would be to let as many people as possible know your interest in something non-traditional and perhaps you’ll find a connection, this could aid you in getting a taste of what you’re interested in before you fully commit to anything.

“I see success as taking a moment to pause and look around at all aspects of your life and being happy with what you see.” -Crevelt

NC: Did your family always support your aspirations?

CC: My parents were always really supportive of me, they were the ones who told me about schools that offered the trade I’m interested in.

NC: What is your favorite part about doing what you do?

CC: My favorite part is the medical good that farriers do for horses feet, it’s really nice working with horses who
are lame so they can get proper treatment.

NC: How long have you known that this is what you want to do with your life?

NC: Who inspired you to pursue this career?

CC: I think it’s pretty cool to have a fairly unique skill set and just hard work is appealing to me plus the pay is not so bad either.