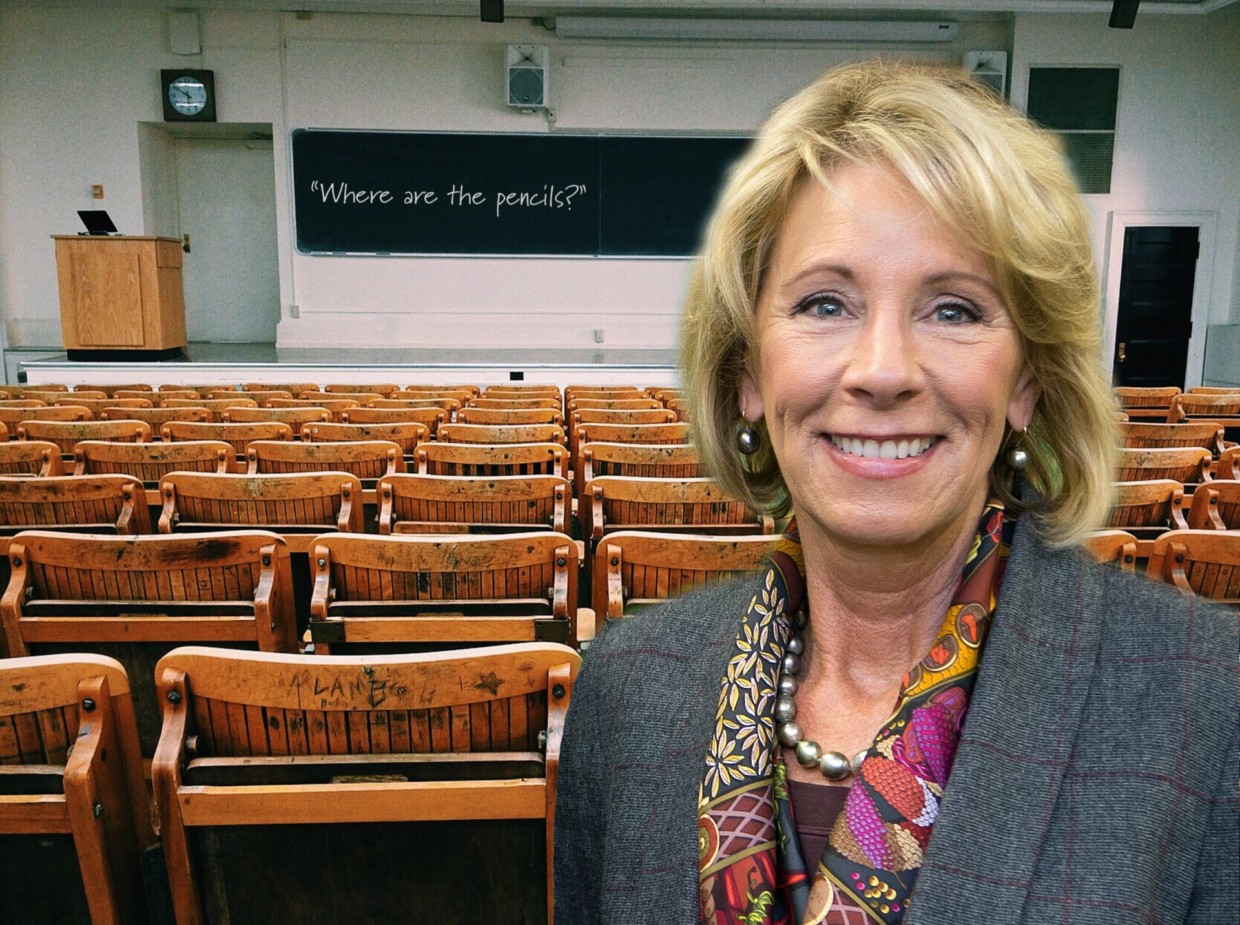 On February 6, President Trump confirmed Betsy DeVos as Education Secretary. Vice President Mike Pence made history by breaking the first Senate tie for a Cabinet position in favor of DeVos.

DeVos, a member of the Republican Party, is known for being a multi-billionaire, businesswoman, philanthropist and a donor to political campaigns. However, her lack of basic qualifications to be the Education Secretary in addition to her stances on K-12 schooling and vague policy proposals (or lack thereof) are frightening when considering the American education system. So why was she chosen as a member of Trump’s cabinet? Potentially, her $200 million contribution to the Republican Party.

Our Education Secretary’s opinions on school choice, voucher programs, and religion in K-12 schools as well as her passivity in regarding higher education issues display the fatal flaws in our education system, but also illuminate the larger issues that consume our nation: the privilege tied to wealth and the growing intolerance for minorities.

Concerning Devos’s responsibilities in higher education, Elizabeth Warren, a Democratic Senator from Massachusetts, explained, “The Secretary of Education is essentially responsible for managing a trillion dollar student loan bank and distributing 30 billion dollars in pell grants to students each year. The financial futures of an entire generation of young people depend on your department getting that right.”

Warren’s questioning revealed that DeVos has never had direct experience in managing or overseeing a billion-dollar loan program, let alone a trillion-dollar program such as the federal government’s student loan bank; in addition, she has no personal experience with college financial aid or management of higher education which reduces her ability to empathize with the problems millions of Americans face today. This only makes DeVos less likely to bring about change by acting on these financial problems.

Additionally, DeVos provided only vague ideas as to how she would combat waste, fraud, and abuse at for-profit colleges, stating she would “work diligently” to prevent corruption in the future.

DeVos failed to provide proactive policy suggestions, and she could not even ensure her team would enforce the waste, fraud, and abuse preventative policies in the status quo. What makes this response extremely worrying is President’s Trump’s fake university scandal; Trump University, a for-profit college, faced fraud allegations, and the President was later forced to pay $25 million to students he cheated. This issue and DeVos’s reaction reflects the pit of corruption and low moral standard our country is stuck in today. DeVos will only perpetuate the problems created by our nation’s leader and proves to have no capability to improve higher education. 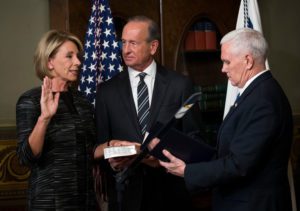 DeVos is a strong advocate for a Christian-based curriculum in K-12 schools, an obvious problem for the tens of millions of students in the U.S. who aren’t Christian.While her ideas for a Christian-based curriculum most likely will not be passed, the fact that our Education Secretary is valuing her religious beliefs over those of millions of American students further illuminates our country’s disregard for minority groups, and promotes religious discrimination toward any group that is not Christian.

When questioned by Democratic Senator of Virginia Tim Kaine at her confirmation hearing, DeVos explained she would not hold all K-12 schools (whether public, public charter, or private) which receive federal funding to an equal accountability standard. School accountability allows the state and federal governments to measure students at an equal standard through testing to determine which schools or regions need help in certain subjects. Without holding school to the same accountability standard, there is no way to effectively eliminate variables to measure schools, and thus, it is difficult to improve education quality, particularly in public schools.

In addition, DeVos is a strong advocate for school choice, a program which allows families to choose an alternative to public schools. While the concept itself is not inherently bad, the program in action has only caused harm as it makes it easier to ignore the fact that our public schools need development. According to the Pew Research Center, the U.S. is lagging behind countries on a nationwide scale where “among the 34 members of the Organization for Economic Cooperation and Development… the U.S. ranked 27th in math and 20th in science.” 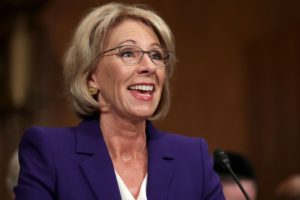 Concerning the Individuals with Disabilities Education Act, Kaine asked DeVos if schools receiving federal funding (whether public, public charter, or private) would be required to meet the conditions of the act; to this, DeVos stated she would leave the decision to the states despite it being a federal law. Kaine responded, “Some states might be good to kids with disabilities, and other states might not be so good and then what, people can just move around the country if they don’t like how their kids are being treated.”

Families of children with disabilities face a difficult enough time finding quality, affordable education, and DeVos’s refusal to support this critical act poses major threats to these families and the development of future education for disabled students.

Kaine proceeded to his final question: “Should all K-12 schools receiving governmental funding be required to report the same information regarding instances of harassment, discipline, or bullying if they receive federal funding?”

This is a huge issue because of the prevalence of bullying and unreasonable student searches in addition to the growth of cyber-bullying in recent years. If our Education Secretary undermines these issues and refuses to take action, these problems will only be exacerbated, and the well-being of students nationwide will deteriorate.

What does this mean for us as M-A students?

If Betsy DeVos’s beliefs on issues in our education system are actually passed as policies, we as students attending a public high school will especially suffer. Our education system, which already lags in comparison to the rest of the world, will be brought to its knees with new curricula that undermine a basic principle our nation was founded on — freedom of religion. Our friends with disabilities will receive fewer opportunities to grow as a students and connect with their community. Public, public charter, and private schools that receive federal funds will not be held to an equal level of accountability.

DeVos has already written the Chief State School Officer stating that school accountability will be delayed until policies are reviewed. The quality of our learning will be sacrificed so that wealthy Americans can reap more privileges. Our education and values are deteriorating because an unqualified billionaire was elected Education Secretary and believes this is all fair. The groups which need support from DeVos, such as children with disabilities, poor families, and public school teachers, are the very groups who will suffer under the management of our new leader in education.