On Friday night, the Bears fell to the Half Moon Bay Cougars in their first league match of the Bay Division, the first league loss in five years. The Bears, playing without 5-star wide receiver Jurrion Dickey—who is out indefinitely with an injury —came into the game hungry for blood following two consecutive losses.

The Cougars started off strong, scoring 15 points early in the first quarter, with an unusual two point conversion after their first touchdown, compared to the normal point after touchdown kick. M-A bounced back, with star senior running back Sherrod Smith completing a 78-yard touchdown run with four minutes left in the quarter. 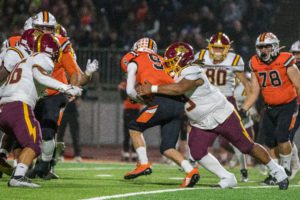 “Rod has been extremely beneficial in the last few games,” said Junior and running back Jordan Masuisui.

Early in the second quarter, Masuisui secured the Bears another touchdown, with his own 13-yard run after trucking a Cougar defender.

The third quarter started with the Cougars up 15-14. With 5:30 left in the quarter, quarterback Billy Johnson completed a 20-yard pass to receiver Johno Price, and then Smith put the Bears in the lead with another touchdown.

Going into the 4th quarter, the Bears were up 21-15 with three unanswered touchdowns, when the Cougars finally responded with a touchdown early in the quarter to make it a 22-21 deficit for the Bears. Later Smith said that M-A did not underestimate Half Moon Bay, “we just didn’t play well at all and still only lost by one point.”

Referees then called senior wide receiver Kam Hawkins’ 50-yard onside kick return back due to a penalty on the Bears. The Cougars then recovered a fumble by Smith at the Bears’ 40-yard line, lowering the spirits on the M-A sideline.

Despite all the setbacks, with 3:47 left in the game, Senior lineman David Tangilanu blocked a field goal attempt by the Cougars to keep the Bears in the game, and with another 17-yard Johnson-Price connection, the Bears were at the Cougar 6-yard line with 1:35 left, senior Dash Franklin, M-A’s star kicker, was all set up to make a game winning field goal.

Unfortunately, three penalties and an 18-yard sack by the Cougars took the Bears out of Franklin’s range. With the clock ticking down, Johnson threw a last-second fourth-down heave that the Cougars knocked down at the goal line, ending the game 22-21 in favor of the Cougars. 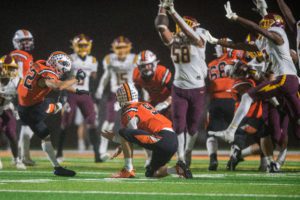 Senior and offensive lineman Soane Faasolo added, “It was a tough loss, it was almost the same situation as Wilcox. There’s a lot of things we could have done differently, but that’s the game of football.”

Despite the loss, Faasolo and Franklin were both optimistic about next week, when the Bears travel to face the Burlingame Panthers on Friday.