Bears leave more to be desired in home opener versus Bellarmine

On Friday night, after a fourth quarter comeback led by Bellarmine running back Austin Ajiake, the Bears were left speechless as the triumphant Bells celebrated on Coach Parks Field.

Bellarmine’s Ajiake rushed for 177 yards and three touchdowns, two of them in the last eight minutes of the fourth quarter. Ajiake was too much for the Bears’ highly touted defense, leading Bellarmine to avenge their loss to M-A last season in the semifinals of the Central Coast Section (CCS) playoffs.

M-A came to play early, as on the opening kickoff, senior Nick Anderson sprinted past Bellarmine returning the kick for a 98-yard touchdown. Spencer Corona made the point after touchdown (PAT) and M-A took an early 7-0 lead. However, Bellarmine was quick to respond with Ajiake busting out for a 46-yard touchdown. M-A ended the half with a 43-yard field goal giving M-A the 10-7 lead. 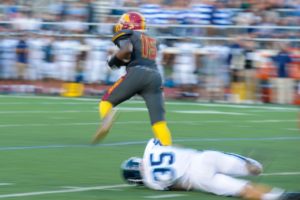 Anderson blurs past Bellarmine defenders on the opening kickoff.

M-A again came out firing early in the second half as senior quarterback Miles Conrad hit freshman wide receiver Troy Franklin for a 57-yard pass and run; Franklin fumbled the ball falling out of bounce which was eventually recovered by junior Joey Olhausen in the end zone. After a missed PAT, M-A led 16-7 and carried the lead through the rest of the third and late into the fourth quarter.

With 7:48 left in the game Bellarmine’s Ajiake started to gain momentum, taking a 22-yard run for a touchdown. M-A got the ball back and on a third down and long Bellarmine’s Harry Mingrone intercepted a tipped pass giving Bellarmine field position and time to take the lead. Ajiake then pounded the ball down the field converting on a fourth and one and then scoring his third touchdown of the day to put Bellarmine up 21-16. 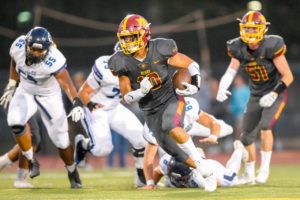 Senior transfer Kilifi Leaaetoa was impressive in his M-A debut, playing both running back and outside linebacker.

Senior defensive back Gary Carter said, “We had trouble reading our assignments and getting the right keys to the game late against Bell.” He continued, “First game jitters, we’ll get it, this week we are going to put our heads into the game and get deep into film to get ready to beat another WCAL team”.

Conrad got one more chance to put the Bears ahead with two minutes to go in the game. He connected again with freshman standout Troy Franklin for a 29-yard fourth down pass. Then Anderson received a post over the middle for 30-yards putting the Bears inside the 15 with time dwindling. Conrad took one last shot to Franklin on a fade route in the corner of the end zone, but it fell incomplete and the Bears turned the ball over on downs with 0.2 seconds left, effectively sealing a 21-16 loss. 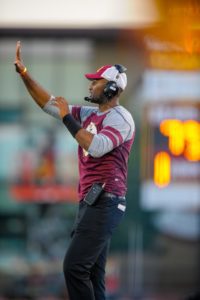 The Bears started 0-2 last year and then proceeded to win 12 straight.

Senior captain Corona said: “We are going to learn from this loss, we are going to watch film and figure out how we will get better in order to prepare for Mitty”.

The Bears will hopefully get their starting safety, Darius Gibson, back next week who did not play.

M-A falls to 0-1 on the season but has another shot at a WCAL (West Catholic Athletic League) appointment on Friday, September 1 when they take on 0-1 Archbishop Mitty in a home game at Coach Parks Field.