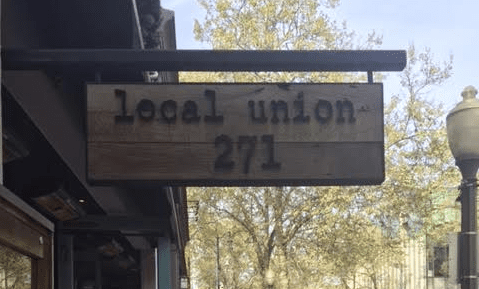 Jasper:
We found Local Union 271, a proudly family owned restaurant in the heart of Palo Alto, standing out on a bustling University Avenue by virtue of its bold wooden sign. Black letters burnt onto an oaken background shone as Ben and I walked along University, awkwardly dodging the creepy telepresence robots that advanced towards us. I never know what to do when I pass the store on University that sells the robots — which are basically webcams and monitors mounted on disturbingly fast Segways — because the salespeople they have driving the robots are a lot more aggressive than they should be. It feels rude to ignore them, but once I stopped to answer their question and they promptly surrounded me like an army of telecommuting mall cops, nudging me angrily as I backed away. This time, luckily, segueing (I crack myself up sometimes) into the actual restaurant required nothing more than a brisk pace and an equally brisk nod at the robots.
Local Union 271 boasts one of the prettiest dining areas I’ve seen yet in my long and storied career as a Bear Bites writer (and also as a person who likes food). An airy hall brightly lit by natural light lent an impossibly open atmosphere to the restaurant, a huge difference from some of the crowded, even cramped restaurants on University. When we approached the restaurant, we were quickly greeted by a waiter and a dilemma: whether to eat outside and enjoy the fading afternoon sun or to go inside and not be cold. We chose the latter, weak Californians that we were. 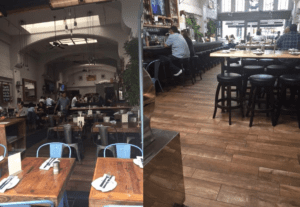 Ben:
Upon deciding to enjoy our meal inside the restaurant, we were seated at a small, wooden table near the front of the room, close enough to the outdoors to enjoy the chatter of the outside world while still subject to the comfortable indoor climate. We took a moment to stare in awe at the menu which, while extensive, contained multitudes of equally appetizing options from soups to salads to sandwiches, not to mention a laundry list of beverages on the back. We were so distracted that by the time our waiter had come over a few minutes later we realized we hadn’t even considered our entrees. Jasper and I are similar in many ways when it comes to food. Primarily regarding our appetites and favorite foods (Hint: huge appetites, tons of junk food), so naturally we gravitated to the two most calorie-dense and hearty items we could find — Mary’s Organic Fried Chicken and Waffles for me and a BBQ Brisket Sandwich for Jasper. Additionally, we couldn’t resist ordering a small plate of bacon-topped deviled eggs to split and two fresh lemonades to wash it all down. 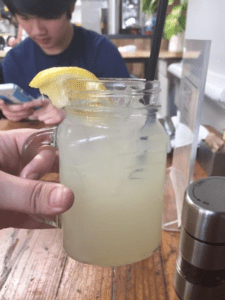 Our food came promptly, sometime between ten and twenty minutes after ordering, and it looked so delicious that both Jasper and I could hardly resist digging in right off the bat — unfortunately, photos always come first. Luckily, as the designated photographer (Between the two of us, I’m slightly less lazy and a marginally less awful photographer), I was untalented enough to get away with taking mediocre iPhone photos without giving much of a second thought to framing, lighting, or any of the other things that people who can actually use a camera understand. I had already guzzled down my lemonade once (which was served in a mason jar by the way, Oh how I love California), but the waiter had promptly refilled my glass (jar?) and, after coating every nook and cranny of my waffle with butter and pouring excessive amounts of maple syrup over the entire creation, I voraciously began stuffing my face. 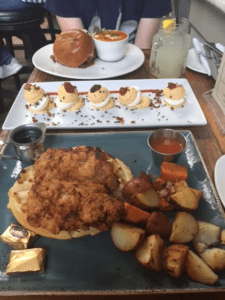 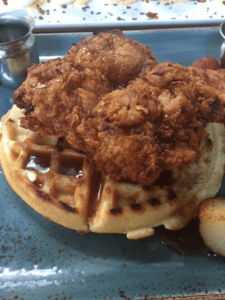 When it comes to true American comfort food like my chicken and waffles, there’s not much to say; usually, your mouth is stuffed too full of generous forkfuls of food to really ponder over any particular flavors. In this way, I think my review of my meal would be best summed up through the muffled “Oh my God”s and “Wow”s I mumbled to myself through mouthfuls of delicious food. While the side of roasted potatoes and vegetables were amazing in their own right (You can’t go wrong with potatoes, I always say), the chicken and waffles themselves overshadowed everything. It’s uncanny how two so seemingly different foods in fried chicken and waffles can work so well together, but they just do. The difficulty of finding high-quality fried chicken in the Bay Area makes it easy to forget how good a well-made piece of fried chicken taste. However, the texture, freshness, and juiciness of the chicken that came with my waffles were both a refreshing surprise and a mouthwatering meal. 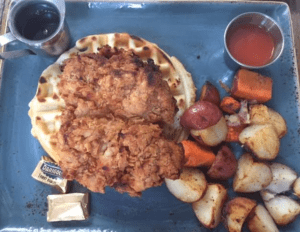 Eventually, I turned my focus towards the appetizing plate of deviled eggs that lay between Jasper and me, heaped with enormous piles of the mustardy filling and sprinkled with bacon bits. After figuring out how to hold them without spilling glops of egg all over our clothes, we toasted (you can toast with eggs right) and devoured them. The filling, while generously piled on, was actually quite light and burst with tons of fresh flavors that went above and beyond my expectations. It was a massive meal, and after all was said and done two of the original five eggs remained (Jasper had two), and we took the rest home. 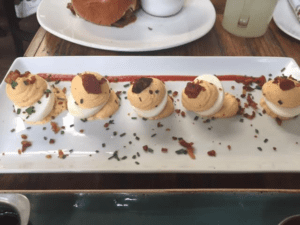 Jasper:
When our food arrived, I wasn’t sure whether to promptly dive in or to spend a couple of seconds basking in the smell of my brisket [email protected] Ben, as the responsible one (relatively speaking), held me back for several seconds as he snapped the nigh-professional quality photos for which the Bear Bites column is known. When he stopped, I started.

The brisket was advertised as being smoked for 18 hours, and I have to say, it tasted like it was. My sandwich was packed full enough of brisket that at least a third of the brisket instantly fell off when I picked the up the stiff brioche bun. My repeated attempts to impale the brisket with my fork failed; it was simply too tender, tearing apart into finely-shredded threads that suffused the air with even more brisket-y goodness. 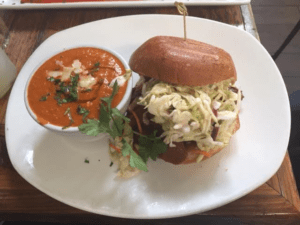 Soaked in a delicious barbecue sauce that, if anything, made it even more tender, the brisket tasted like heaven on my tongue if heaven came with a helping of diabetes. I could feel my arteries clogging and my heart protesting with every bite I took: but it was more than worth it. When I finally packed the brisket onto my sandwich, clamping my hands around it in order to avert catastrophe the second time around, I devoured it in what seemed like four fast bites. That’s not to say it was not enough, like my earlier complaint with Gotts. I was simply so desperate to eat the most delicious meal I’ve had in recent memory. With the last bite of buttery-soft brisket dissolving on my tongue, I turned my attention to the tomato soup that came on the side.

My opinions about vegetables in general and tomatoes (I don’t care if they’re technically fruits. Do you find tomatoes in a fruit salad? Do you find them in the little plastic syrup cups? Those are delicious, by the way) in particular can be best described with a “no.” I’ve been told I have the palate of a kindergartner; I enjoy Kraft Mac and Cheese more than most meals and have probably eaten more candy corn than actual corn. I’m saying this because I want you to understand the mindset with which I was viewing the tomato soup, the first tomato soup I’d ever eaten not from a Campbell’s can. I didn’t think anything could dampen the divine meal I had just eaten, but I was hardly expecting to be doing anything more than suffering through it. Surely, no matter what miracles the Local Union kitchen could whisk up, they couldn’t make what amounted to glorified ketchup taste good, right? 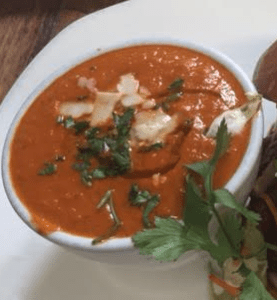 Wrong. Every bite of the soup I had tasted better than the last, and as Ben watched, amazed (he knows best of all the closest things to vegetables that I eat regularly are probably french fries), I began wolfing it down. It had just the right consistency, more thick than watery but not unbearably so, with a taste that was hard to pin down except as tomatoes but… better, fresh and creamy and indescribably delicious. This is just about the only vegetable-esque meal that gets the Jasper seal of approval and combined with the overall heaven that was the brisket sandwich, I easily name Local Union 271 as the best place I’ve visited as part of Bear Bites.

Ben:
All in all, I think both Jasper and I have reached an agreement, specifically that Local Union 271 is one of, if not the best (My favorite is still the Refuge, but they’re both amazing) restaurants we’ve been to before, both on Bear Bites and in our daily lives. Price wise, it falls somewhere on the upper end of the affordable scale, however, the portion sizes were quite hearty and easily worth the price. We both adored our food, as it was both fresh, filling, and affordable, and something about farm-to-table food, particularly comfort food, radiates a sense of ingenuity and wholesome homeliness, which was only reinforced by the large list of farms in the Pacific states from which Local Union 271 buys their produce. The biggest signifier that a meal is amazing, at least in my eyes, is when despite my decreasing stomach capacity, I can’t stop myself from going in to get one more bite, then one more, then another, until either my plate is cleaned, I’m about to burst, or both. After a short consultation, the Bear Bites Team (aka. two hungry idiots with a car and too much time on our hands) wholeheartedly awards Local Union 271 with a full five out of five stars and the additional title of being our favorite restaurant of 2017.

Bonus Protip: Pick up a coffee at the Philz Coffee on Forest and Alma afterward to add the perfect cap to a perfect meal!