Battle of the Bands: Behind the Scenes Commentary 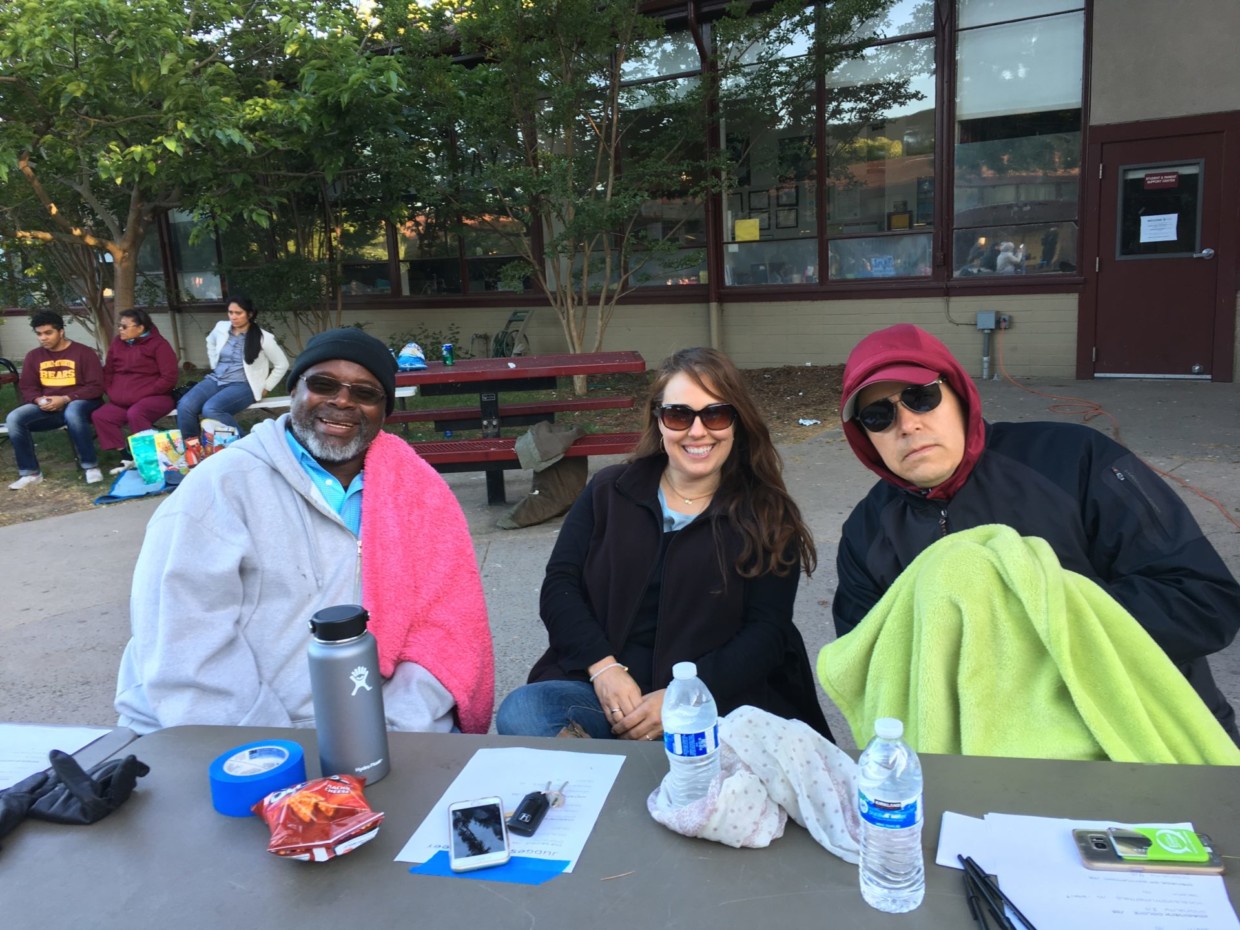 The Battle of the Bands took place on Friday from 6-9 p.m. There were seven student bands that performed various pieces of music like rock, heavy metal, and pop songs. While it was a chilly night, the performance was an overall success and a very competitive battle. Here is some behind the scenes commentary from leadership, the three critical judges, several talented band members, and a few M-A student viewers!

The three M-A staff judges this year were Lisa Otsuka, Mike Molieri, and Sam Stevens. As they analyzed the bands, there were several criteria they looked for.

Otsuka searched for teamwork and charisma. “I like to see the dancers going out there spontaneously. We are looking for enthusiasm, passion, and a band that works well together.”

Stevens said that he would wait until the end to compare. “Everyone is good but it always comes down to the end.”

Lastly, it’s Molieri’s first year judging, and he is honored to look for individuality. “I look for originality. I am looking for some soul music,” he said.

However, judging these talented bands was not easy. For each band, Molieri had to ask himself this question, “How do you separate the bands? What makes one better than the other?”

This band started off the night with three songs: “This Love,” “Stay,” and “Payphone.” Kevin Delgado was the main singer in “Payphone.” The experience, he described, was “fantastic.” While the band members didn’t look it, they formed a band just two months ago, and its members hurried to get songs down and ready for this big performance.

“We have progressed a lot. We kind of just put this together in a couple of days. We just played with the drummer the first time today,” said Marco Antonio Garcia. Overall, on a scale of one being the worst and ten being the best, the band thinks they played at least a five. 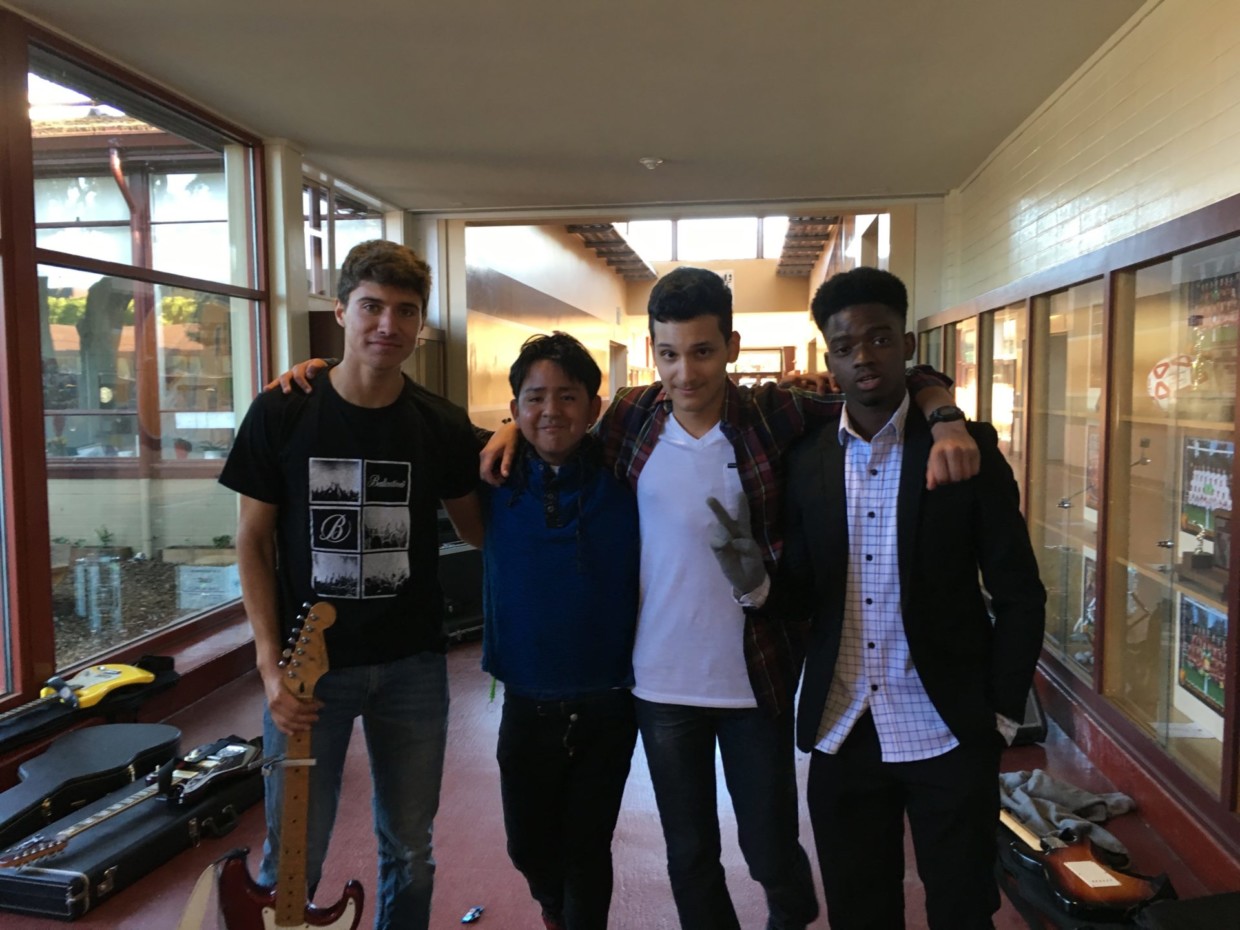 After the Daniels’ pop music, Imaginary Colors’ rock was quite a nice change of pace. While it was hard to read sheet music in the chilly wind, percussionist Soren Hawkins thinks the band played quite well on stage. “There is always some hiccups in any performance, but I think we played our best out there,” he said.

It’s Hawkins’ eighth year playing the drums, but the band just got organized about one month ago. “I think a lot of progress has been made over the course of the month from when we started,” he exclaimed.

The biggest challenge of performing as a band is “playing with other people … It’s about more than syncing up. You have to get everything right, and if you mess up, it’s not just on you, it’s on the rest of the band,” described Hawkins. 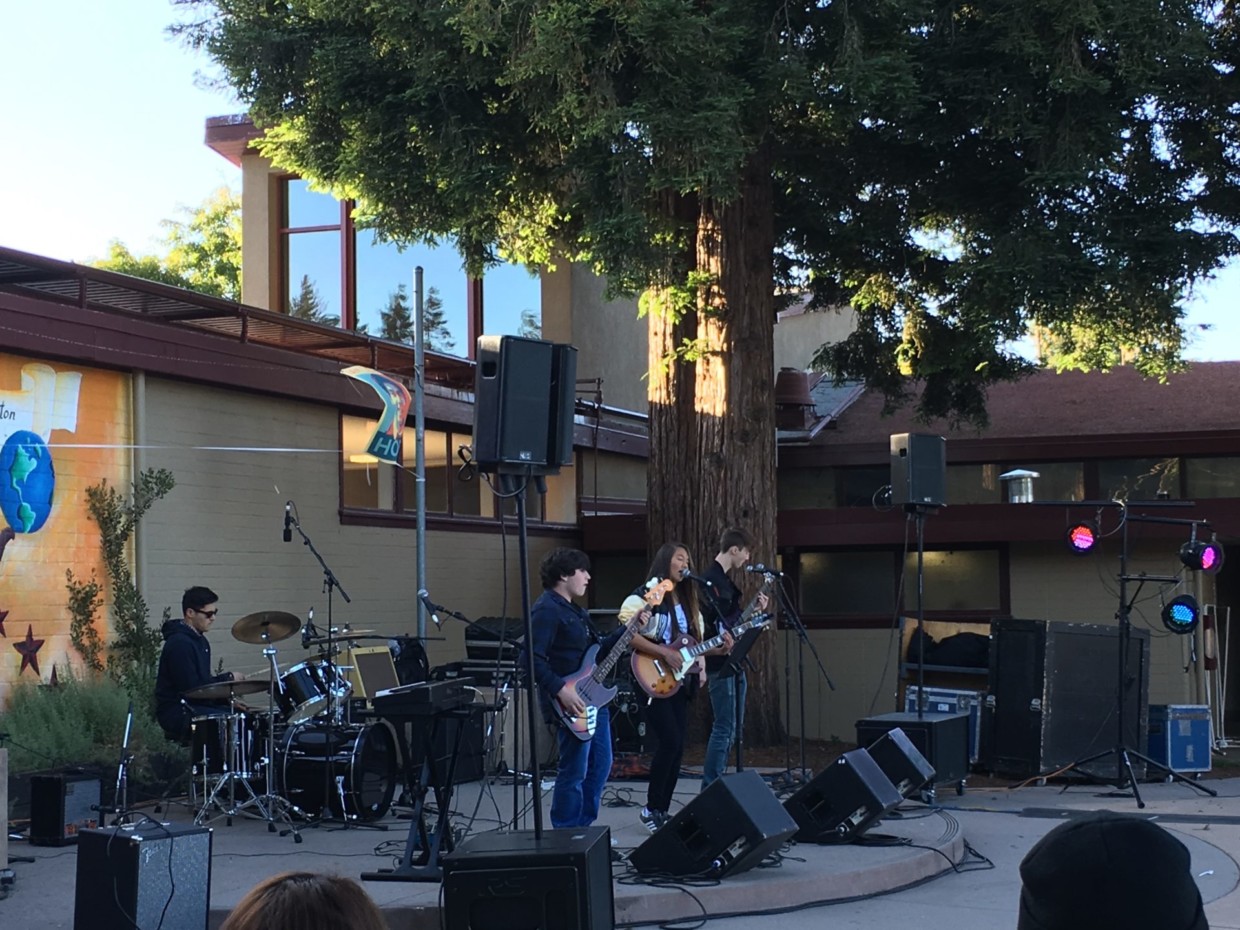 Like many other students, sophomore Anna Leake was relaxing with a few of her friends on a blanket to enjoy the good music and a Friday night. She was astounded with the bands, especially the singers.

“The singers here are really professional! I would definitely come back and watch them again because they are really good, and you can tell they have been practicing a lot,” she explained.

This year Leake noticed improvement: “What I was surprised about was actually the talent of the singers. Last year’s singers were good, but this year everyone just seems a lot more better. That’s not right grammatically, but they are just better!”

This next band’s heavy metal music and enthusiasm received many compliments from visitors and the judges. Seniors Alex Brieger, Caroline Murphy, and Angelica Lopez go to many concerts together, but M.O.C. left them in awe. “I think they’re really good. They are metal, and they were themselves. They were very ‘badsie,’” they agreed.

Otsuka thought Menace of Corruption was a great example of how a band should work together. She reflected, “Some serious growth from last year. They were great last year, one of the strongest bands, but this year you could tell they have been really working together.” 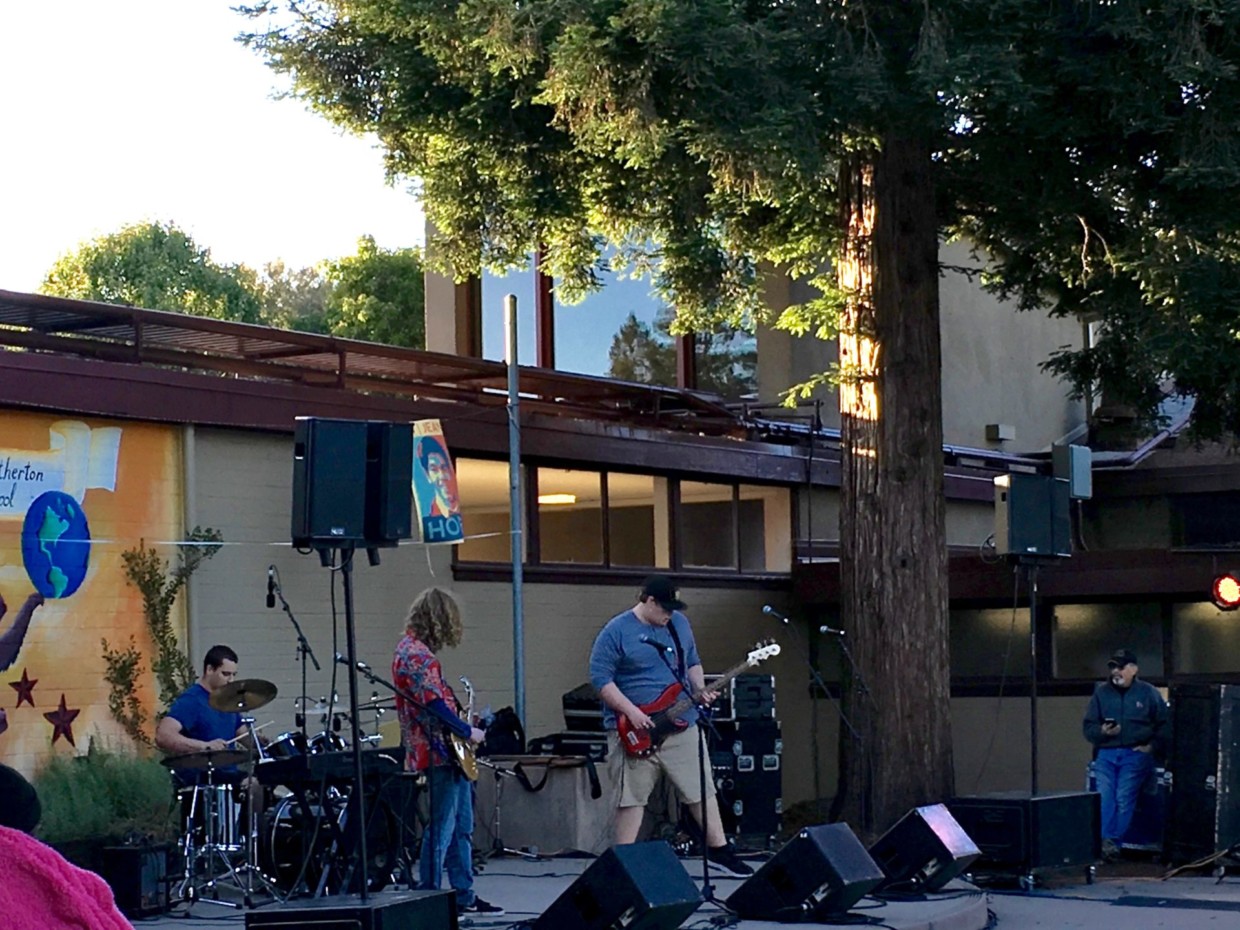 It’s Qianchi Chen’s first year organizing the Battle of the Bands. The process took a couple of months, but it wasn’t difficult to find interested bands.

“The people in the school are really interested about this, and every year they are really excited to come. We make posters and flyers and post them around the school. If people see it, they submit their information to our email, and we will take a look at them,” she explained. 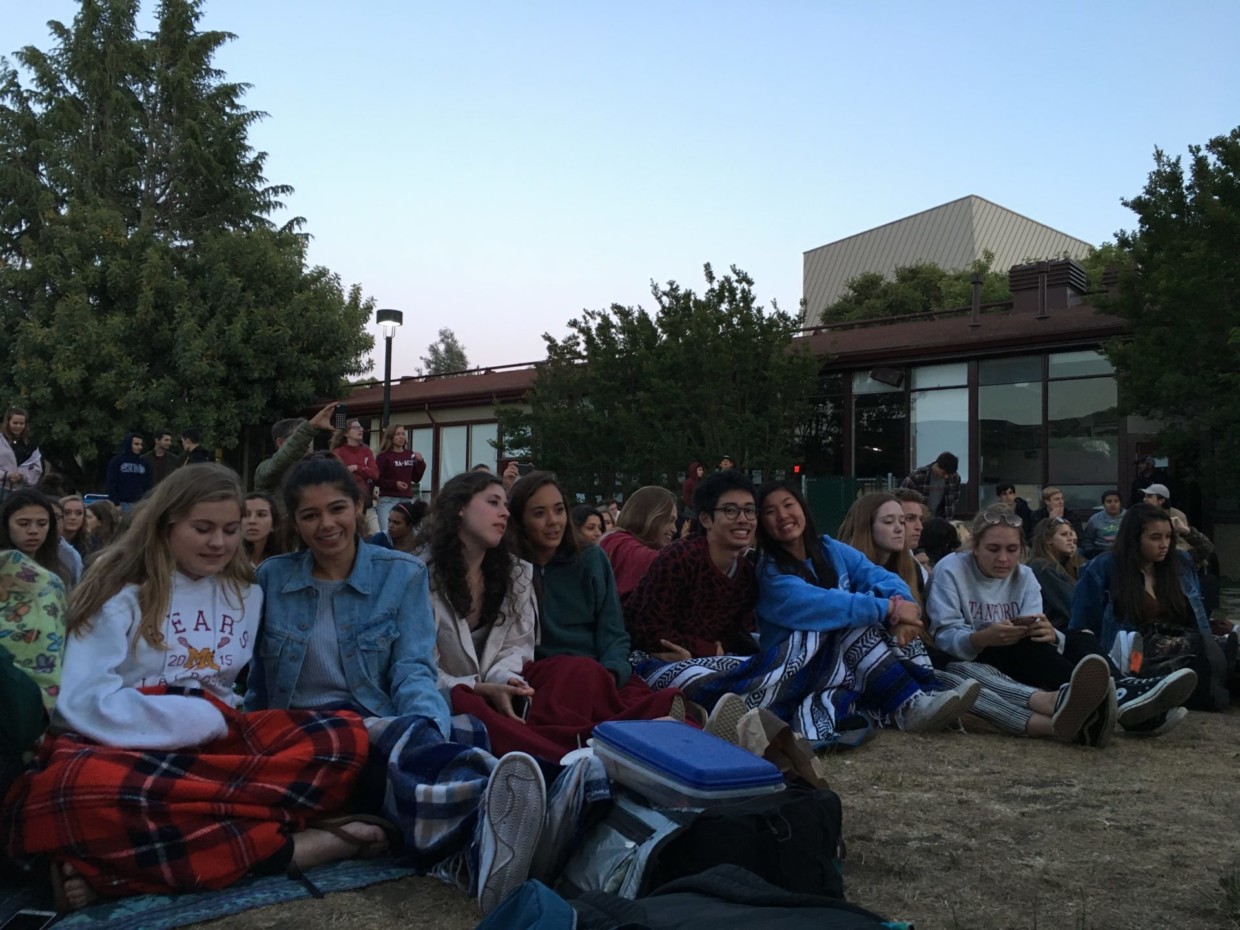 Band 4: Above the Weather

This rock band is a mix of freshmen, sophomores, and juniors, and for most of them, it’s their fifth year playing together. The band is quite experienced from performing gigs and other performances. “We have played all over the place,” said guitarist Neel Sinha.

At the Battle of the Bands, the members felt that they played well given that they only practiced for a week. “I think we did pretty good. There were a few mistakes here and there but that doesn’t really matter because I felt like we brought the energy,” said percussionist Zack Wilhite.

The band’s main singer, junior Kaitlyn Tonsfeldt is relatively new to the band, starting just nine months ago. She commented on its community aspect. “I didn’t know these guys at all when I joined the band, but now they are some of my good friends that I trust and rely on … I love playing gigs and stuff with them. Sometimes we get paid and that’s cool, but basically, we just have fun together and just enjoy the music.”

Win or lose, the band has high hopes for the future. “We are trying to go pro — start to write our own songs, tour like California, tour like somewhere, tour Idaho! That would be so cool,” said Wilhite. 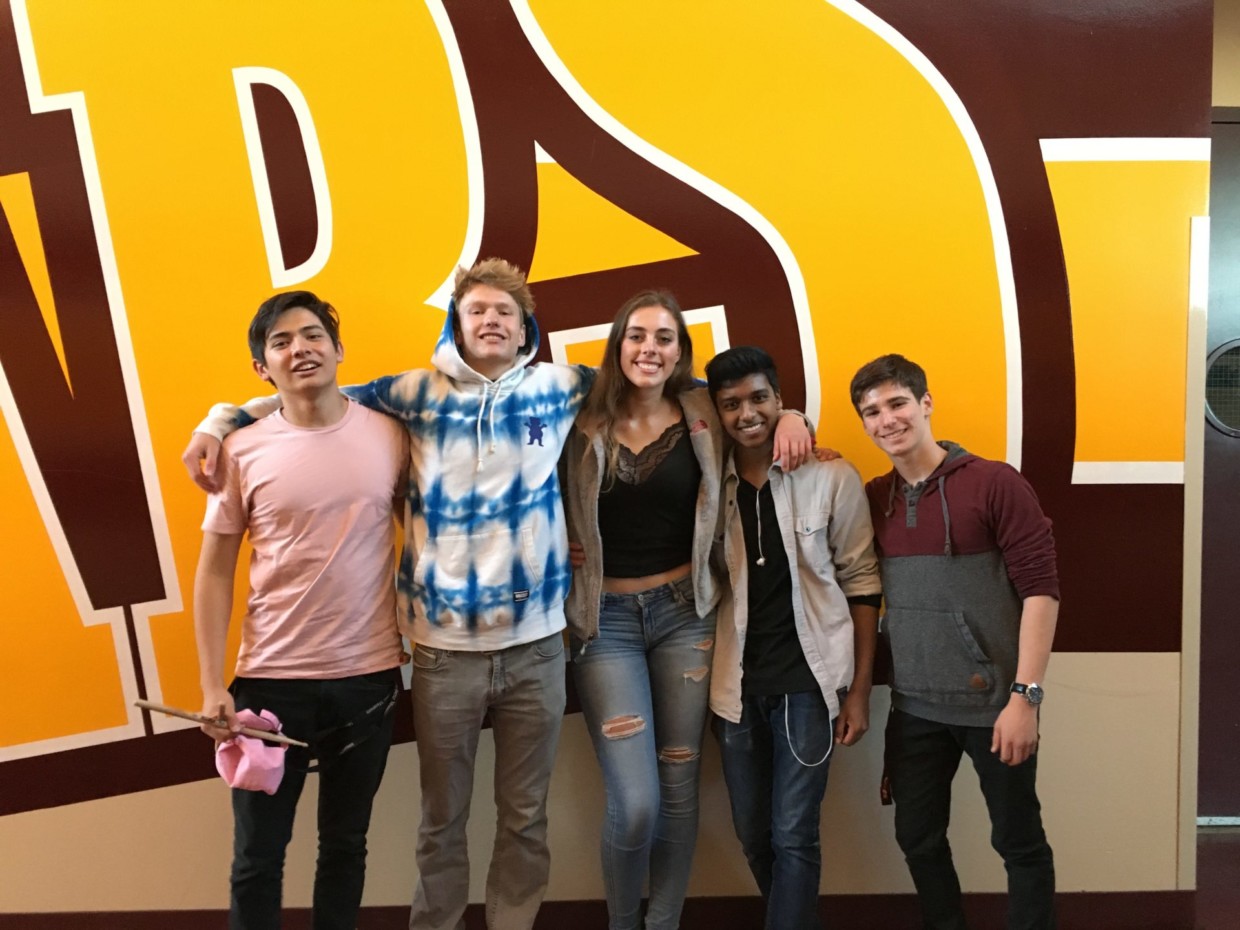 Junior Laura Parisi loved the performance. This is her third year in M-A’s orchestra, but the music at this event was something special for her. “I have had my fair share of music, but this is something totally different. These pieces are more modern and rock, and I love it,” she said. 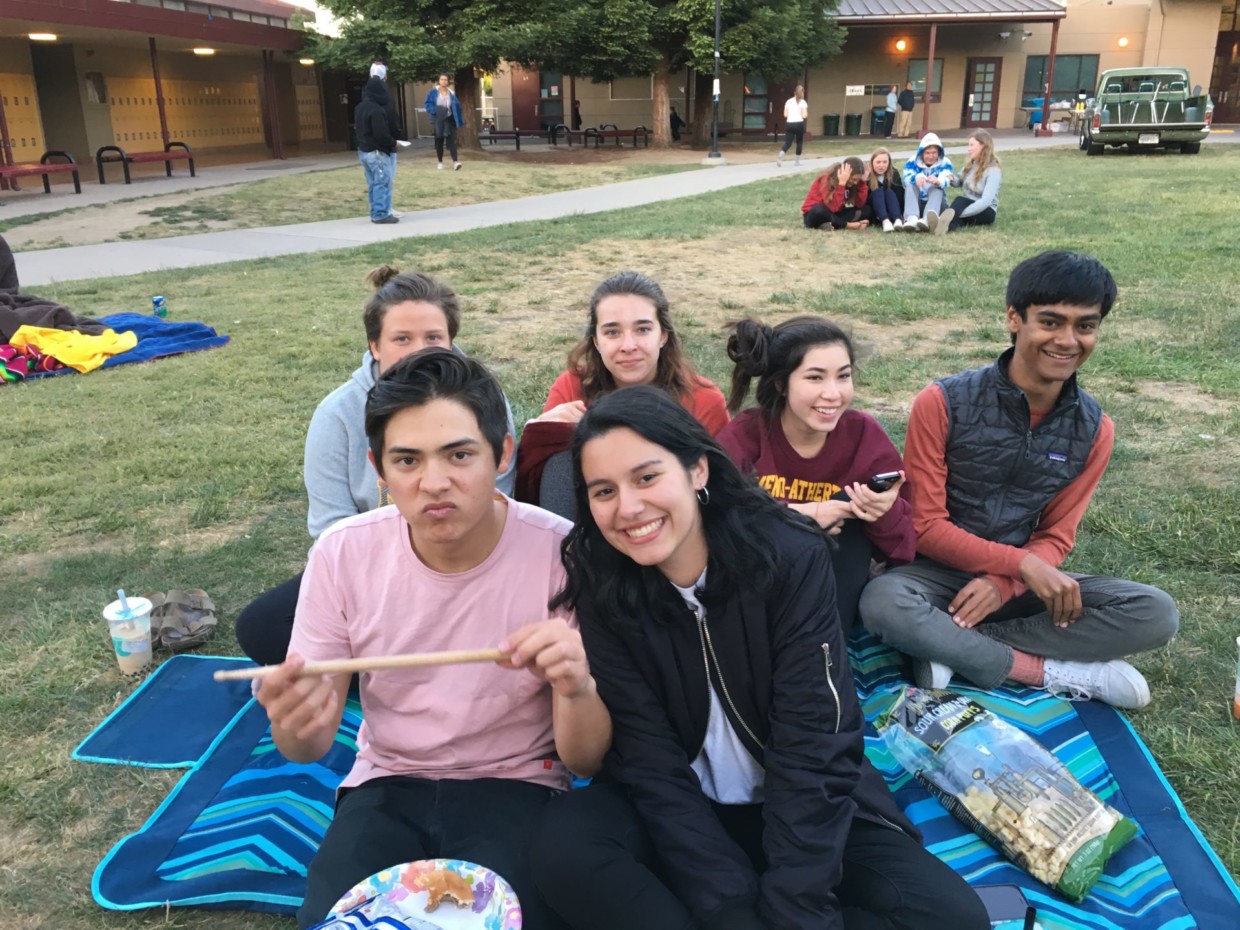 Her favorite band was Above the Weather. “My boy Zack’s in it. Also, I just love their song choice. I have a lot of friends in it too,” she said.

Overall, she was amazed at the abilities and dedication of her friends. “I just love how like everyone, even people you don’t expect, have musical talent.”

Through personal experience in orchestra, she knows how beneficial it is to be in a band. “You can really make some strong bonds because music takes you places, it really does.”

Band 5: John and the Children

They have only been a band for about a week. Member of the band Matt Gursky said the performance “was alright. We could have done better and should have practiced more.”

With more time, they felt they could have been better. “We all have very busy schedules. Matt is actually a surgeon on the side, and I like to play a lot of chess, and Kiana is very interested in cats,” laughed singer Giselle Martinez about her fellow band members.

However, Gursky was happy about the duet singers Martinez and Kiana Sales and said, “they sang like angels.” 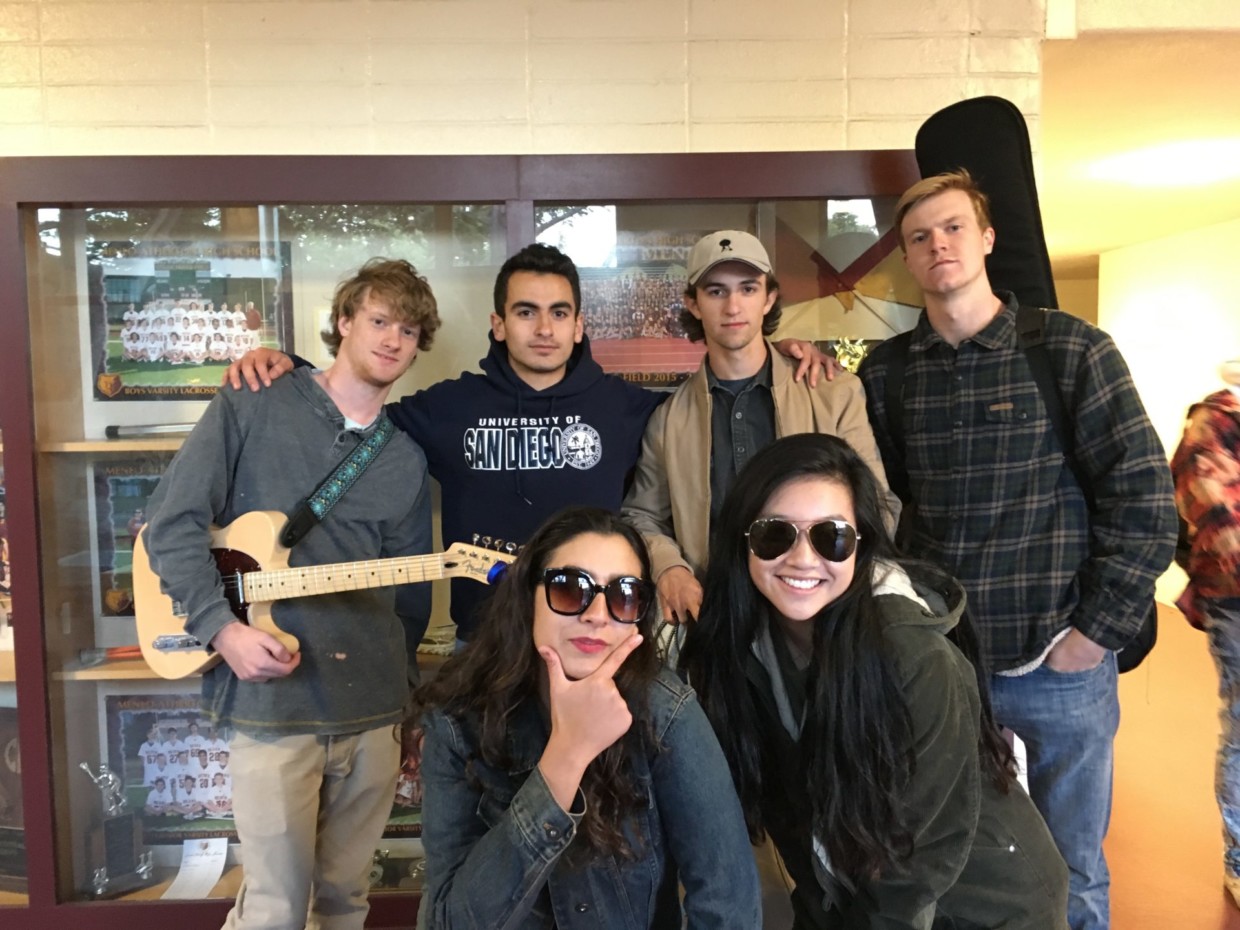 This modern/alternative rock band played four songs Friday: “Can’t Stop” by Red Hot Chili Peppers, “I Will Wait” by Mumford & Sons, “The Funeral” by Band of Horses, and “All The Small Things” by Blink-182.

The band members were Jackson Confer on bass and guitar, Heath Hooper on guitar and bass, Christian Wiseman on piano, Kennedy Ojeda on drums, and Nora Siegler and Hannah Elisofon on vocals. 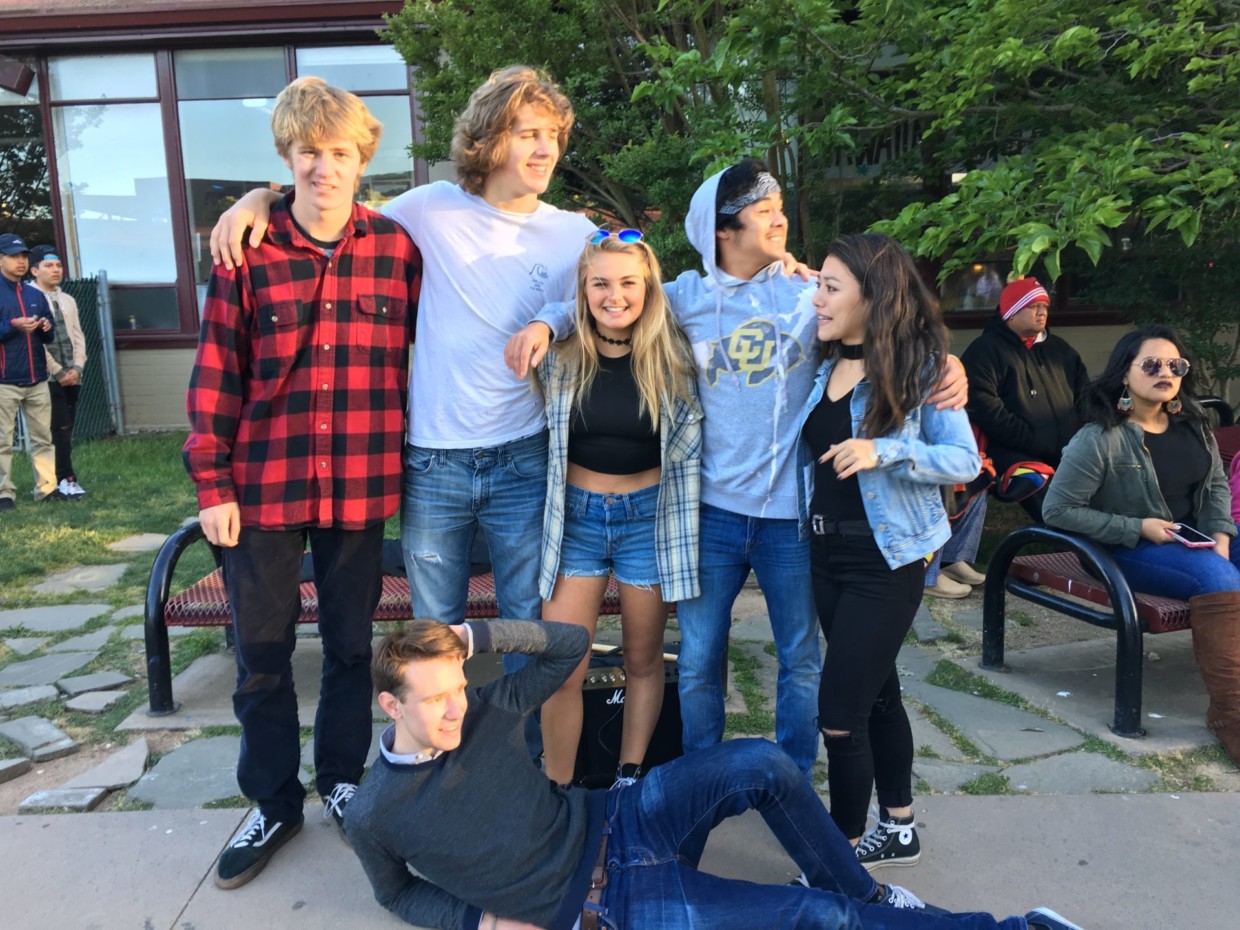 The Absolutely Unsure band members pose for a picture before their performance. Credit: Kumali Schoen/M-A Chronicle. 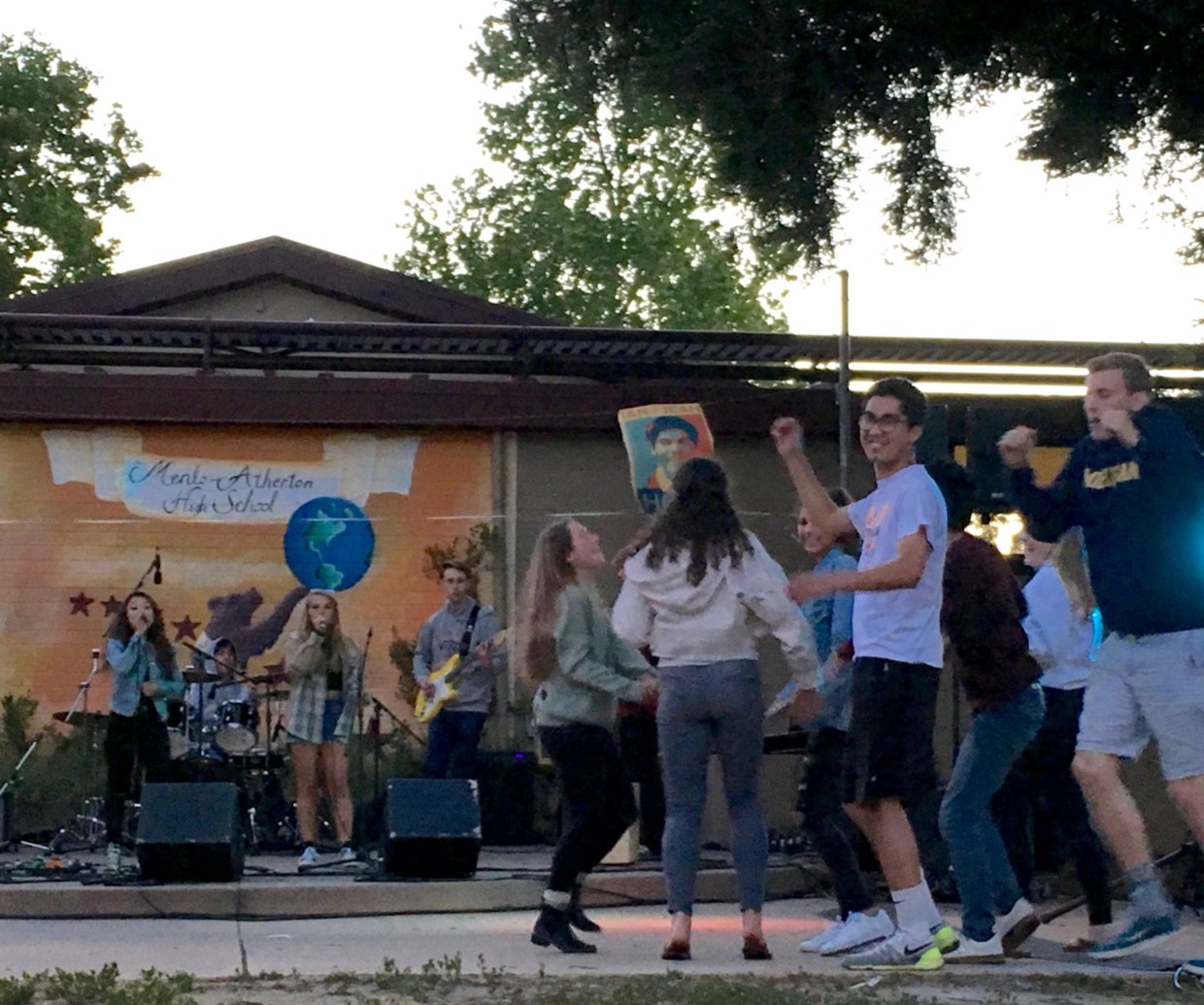 This band is made by a group of Polynesian students, many of whom are close friends or family. Freshman Naia Dnu, the coronet player, just started the band this year. “Oh, I was messing up a lot because I was kinda of nervous because it was my first time. Overall, we did good. It’s just fun being around all of [the band members],” he described.

This band was last but not the least, and after a judges conference, they decided Tribe was the winner of the 2017 Battle of the Bands! 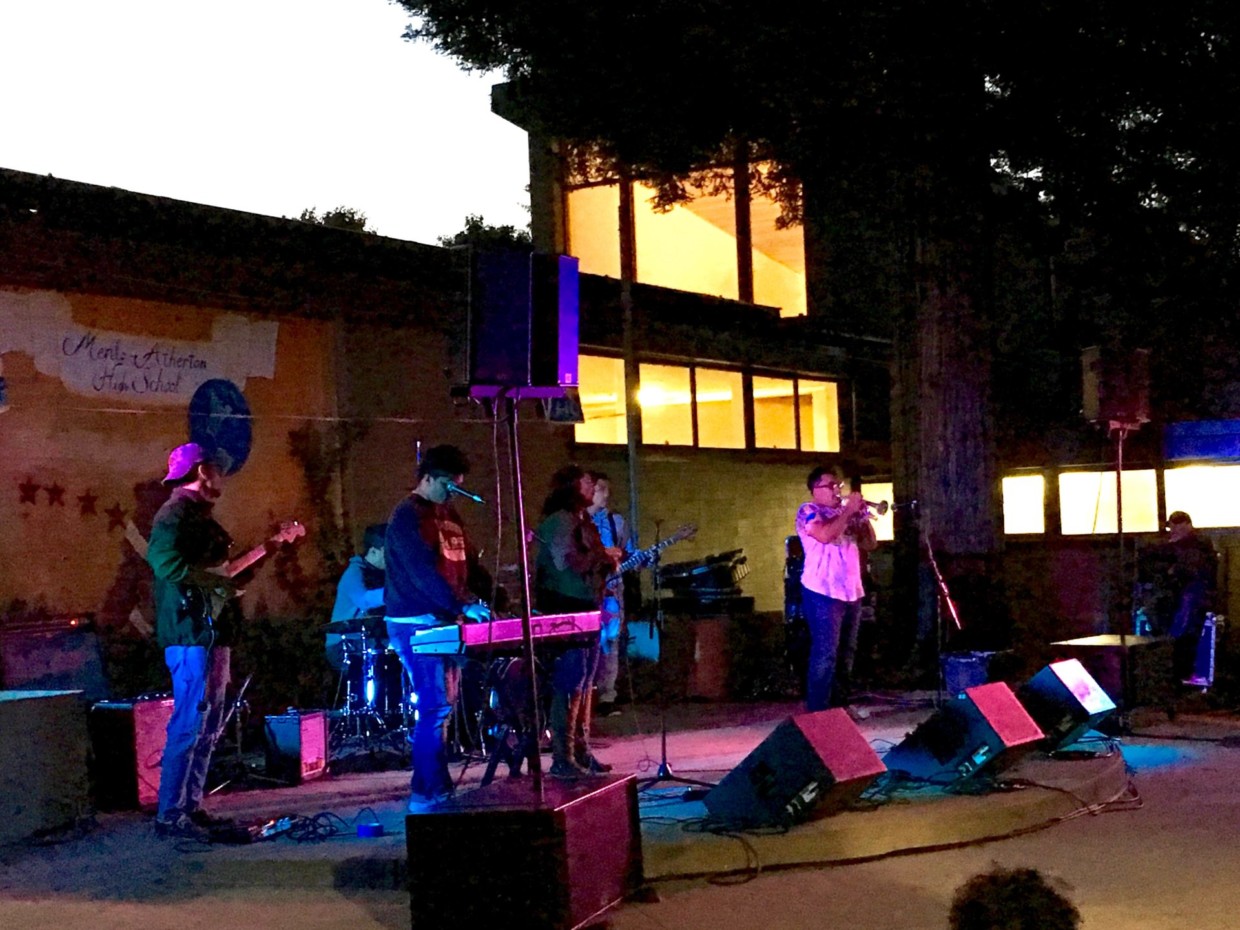 The band Tribe plays under colorful lights, as the final performance of the night. Credit: Kumali Schoen / M-A Chronicle.