The global pandemic has forced musical artists to postpone tour dates indefinitely, some singers have turned to virtual performances. As a concert lover, I finally attended my first virtual concert to see former One Direction member Niall Horan perform live at the prestigious Royal Albert Hall Saturday night. While not the same as in person shows, virtual concerts propose new possibilities for the music industry as they are more accessible.

It’s disappointing that we are unable to see our favorite artists live, but the greatest issue with all tours at a standstill is that many tour crews are left without a stable income. Horan organized this event to raise money for his own crew and the #WeNeedCrew relief fund in response to the UK government’s failure to provide financial support for tour crews.

Horan said, “I’m putting on this gig to try and raise awareness of the immense value they bring to an industry enjoyed by so many, and do something to help them and their families. I ask all my fans to support them with me and buy a ticket if you can, and I encourage all artists to do the same.” When playing the last song, the lights were raised to reveal the crew dismantling the stage, stressing the importance of the crew, as Horan calls them, “the engine room of the music industry.”

Horan sold 125,000 tickets, not to mention each ticket likely counted for multiple seats, as most people probably watched with friends and family. Each ticket was $20, meaning Horan, who said every penny went towards crews, raised about $2.5 million without accounting for voluntary donations. Horan performed songs from his two solo albums, Flicker and Heartbreak Weather, and had a surprise duet with Ashe, performing her popular song Moral of the Story. This was the first time they performed the song live together.

Virtual concerts propose an exciting future for the music industry, even after the pandemic. Many artists can follow Horan’s example and use virtual shows as a way to raise money for causes they care about. Online concerts are also a unique opportunity for fans with social anxiety or health issues who are unable to be around large crowds or flashing lights to be able to see their favorite artist live in concert instead of watching shaky, fan recorded, videos.

Virtual concerts are also cheaper, allowing fans who would not usually be able to afford a ticket to show their support. If you are a fan of many artists but don’t want to go broke going to all their concerts, you can see them virtually. Virtual concerts are also more accessible — Horan’s show had fans tuning in from 151 countries. Carrying on and popularizing online concerts after COVID-19 will not pose a risk of replacing in person concerts. Although it is fun to attend concerts in any form, nothing can replace the in person concert experience. If anything, I think popularizing virtual concerts will encourage people to see artists live in person because it is another way for people to find new artists and can be a stepping stone to being a fan of the live music scene.

If you are planning on attending a live concert soon, here are some tips: 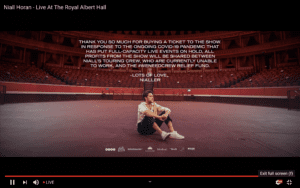 Niall Horan’s message to fans before the show.