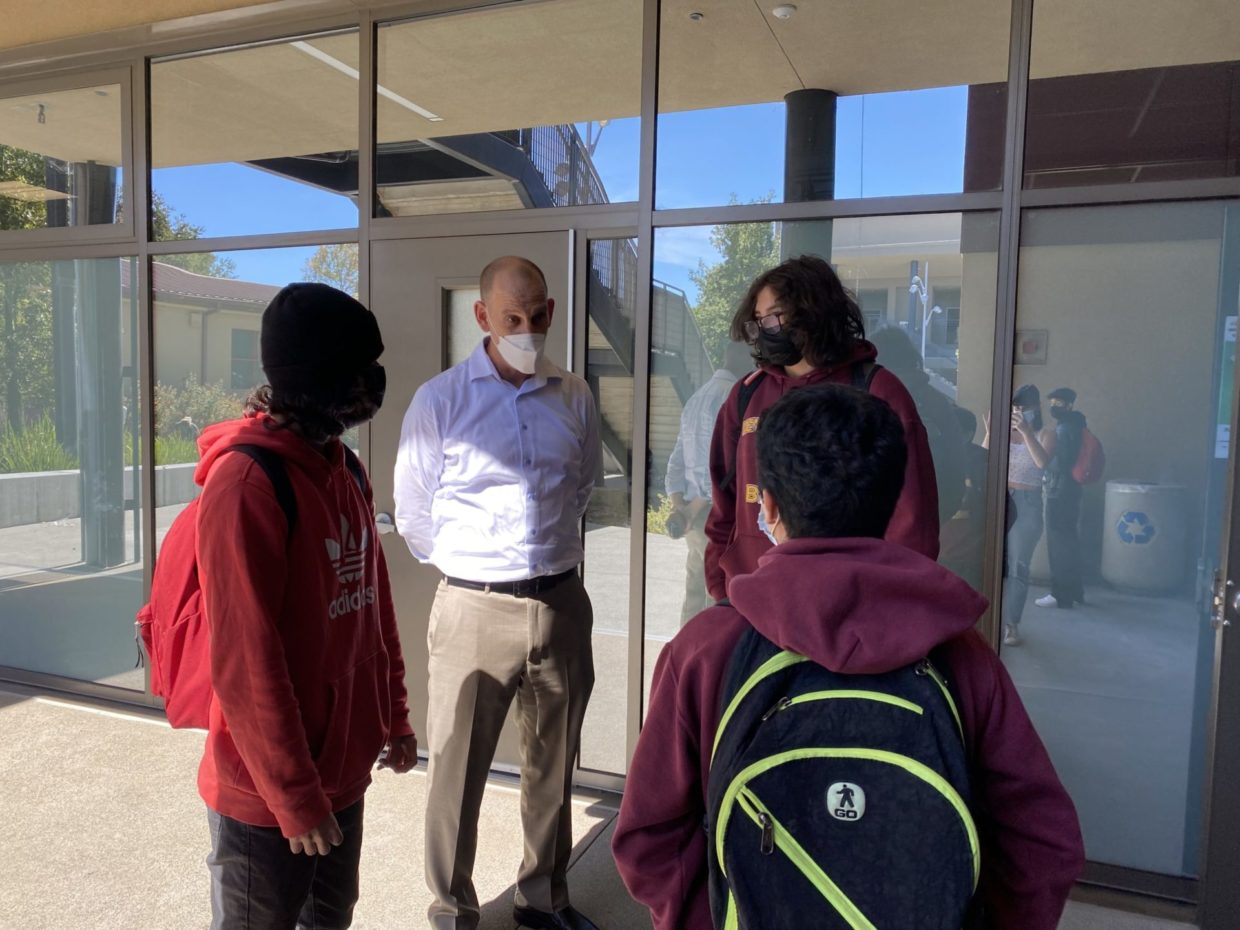 What is your vision for the future of M-A?

It’s common to say ‘we need a stronger community’ or ‘we need to help students connect with the school more,’ but there’s more. This year is about supporting each other… if you’re sick you need to stay home, supporting teachers if they’re sick, How do we create a culture where everybody feels checked in with and taken care of in some way? And that might mean checking in with kids at lunchtime, checking in with kids.. in terms of ‘how’s this class going, how are you doing?’ Are we being flexible in our practices to help kids make up work? I think that’s part of this year’s vision, but it also grows into how do we build a stronger M-A where I think our various student groups and various communities on campus feel more connected as a whole? So I think there’s that process of supporting this year, but then there’s a longer process of ‘how are we engaging different student groups in them having a voice on campus?… I think we work towards it in a variety of ways like opening up a quiet center in B-22 and making a space for kids who are stressed out to go and just cool down. Whether we’re investing in a little bit more, what we call “community liaison work.” And that’s people who can reach out to families and say ‘hey what do you need, how’s school going,’ making that kind of parent connection. Then there’s things we’re doing I think long term, which are… even a new English 1 class, which is bringing kids from different backgrounds into this one class.How can we use an ethnic studies class to facilitate some of those conversations that maybe build connections for the next four years?

You’re kind of often being seen almost as like a man about campus, you’ll walk around and you’ll talk to different students at lunch. And so if you can delve into why you are doing that, what’s the thinking behind that?

It’s hard to be the principal of the school if I don’t have some sense of how kids are feeling out on campus or what’s going on in the classroom. A part of it is just like how do I get connected? A part of it is being one of the people here that wants to be out there checking in with kids. But it’s also how I am a part of that culture, where I can go and hear what kids experience on campus?… I try to go up to people and ask them pretty basic questions, but I’d like to have other conversations. A couple months ago, I started asking kids about how they felt about Afghanistan. It’s just, how do we be a little bit more human on campus? And as the principal, if that’s what I’m asking other people to do I want to be able to do that as well… I hope on some level, it helps students feel that I as the principal care about them and what’s going on at the school, and that if they have concerns or something’s not working there’s a number of people they can go to… and they come talk to me, but if they don’t know who I am or they haven’t met me, that’s a lot harder to do.

And what would you say your guiding principles or ethics are?

I’ve been someone on the campus who was really well? known for being a driver of collaboration amongst staff, being passionate about ‘how do we create structures where staff can collaborate and work together?’ My job here is a little bit more: ‘How am I helping shape the vision of the school?’ And so carrying those principles forward of ‘how do we learn from each other?’ One of the things I’m going to try to do this year is have several student lunches. So I talked to our bilingual resource teacher who’s going to go pull six or seven English learner students. And we’re going to buy the pizza, we’re going to sit here, and I’m going to learn about their experience. My hope is that we’re going to do that with different student groups several times this year. The core principle is ‘how do we learn from each other, how do we support each other in the process of living in a high school for four years? And how do we grow?’

We’re in this era of pedagogical equity and equality and moving towards a more wholesome learning or well-rounded learning environment. So much of that is focused within the classroom, but how do you see admin fitting into this new era?

Some of that we support by supporting new classes like an English 1 class at a school where there’s no longer an honors English one class. It really came about through English department interest over time. But it needs administrative support.And then some of it is supporting the culture of how are we expecting more student interaction in the classroom? One is by putting everybody in the same class but on another level l it’s also about creating the expectation that we want more structured student interaction. Having lunches with different groups of students is one way of doing that. Investing in greater parent outreach, I think, is one way of doing that, how do we connect with families and say ‘hey how’s your, how’s your son or daughter’s experience at the school? What do you need.? Do you feel like you can be involved in the school and then support the school?’

I respect the people who’ve had this job previously greatly, I’ve worked with them, we’ve done to them and I think they’ve done a great job. I kind of look at it more as, how do keep going and how do we keep improving? If you’re talking about a core principle, I believe we’re always trying to evolve. I think any mistakes we made have always been well intentioned as long as I’ve been at the school, and we’re trying to do the best job we can. But you also, you do things that were successful and you realize that you’re still not meeting the needs of all students. So we’re just continuing to evolve and wondering, how do we help more students feel connected and valued in the school? I don’t think that means we have to necessarily make a radical shift. I don’t see the school as needing a radical shift. I talk to staff about long term English learners, a particular group of students that we need to figure out ‘how can we support these students more?’ It’s not newcomers to the school, but it’s students that have been here, been in the country for a long time. How do we connect them to the school in different ways? Part of it is listening to them and understanding their experiences. So it’s not so much doing something different. Its about ‘How can I make M-A be a better place for more kids.’

What would you say has surprised you since kind of taking on this new role as principal?

The amount of public speaking involved. I don’t think I was aware of how much it was called upon in the job to be kind of the, the voice of M-A, so to speak, and whether that’s just speaking to a parent group or speaking to the staff or sending out an email.

Many parents are almost, I would say, hesitant of the direction M-A is going in. As many people are excited about the introduction of English 1, many people were angry about the loss of AS English 1. And so, what would you say to them as MA is continuing down this path?

I think I probably use the word healthy, like ‘how do we create a more healthy educational experience?’ One that is well rounded, that helps our kids connect with different perspectives. I think we could get out of our silos and listen to the different experiences that are here on campus, and share our experiences and learn together a little bit more. That’s a challenging thing to do, to sit in a classroom and have an engaging conversation on a topic that you’re not going to agree with everybody on. How do we do that well? And that’s rigorous, that’s hard. Some of it might be a shift in ‘what do we think is rigorous education?’ We’re looking at it a little bit more this is a rigorous as we have to teach our young people how to interact with others And that’s something I think we can do better but it’s hard. I’d also say that the school still provides more opportunities than ever before. And I said it in a meeting recently that once I counted it up, we are offering more AP courses this year than we’ve ever offered in my time at M-A. I think if students stick with M-A, they’re going to find the range of opportunities to be incredible. And I think that could be whether that’s academic or CTE or elective, there’s more opportunities here than there ever has been.

In my experience so far, it’s been a really fun job, and being a principal is amazing, exciting and fun, and I feel honored to do it. And I’m really excited to support students and staff and families.