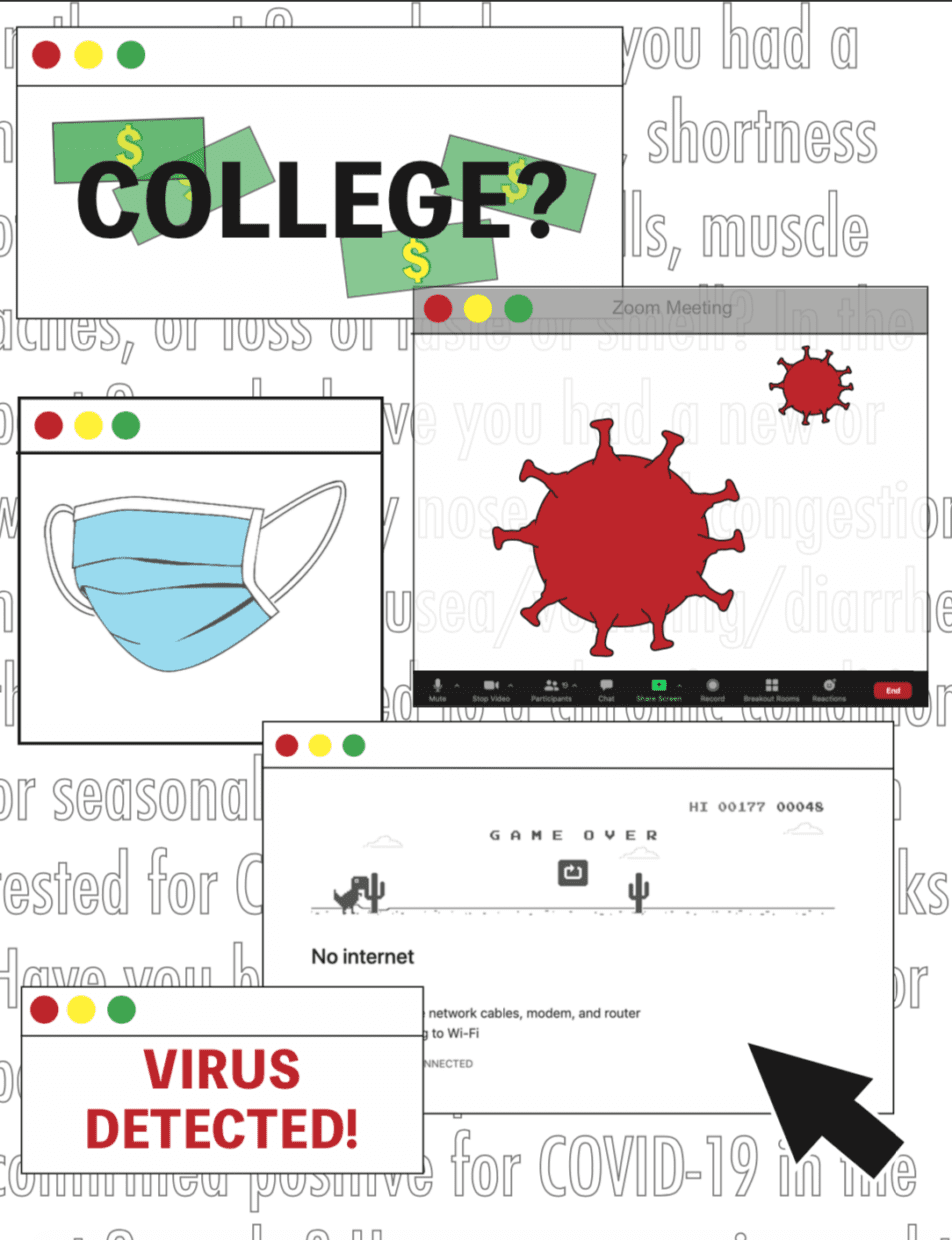 What it’s Like Living on College Campuses During Covid-19

For the 2020 fall semester, many universities and colleges are adapting to the pandemic. Some campuses opted to continue in-person, while others chose to adapt to “remote” learning. Former M-A students explained their experiences as college students during the pandemic.

Freshman Ethan Mimeles explained the layout of his first year at Elon University, “everyone’s living on campus and the classes are hybrid — so some days are in person, and some days they’re online.”

Mimeles described his regular sports practices, “The first week is in small groups. We recently had to cancel because there’s a huge spike in the athletic teams. If we pass, then we can start practicing again but it is still in a separated group.”

Even though students are not constricted to cohorts or certain groups, Mimeles said that the social atmosphere is, “just a lot weirder than it would normally be because everyone’s not socializing as much because they don’t want to get sick. They’re fearful and kind of reluctant to just go out and talk to people.”

Mimeles describes how students deal with meal times, “For the past two weeks, we would have to go in there and then take our food. We couldn’t go inside anymore because there’s a spike in cases.”

Similarly, second year Amherst student Anna Leake experiences outdoor cafeteria dining. “We pre-order meals at a specific time. And when the time comes, we file in a line outside the cafeteria and they check our temperatures at the door as well as our phones to see our time slots. Then, the food is served buffet-style and after leaving the cafeteria you can eat outside in a tent or go back to your dorm or pods.”

“Just recently, the campus is allowing deliveries off-campus on certain days. Students were upset before because off-campus deliveries were not allowed,”  Leake continued.

Leake currently lives on-campus with “about 1,200 students on campus right now, mostly freshmen and sophomore and a handful of seniors.”

Leake explained that she prefers to take a variety of in-person classes, saying, “I am taking a playwriting class where we all sit outside in these tents. We just sit in a circle and talk about our feelings and it’s just nice being outdoors and looking at the fall leaves.”

Alternatively, students could quarantine before arriving on campus. Leake further described, “If you do not test before coming to campus, then you have to quarantine for a week on campus and then take three tests that must all have negative results. As of right now, students take tests three times a week: Sunday, Tuesday, and Thursday. They also made us take flu shots a few weeks ago.”

“I think that the biggest difference from last year and this year is that we can’t congregate and that has definitely changed the social dynamic. People have more one-on-one conversations but it’s harder to have small talk or keep acquaintances which is kind of sad,” said Leake.

Even though the social dynamic may seem to change for the worse, students are finding ways to compensate.

UC Davis junior Tori Rarick said, “I know one of my classes has tried to make a ‘coffee shop ‘and it’s on zoom and a place where people can just talk.”

Rarick does not study on-campus, but is experiencing remote learning near the campus. Rarick remarked, “I guess it’s just kind of weird like getting used to how it is. Now, professors will be like ‘oh can everyone turn on their camera?’ I guess it’s just weird seeing how the professor during the summer would post pre-recorded lectures and not teach you at all, but now, classes are much more interactive.”

Even though the college experience is different, it has given the chance for students to adapt.

Mimeles stated, “Every aspect of college from academics to social to athletics — everything is limited and different than what it normally would be.”

Leake reflected, “I think that it’s interesting to see everyone’s reaction to COVID. You see when it is acceptable to break or bend the rules and when it is not. Some people are willing to take off their masks in some contexts and others are uncomfortable even meeting with others.”